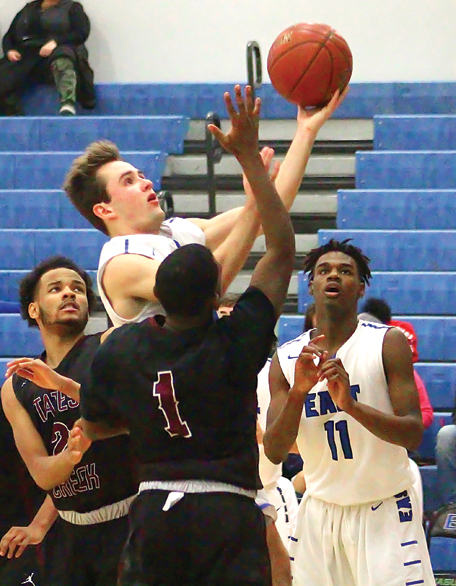 The East Jessamine High School boys basketball team won a nail-biter at the Jaguar Classic Saturday, rallying to edge Tates Creek with time running out in the 4th quarter by a score of 60-59.

De’Anta Sanon scored 23 points, while Jacob Bradshaw added 11 points and Will O’Bryan had 10 of his own.

Ben Thompson scored nine points while playing tight defense on the perimeter and hustling for every loose ball within reach.

The Jags started off slowly in the first half, scoring only 10 points in a first quarter marked by back-and-forth possessions and tough defense on the part of both teams. When the Commodores came to halftime, however, they held a 10-point lead over East Jessamine.

Once the fourth quarter began, the Jags were facing a 12-point deficit. But a pair of 3-pointers from O’Bryan, along with Bradshaw scoring seven of his 11 points on the night (including the two key free throws that gave the Jags the lead for good), made the difference for the tournament host.

“Bradshaw being the senior that he is, he focuses on the next play,” East coach Chris O’Bryan said. “He didn’t play very well at times, got a couple of charges called on him, made a couple of mental mistakes, but that’s what your senior leaders have got to do.

“I couldn’t be more proud of the fourth quarter that he played, because he managed to contain himself, play within himself, and when he does that he’s a really good player.”

“He went 15-of-17 from the line,” O’Bryan said. “That’s just tremendous. He’s just such a phenomenal kid. If you got to know him, he’s one of the best kids we’ve ever had in this program.”

Nobody else shot more than two free throws, but the Jaguars shot 21-of-24 overall from the line.

Sanon added eight rebounds, with Tyler Pitney pulling down four boards and Thompson snagging three of his own.