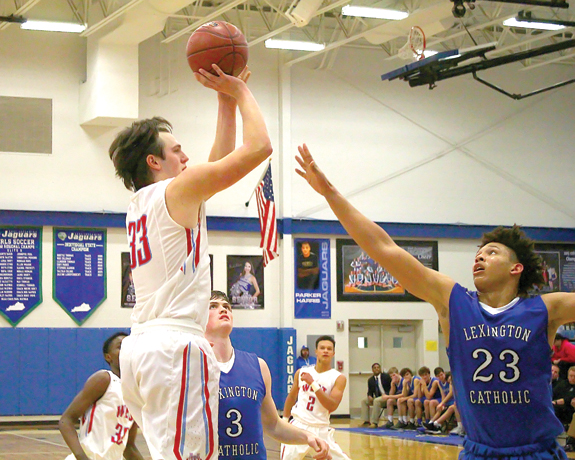 Dalton Bruner led the scoring with 23 points, with Skyler Cannady scoring 22 and Drew Cook adding in 11 points, as the team shot 48.1 percent from the floor.

The Colts also shot 8-of-18 from behind the arc. Oddly enough, they earned only 13 free throw attempts, many of those shots coming in the fourth quarter, but they made 10 of them.

West started out strong, leading the Knights 43-32 going into the second half. The third quarter saw the Knights outscore West 20-7 as the Colts’ shooting touch cooled off considerably (56.7 percent in first half; 36.4 percent in second half). The Knights attacked the glass, scoring 16 second-chance points.

After tying the game at 55 when Cannady went 3-3 at the line after drawing the foul on a 3-point attempt with 6:12 left in the fourth quarter. The Knights slowly pulled away over the next four minutes. With just over two minutes remaining, the ball changed hands five times before Kyle Anderson scored on the fast-break layup to cut Lexington Catholic’s lead to eight, 69-61. The Colts drew within three only seconds later to bring the score to 69-66.

In the game’s final minute, technical fouls were called against Bruner, Anderson and West coach Damon Kelley, leading to the end of the Colts’ offensive threat.

“We have not learned to play with patience and discipline,” Kelley said. “When we look good, we’re going 100 miles per hour. If the ball’s going in the hole, we look awesome. If it’s not, we look horrible.

“I’ve said all year, even when we win, that there’s a lot we have to learn about this game. Playing good competition, those (flaws) get exposed.”

Kelley wants to see the Colts look to the paint first before attacking from the perimeter.

“Right now, we’ve got a lot of finger-pointing going on.”

After losing to Southwestern Jan. 23, 62-51, the Colts (11-5) faced Madison Central Wednesday. The Colts are at Madison Southern Friday before returning home to take on Boyle County Monday.