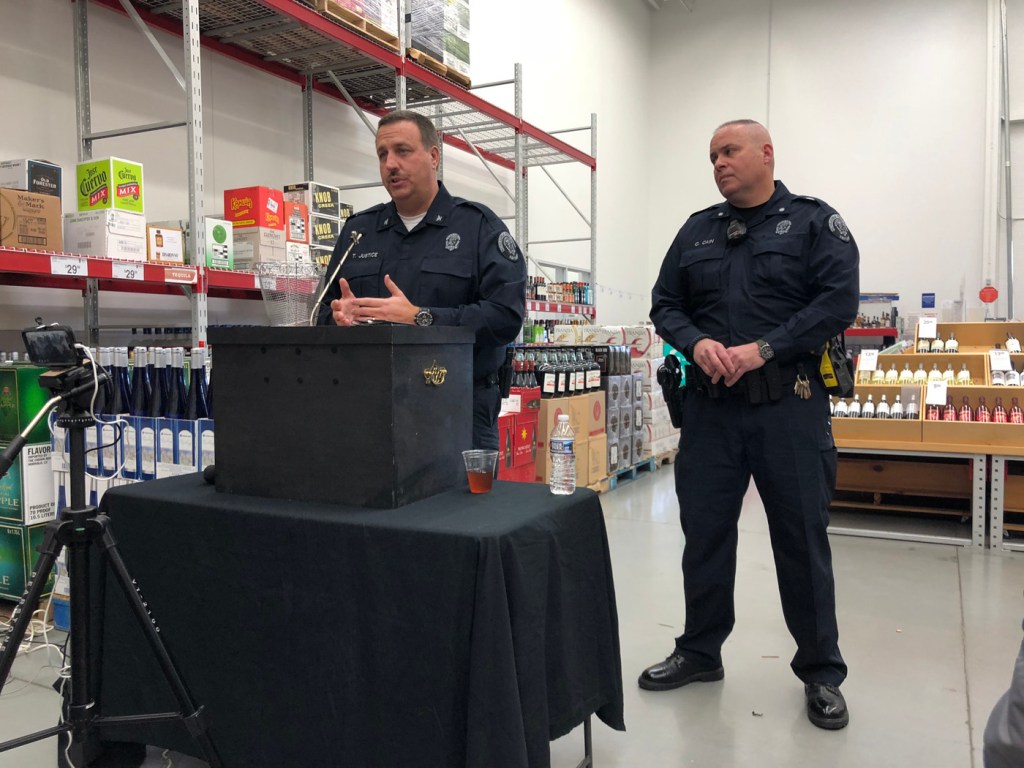 Stepping into his role as Nicholasville’s new chief of police, Todd Justice said he and the new administration have some large shoes to fill.

At Tuesday’s Chamber of Commerce monthly luncheon, Justice and Assistant Chief Chris Cain spoke about their plans for law enforcement in the city.

“We are making changes but nothing drastic,” Justice said. “Our plan is to progress the agency forward into community-style policing. We just want to be open to the public. We have a rule that our next step is all communications need to be wide open. We feel that is the best way, to lead with knowledge. These are not things that were not done in the past, we just want to expand on them.”

The main issue for the new administration is manpower, Justice said. As the ninth largest city in the state, the Nicholasville Police Department is slated for 66 police officers. Justice said the department currently has 12 officers in the academy, three waiting to go into the academy, and they are trying to hire seven more.

Unlike a regular job, Justice explained when the police department hires a new officer the process to get them out in the field and on their own is a little different.

After background, physical agility, polygraph testing and drug screening, a process Justice said could take six to eight months, if the new officer is not certified they are then required to go through the academy in Richmond. The academy, he said, takes 23 weeks to complete with another 14 weeks training locally.

“When it is all said and done and they get out of the academy and get on the road, it is approximately a year or a little more for them to be officers on their own answering calls by themselves,” Justice said. “To keep standards high, we have to pick and choose who we hire. By the end of the year, we hope to have most people trained and out on their own.”

Another area Justice said he plans to focus on is starting an Explorer Program in Jessamine County.

The program, he said, would focus on helping high school students who are interested in a career as a police officer get involved early. The program will give them the tools necessary to eventually stay in Jessamine County with the police department, if they wish to pursue that career path, so the department is not waiting on people outside to stand up and want to become involved, Justice said.

Part of the administration’s community outreach will be to become more involved with the radio station, as well as possibly starting a “Cop and Coffee” meeting at a local coffee shop. Justice said this would enable people from the community to come and ask the officers questions on a regular basis.

“One of our biggest problems and questions we get a lot of the time is, ‘Is Nicholasville a Mayberry?,’” Justice said. “We have big-city crime here just like everywhere else. We are a bedroom community of Lexington. We get all kinds of their crime from people who come here when they get forced out of there.”

Justice pointed out that last year there were homicide cases in Jessamine County.

A lot of the crime in Jessamine County, he said, relates to drugs and theft.

“They usually go hand in hand,” Justice said. “People steal to support habits. Heroin is a big topic. We have seen overdoses decrease and now we are starting to see methamphetamine come back. When you fight one you see the other one come up. It is a never-ending battle.”

Cain said he too believes the police department needs to continue to focus on community service moving forward.

“We partnered with the sheriff’s department recently in our drug units so we can do things together,” Cain said. “We want to join together to go further and make a bigger impact.”

Justice said the department is headed in the right direction.

Wanting to continue to improve and make decisions that are more community oriented, Justice said he sees the department as having a decent reputation in the community and wants to keep it that way.

“We are not striving to change the world, the place has been run well for several years,” Justice said, referring to Chief Barry Waldrop’s retirement after 22 years. “We just want to expand on that and make it a better place and continue to make it one of the best police departments there is.”