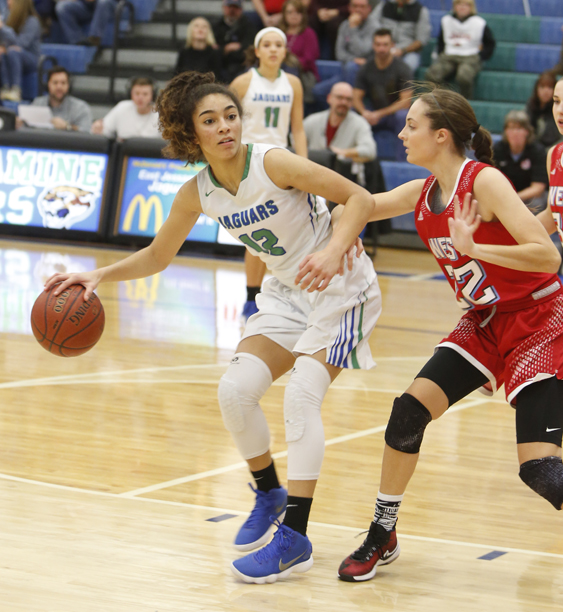 Jalynn Landversicht made sure the East Jessamine girls ended their losing streak to their archrival.

Landversicht scored a career-high 41 points Friday night to lead the East Jessamine girls to a 52-51 victory over West Jessamine in the first meeting of the season between the crosstown rivals.

Landversicht scored 24 of her team’s 27 points in the second half, including 15 in the fourth quarter, to power host East (7-8, 1-2 46th District), which lost all three of its games against West last season. She went 13 for 21 from the field and 13 for 14 at the free throw line to finish three points short of the school record of 44 points set by Emma Young in 2016.

The Jaguars led for all but 3:53 of the game, but never by more than six points. The Colts led 2-0 just after the start of the game and 35-34 at the end of the third quarter.

Landversicht sank a 3-point shot in transition with 48 seconds remaining to break a 44-all tie, and she and Jermyra Christian combined to go 6 for 6 at the foul line in the final 28 seconds to stretch the Jaguars’ lead to 52-45.

Christian scored nine points for East, which had only three players in the scoring column.