Holiday tournaments behind them, East and West girls square off Friday 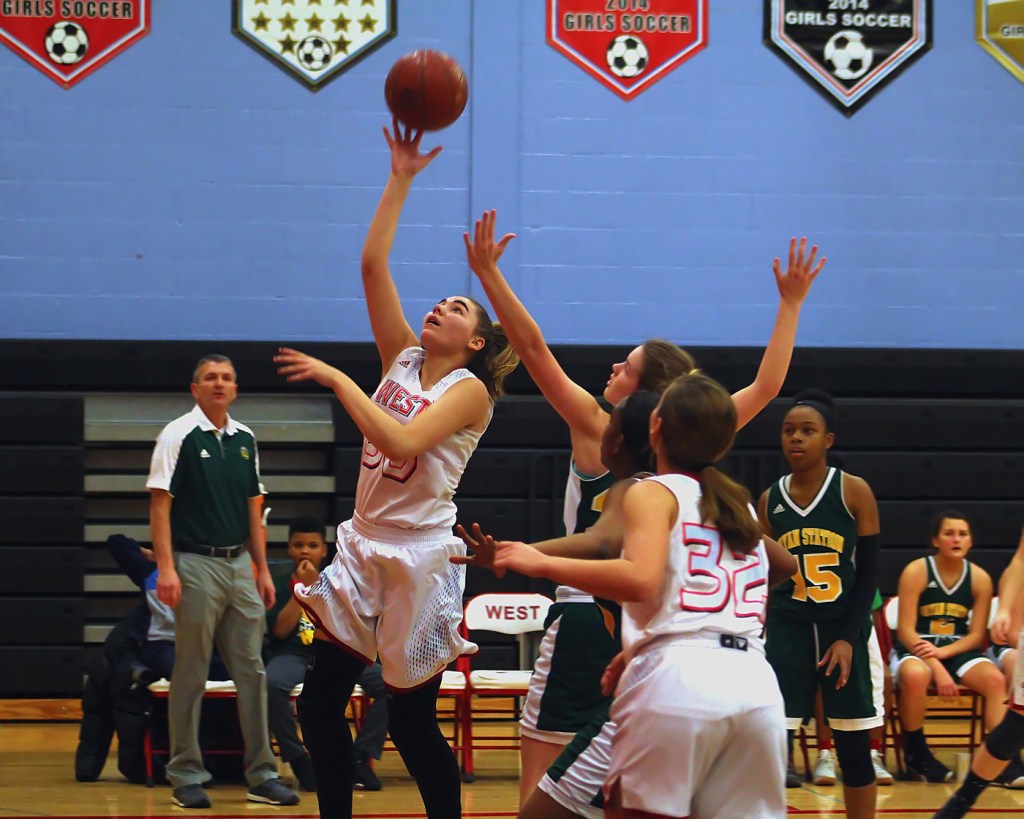 Coming off their holdiay breaks, the East and West Jessamine girls basketball teams square off for bragging rights and 46th District position when they meet at East Friday.

The East Jessamine girls team took part in the Berea Holiday Classic just before the New Year, earning a 3-1 record in the four games there. The Jaguars topped East Ridge, Collins and host Berea. They also fell to Lafayette.

In the tournament-opener for East, Jalynn Landversicht poured in 35 points to help the Jags earn a 74-70 win.  Jasmine Atkerson added 16 points.

Landversicht had 32 points in the second game, but it wasn’t enough as the Jags fell to Lafayette 74-54. East got back in the win column with a 58-41 win over Collins behind Landversicht’s 26 points and nine rebounds. Atkerson scored 13. In the finale for East, the Jags topped Berea, 52-20.  Jessica Hall led the way with 13 points.

West Jessamine hosted seven other teams in the Citizens National Bank Classic. The Colts won the first game by a slim margin, then lost the next two by a combined deficit of 48 points.

West started out the tournament on Dec. 27 by narrowly edging out the Moore Lady Mustangs 48-46, with Madlynn McDonald and Asia Montgomery combining for 35 points and 16 rebounds. Faith Osborne added nine points on 4-9 shooting, as well as five boards, with McKenzie Ivey scoring six points and five rebounds of her own. Moore came into the tournament with a 7-3 record.

Meanwhile, Bryan Station, who entered the tourney with a 4-5 record, narrowly took the win against Walton-Verona in their first game with a final score of 38-37.

It appeared at first the Colts would have trouble simply keeping the score close vs. Bryan Station, as the Defenders got off to a hot start, scoring 13 unanswered points to begin the game. A late first-quarter momentum change, spurred on by a series of turnovers by Bryan Station and a stronger presence under the basket for the Colts, brought the home team within five at the end of the quarter.

By halftime, West had drawn within four points of Bryan Station, then tied the score at 23 with 6:53 remaining in the third quarter on a McDonald three-pointer, and again on another one by Montgomery just 47 seconds later. From that point on, Bryan Station outscored West 21-10, overpowering the Colts on the boards and taking advantage of 27 turnovers.

McDonald again led the way with 18 points, while McKenzie Ivy scored 13, blocked three shots and pulled down seven boards of her own.

In his post-game comments after losing to the Defenders, West coach Chris Begley didn’t hide his frustration.

“Felt good going into halftime,” he said. “Thought we played hard, came back, but something wasn’t clicking. We had trouble at point guard; she struggled all night.

“We couldn’t guard anyone off the dribble, so we changed to a zone. Don’t like playing a zone. But after that first half, I felt like we were doing well.”

The second half would be a different story, as the Colts were repeatedly forced out of the paint on rebound attempts and second-chance shots.

“Turnovers killed us,” Begley said. “Seemed like the more physical they played, the less we liked it. I don’t think our girls played hard. I feel like our girls gave up tonight.”

On Day Three of the tournament, Harlan County dominated the Colts throughout the game, winning by a score of 74-46. McDonald led the Colts in scoring with 10 points, while Montgomery scored nine and both Osborne and Alleyse Steinkuhl scored eight each. Osborne returned to the lineup after missing the Bryan Station game, while Haylee Rutherford missed the tournament with a finger injury.

East and West square off Friday night. The game is part of a doubleheader. The girls are scheduled to start at 6 p.m. while the boys game is set to tip at 7:45 p.m.

The West girls come into the rivalry game sporting a 4-7 record and hot off an 84-40 pounding of Model Tuesday in Nicholasville. The East girls are 6-8 after dropping a 70-35 contest at Mercer County Monday.