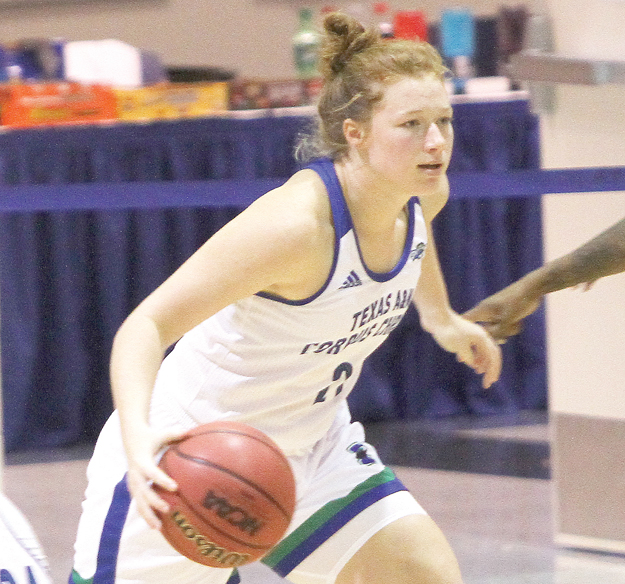 Early in the fall of 2016, former East Jessamine High basketball star Emma Young made a most difficult phone call from her newfound home of Texas A&M University-Corpus Christi to her mother Jacqueline, who was 1,200 miles away in Nicholasville.

To say Young was homesick hardly begins to describe the tone of the call.

“It was after my first conditioning day,” Young said via telephone recently from Corpus Christi, where she is a sophomore with the basketball Islanders. “I called my mom Jacqueline, and I was crying really badly because I didn’t know if I could make it.

“And she was like, ‘What are you talking about? And I said, ‘I can’t do this…it’s too hard.’ And all I heard was: ‘Your call has been hung up on.’ So I called her back, because the last thing I had said to her before she hung up was, ‘I want to come home.’ And she said, ‘If you ever say that to me again, don’t call me again. You’re not coming home. You better figure it out.”’

Young’s phone call did not come as a shock to Jacqueline, who coached Young throughout Emma’s standout high school basketball career at East Jessamine, where Young averaged 26 points, 12 rebounds, 3.2 assists and 2.2 steals per game as a senior.

“I knew Emma would have that moment,” said Jacqueline, who’s currently out of coaching after ‘retiring’ in 2016 from East, only to coach Nelson County last spring to the girls state tournament, before, again, retiring. “I actually thought it would come later, maybe midway through the fall semester, during that long stretch where you’re practicing against the same people every day, and school’s a little mundane because it’s not new anymore.”

Jacqueline also knew that  she would be the one Emma would confide in, more than her husband Chris – the boys’ coach at East Jessamine — or her teammates and coaches at Corpus Christi.

“If she’s going to have that moment of self doubt, it’s going to be with me,” Jacqueline said. “I don’t think she would ever let anybody else see that, because she’s just so tough that she finds a way. So I think, more than anything, she just needed to vent. She was a little overwhelmed and emotional at the time. I don’t know that she really meant it, though that’s certainly how she felt at the moment.”

“I remember that story, and it does not surprise me,” Chadwick said. “We tell our moms in recruitment — everybody goes through that at some point, you know? I don’t care if you’re going 15 miles down the road or you go 1,500 miles. At some point, you go, ‘Man, I might have made a mistake.’ And the answer when you call home is not, ‘Yeah, you did, come on home, baby.’ You tell ‘em, ‘No, you didn’t make a mistake, so go for it.”’

Young has not made such a phone call again, much to the joy of everyone involved.

Young appeared in all 32 Corpus Christi games as a freshman in 2016-17 — including 21 starts — averaging six points, three rebounds and 1.6 assists per game, all the while displaying the high octane motor on both ends of the court that was a hallmark of her style at East Jessamine.

It’s going even better for Young this season as a sophomore. She started the Islanders’ first nine games before suffering a slight achilles injury — averaging 31 minutes and 10.8 points per game, while shooting 48 percent from the field — including 44 percent from 3-point range.

Young also pulls down 4.2 rebounds and dishes out 2 assists each time out for a Corpus Christi team that got off to a 6-3 start and looks like a threat in the Southland Conference.

“My freshman year was really good,” said Young, who’s listed as 5-foot-10, but admits to being closer to 5-9. “I adjusted in the classroom really well — I have a 3.3 grade-point average now. On the court, it was harder because we had all these upper classmen who knew the system, and I had to learn a lot of things to adjust.”

Most youngsters will tell you that the speed of the college game is one of the biggest adjustments coming out of high school, but for Young it was the opposite. She was used to playing what she calls “100 miles per hour” at East Jessamine, and Chadwick wanted Young to slow just a tad and let the college game come to her.

“Coach Chadwick told me don’t turn the ball over and be patient,” Young said. “And I was always a 100-miles-per-hour player. He was more like, take that from 90 miles per hour to 60. I had to do that before I could play.”

“She plays so hard — her motor is so high strung — that a lot of times she’d just duck her head and run over somebody going to the rim because she was so determined to get there,” Chadwick said. “But people at this level will take a charge.

“At this level, you have to play with some finesse. She brought an awful lot of tenacity and toughness, but she didn’t bring much finesse at first. But she does now.”

Young suggested the lone drawback to her freshman season at Corpus Christi — and this also shouldn’t come as a surprise to anyone in the sport — is that she wore down later in the season.

“I had never played that long of a season, and I just wasn’t ready for that,” Young said. “By the end of the season, honestly, I was tired.

“But this year I’m a lot more mature. I’m putting up better numbers because coach Chadwick and (assistant) coach (Roxanne) White told me what to work on the offseason, and I made a big deal to do it.”

“Shooting,” Young said emphatically. “I shot pretty much 300 3-point shots a day. I wasn’t a bad shooter last year, but I wasn’t as good as I need to be.

“They also wanted me to get stronger, so I’ve worked on that, too. When I got here, I was 160 pounds, and my body fat was around 25, and now I’m 176 pounds and my body fat is 18. Honestly, it’s easy for me to gain weight, so the coaches made a big point that I needed to eat right and drink a lot of water, which I do.”

“She’s the toughest kid on our team, and she brings a mentally focused approach to the game,” Chadwick said. “She’s one of the hardest workers we have. She will do anything you ask her to do to get better. We play her inside, we play her outside … she’s one of the best players we have at taking charges, at playing post defense and at playing perimeter defense.

“She’s so versatile. We can find mismatches for her and take advantage of them. Emma can go out there (on the perimeter) and use her toughness to overcome the fact that she might not be the biggest forward in our league. From the perimeter, she can square up somebody that is a true power forward.”

If Young could point to a coming of age game here, it would be a Nov. 29 game against the University of Texas Rio Grande Valley. Young led her Islanders to a 71-41 win, contributing 21 points, seven rebounds and four assists.

She was chosen the Southland Conference Player of the Week for that effort.

“I just felt very comfortable and ready to go,” Young said. “And it wasn’t even how many points I scored, it was how well our team played. This team is probably my all-time favorite.

“I love my coaches, and I love my sophomore class. No. 1, they’re all really good players, and No. 2, they all work so hard. We all make an impact. And I love our seniors, too. They are amazing. Every one on our team is so good, and we all click.”

Young said she chose Texas A&M-Corpus Christi over North Florida out of high school in 2016.

“At first I wasn’t sure I could go so far away,” she admits. “I didn’t think I’d get to see my family as much, or my friends, who lived close. But most of the schools that recruited me were far away, so I thought, ‘Let’s try this out’. And part of me wanted to go far because I wanted to be more independent and be on my own and learn about myself.”

That took Young to Texas A&M Corpus Christi — on the south-central Texas coast, some 200 miles southwest of Houston.

Texas A&M-Corpus Christi is a school of some 12,000 undergraduate students in a city of some 325,000 people. Young says the city reminds her of Lexington, with Corpus Christi’s most obvious difference being the presence of the Gulf of Mexico, which lies across the street from her apartment.

“I was a little nervous about her going so far, for obvious reasons,” Jacqueline said. “But, at the same time, I knew this experience would help her grow up very quickly. And it has.”

Young couldn’t agree more. Her 3.3 GPA and tone on the phone back home are two signs of a healthy adjustment, but so is a recent decision to major in nursing.

“It’s a lot of work, but it’s going well so far,” Young said. “I knew I wanted to major in something that would let me be involved with people and help people. I’m actually very good at bio (biology) and other sciences, so I thought, ‘This is going to be OK. I can do this.”

Young said she would eventually like to come back and settle in Central Kentucky.