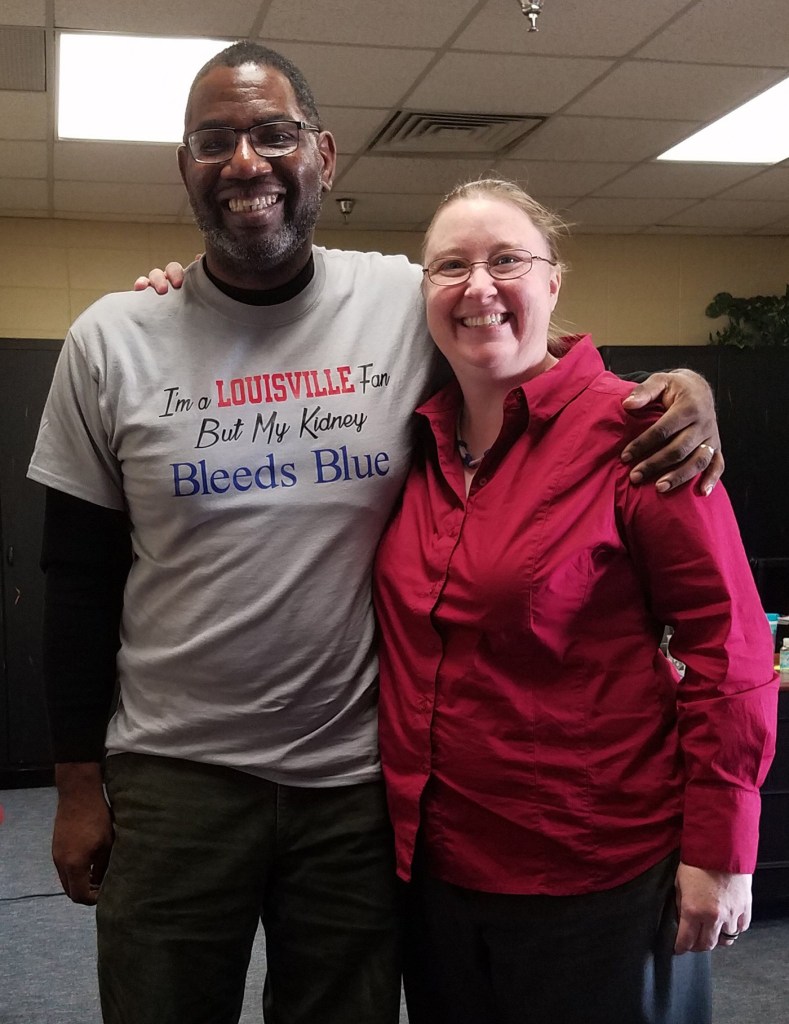 Ivan Graves, a custodian at West Jessamine High School, said Interim Principal Marci Smith gave him new life this year after she donated one of her kidneys to him, ending five years of dialysis.

Both graduates of WJHS, Graves said normally a white female is only a 6 percent match for an African-American male. Smith, however, was 90 percent a match to Graves. Smith said she was blessed to be able to do something that had been on her heart for almost a decade.

“To do it for someone I know is all the better,” Smith said. “Ten years ago, I saw a story about someone else donating a kidney and I just knew I was going to do that one day. I told closest friends and family, ‘I don’t know what to tell you other than one day I am going to donate a kidney.’ They were like, ‘Yeah sure, Marci.’”

Having also worked at JCTC as a custodian, Graves returned to WJHS telling his former colleague that, after four years on dialysis, he was in need of a kidney. He said he was shocked when she asked him to get the phone number and contact information so she could see if she was a match.

Graves finally believed Smith after much pestering, giving her all the information she needed. Smith then went through the process of figuring out if she was a match.

Coming to school one-day last year, Graves said he was told Smith was looking for him but before he could find her she came to him with good news.

“She said, ‘look at this text,”’ Graves said. “It said Marci was a match. God sent this and we can’t change that part. No man can change that.”

After two failed attempts at surgery, Smith said their third attempt was also in jeopardy of getting canceled. Two days before their third scheduled surgery, Smith was told her blood pressure was too high and, unless it came down, surgery 48 hours later was not an option.

“It was high because I was scared that through the tests we were not going to be able to do it,” Smith said. “I told him I swear we are going to do this, but I don’t know if it will happen.”

Graves had another thought, believing God has a season for everyone, and this was theirs.

The surgery went forward as planned, and Graves said he now has a kidney that “bleeds blue” even though he is a Louisville fan.

“He now at least has a kidney that bleeds UK goodness,” Smith said. “That is why he is healing so fast.”

Since the surgery, Graves has had no transfusions, no blood clots and no infections.

“I feel like a brand new person,” Graves said. “I know this was out of the love of her heart and God’s blessings.”

An only child, Smith said she is happy to welcome Graves into her family since the surgery. After losing his sister earlier this year, Graves agrees, saying that because of Smith, he still has one left.

Spending time together over the holidays, both agree God has been good to them this year as Smith followed through on a 10-year thought and Graves was given a second chance at life through her donation.

“Everybody says how healthy I look,” Graves said. “I feel like I am a brand new man. Five years on dialysis with your body breaking down, your body is not meant for that. Now I can travel and go places and live a normal life. Everyone has reached out and showed so much love. Marci and her kindness, everyone that gets to meet her gets to meet someone that is God-sent. She gave me a part of her life so that I can live a longer life. Having money doesn’t mean anything when your health is gone.”