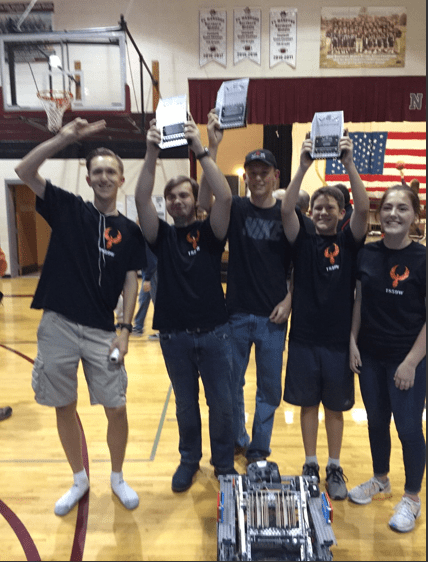 Competing against teams in other counties such as Rockcastle and Pulaski, the VEX Robotics team at JCTC has succeeded in winning skill awards, judges award, design awards and excellence awards in various competitions.

Composed of seven teams ranging from three to six members, individual teams collaborate and compete against each other working on their own design builds through computer programming to bring to state and world competitions throughout the year.

“JCTC VEX Robotics is the only competitive robotics program within Jessamine County Schools,” said Meghan Banks, mathematics and per-engineering teacher at JCTC. “Students in eighth through 12th grade who are involved in our engineering career pathway at JCTC are invited to participate in our VEX program. However, many of our elementary schools have access to VEX IQ materials and implement some form of a robotics program. Also, our middle schools offer courses in coding or VEX Robotics.”

VEX Robotics, she said, allows students the opportunities to collaborate, communicate, create and construct as they learn computer programing.

“Next semester, we will participate in at least two more competitions prior to the state competition in March,” Banks said. “So far, four of our seven teams are qualified for state. Our most successful competition has been our own because not only did we have a team win Tournament Champion, but we were able to host over 40 teams at East Jessamine Middle School.”

Several teams, Banks said, have proven themselves tough competition with great designs and strong skill sets. Although, Banks said the team giving JCTC’s VEX Robotic team a run for its money is the Early College and Career Center in Elizabethtown that includes teams from Hardin County.

“We deem them our biggest competitor, yet most valued alliance partner,” Banks said.

Although in its first year with JCTC’s eighth-grade team involvement, many members as well as coaches have participated since its debut. Andrea O’Bryan and Greg Camenisch introduced the program three years ago.

Camenisch and Meghan Banks, both engineering teachers at JCTC, currently facilitate the program. O’Bryan is still involved and assists the program now as Booster Club President. Banks said students who participate in the program have an opportunity to benefit themselves by their own level of commitment and involvement. Jokingly, Banks suggests teams are currently working on top secret information.

“Currently, teams are either revising and improving upon their original designs or are completely rebuilding their bots in order to prepare for next semester’s competitions,” she said.

Several local businesses, Banks said, have contributed to the VEX Robotics team success in competitions such as Pecco, Blue Tank and Pump Rental, Banks Engineering, Studio B2 Photography and SGM Excavating and Paving.

“Having local sponsors is very important to our VEX teams because not only does it allow our students more opportunities with the extra financial support, but it also provides a layer of moral support for the kids,” Banks said.

“The students recognize that our sponsors are contributing to their success. We greatly appreciate local businesses who place a vested interest in our students and programs like VEX because it continues to strengthen the relationship between Jessamine County Schools and our community making Jessamine County a great place to be.”