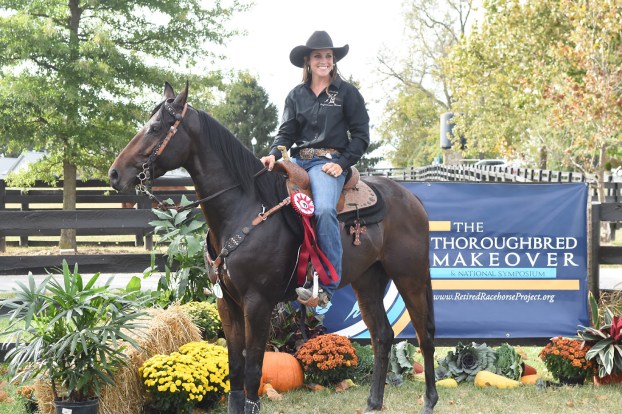 It was through hard work and dedication that Wilmore resident Kelly Murphy said she won National Horse Trainer of the Year.

Growing up in what she calls a man’s world, Murphy said she started competing when she was eight-years-old and said she was the only one she knew of in Jessamine County that was into rodeo.

“I was at a county fair and watched rodeo,” said Murphy. “I had friends that had horses and I would ride with them. We would go trail riding, but all I wanted to do was go fast. Everything around here is thoroughbreds and race horses. Rodeo is kind of weird to everyone. A foreign thing.”

When Murphy was in high school she was the only student from her school to join a team which  encompassed the whole state of Kentucky. She traveled on the weekends with her mother, while her dad would stay home and work. Her teachers, she said, were always good to send her any work she may have missed while on the road.

“I’m thankful for that,” said Murphy. “I wouldn’t be where I am today if it wasn’t for those people supporting me and letting me go do that kind of stuff. I know that it is hard to try and do that kind of thing now.”

As a trainer, Murphy said it is her job to take a horse and start them under saddle and get them riding so they have a good foundation for anything. Murphy said she then goes from breaking them to training them and has worked with both barrel horses and race horses over the years.

“I am a woman and a lot of the time people bring me horses that are a little tougher, a little bigger, a little pushy and they might buck a little,” Murphy said.

“They look at me and are like, ‘I just don’t know.’ I say, ‘let me do my job and come back and see me in a month and I will show you.’ It is a man’s world. It really is and it is tough. I guess it took me a long time to not let it bother me but I am very confident in my work and I love what I do.”

Murphy said the only thing she could do was to let her actions speak louder than words.

“You can only say so much,” Murphy said. “Until people actual see you ride or see you compete.”

Murphy also spends her time working with young women and coaching the University of Kentucky Rodeo Team. However, she said it was her work on the Retired Race Horse Project which got her nominated to win National Horse Trainer of the Year.

“I sent in my application in December and got accepted in January when I was nine months pregnant,” Murphy said. “I had my son on Jan. 12 and was riding two weeks later.”

The Retired Race Horse Project has been around since 2010 and exists to take ex-racehorses and work to place them in a second career such as equestrian sports or serving farms, trainers or other organizations.

“I took a race horse who was running and now he is a barrel horse sitting and turning like a quarter horse,” Murphy said. “It is just something that most people are not used to. It is a strange thing to see. I think that it is really starting to open peoples eyes that thoroughbreds can be used for something different. The Retired Race Horse Project gives them another purpose. It is a great program.”

This spring, Murphy said she will finally be able to start working with the first horse which was born on her farm. This realizes a dream she said she has had her whole career and said her goal is to be able to train and compete with her own horses.

Through a lot of years, and much dedication, Murphy said having a backbone is what got her this far. Being the odd ball, she said she never went out and did activities that her other friends were into growing up, but she wouldn’t change that for anything.

“I was always working, always riding,” Murphy said. “I wouldn’t change it for a million dollars. I am doing what I love and I have what is important to me. I did not think that I was going to be a horse trainer. You never know where life is going to take you. Work hard in silence, let success be your noise.”

For more information on Kelly Murphy and the services she offers please visit www.strikingkmaperformancehorses.com, or call 859-797-4368.