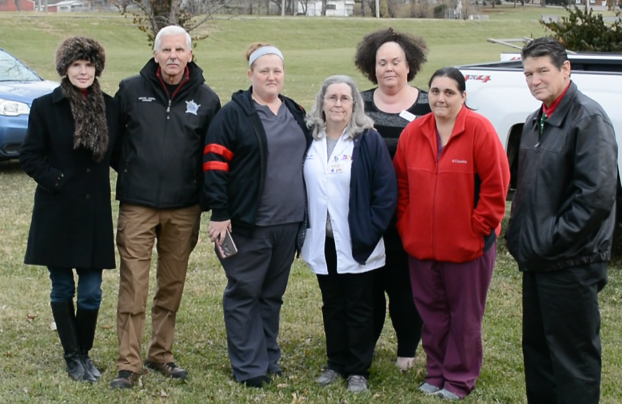 Group comes together to give homeless man proper burial

Most knew him simply as Mr. Ross but, thanks to a group of caring Jessamine County residents, the indigent man received what many in his situation do not: a proper burial.

After passing away at the local Diversicare in Nicholasville, the deceased’s next of kin could not be reached. That is when a group stepped up to give this man what they say everyone deserve.

“They couldn’t reach anyone else and no funeral home arrangements had been made,” Coroner Michael Hughes said. “Homeless are not normally given a casket. They are placed in a body bag and dropped into a metal vault and buried. The Judge-Executive David West donated a casket to bury him in and we had a little grave site service for him. We are willing to do more than we have to in order to give someone a proper burial.”

Hughes said when the indigent man passed away he was contacted from someone at Diversicare in at 2:30 in the morning, and agreed to help the facility out. After taking some notes and talking to the people on staff, he took the deceased’s body to his facility where he stored it for a week while arrangements were attempted to be made.

“We do everything we can to find next of kin,” Hughes said. “Some Diversicare staff came down to be there when he was buried. He became close to these folks. It shows that someone does care. We do not just roll them over in a hole.”

Janet Powers, who works for Diversicare, said the facility accepted the man from the University of Kentucky Hospital. He was admitted to  Diversicare with no family contacts.

Powers said the gentleman ended up passing away and a distant relative that was eventually reached refused to claim the body.

“West went above and beyond and showed an exceptional humanitarian act with providing Mr. Ross a proper burial and said some nice words,” Powers said. “It is nice to know that there are people that are still willing to help people because every body, no matter what, deserves to have a final resting place and have it in humanitarian type fashion. West made sure that happened for this gentlemen and without him I don’t know what would have happened.”

West said that, although the current provisions call for a body bag, he would rather donate a casket and preserve what he sees as human dignity.

“It’s a small price to pay,” West said. “I think it is the decent thing to do. Every life that is lived deserves decency, dignity and respect.”