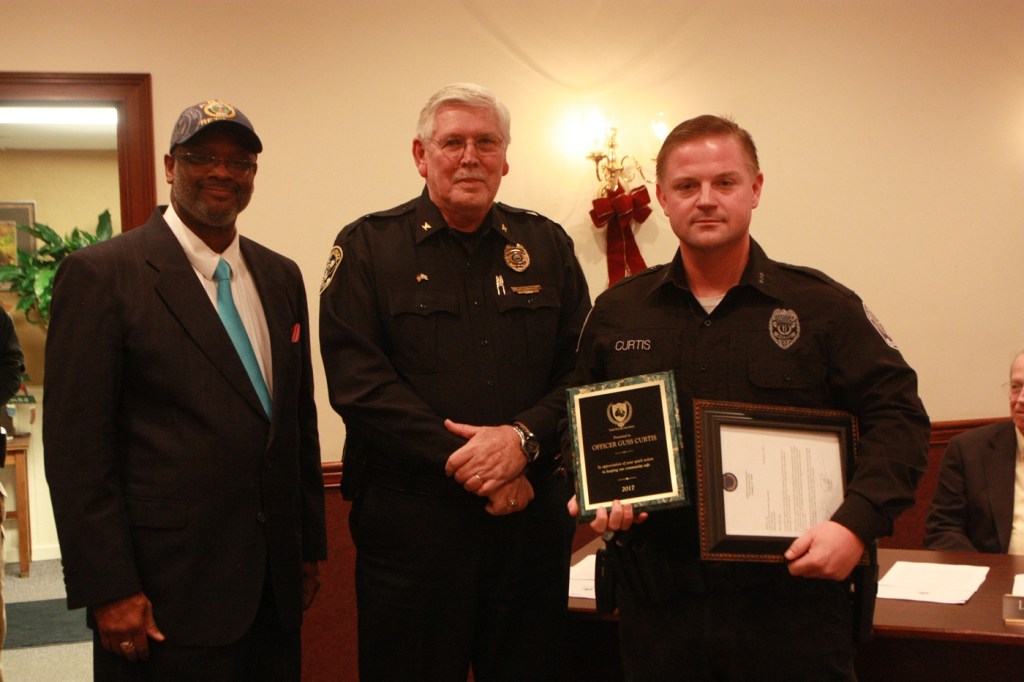 For Wilmore police officer Guss Curtis, what is now being called an act of heroism was simply him doing his job — even if he was off duty.

Curtis, who has been an officer with the Wilmore Police Department since July after coming from Georgetown, was recognized Monday night at the Wilmore City Council meeting for intervening in an altercation at a Lexington-area restaurant while he was off duty late last month.

Curtis said that, in his opinion, he was only looking out for the community and their safety.

“I was leaving Legends Youth Boxing Gym and was going to Subway two doors down,” Curtis said. “I was in line and there was a family sitting in the corner, a man and a woman with a newborn. A guy outside I observed walking by stops, turns and looks in the window with a real aggressive face. It grabbed my attention so I kept an eye out walking to my car. I knew it was out of the ordinary.”

Curtis said when the family walked out of the building the gentlemen he had been observing took off in a full sprint with his fists clinched towards the couple.

“I figured I had to do something,” Curtis said. “I can’t just sit here.”

Pulling out of his parking spot, and jumping out of his car, Curtis said that he proceeded to give commands for the man to back away from the family. Being out of his jurisdiction in Lexington, there was very little that he could do in the situation and he had left his cell phone in his police cruiser, making him unable to telephone the Lexington Police Department for backup.

“I told him to just get out of here, no one wants to be bothered by you,” Curtis said. “I explained I was an off-duty police officer and I would defend myself. He took a few steps over and saw that my cruiser said police on it and took off.”

Curtis said he believed the man suffered from a mental disability, as well as substance abuse. As far as receiving an award, the officer said he was just fulfilling what he promised to do when he became a police officer.

“I am thankful for it,” Curtis said. “This is just something that six years ago, when I took the oath, in my opinion I felt like I was doing a good dead for the community and keeping them safe. I really appreciate it.”

William “Sarge” Farris, the director of the Legends Youth Boxing Club, said Curtis has volunteered there for the past three or four months helping at-risk youth avoid traveling down a path of self destruction. He said Curtis’ act demonstrates the type of individual he is and his commitment to serve and protect.

“He is genuinely concerned with the youth in our community,” Farris said. “He is one of the few men that I know that doesn’t just walk the walk. He is a visionary, a go-getter, a mover and a shaker. He goes way beyond the call of duty and it brings great reflection on himself, the community of Wilmore and the police department in which he serves.”