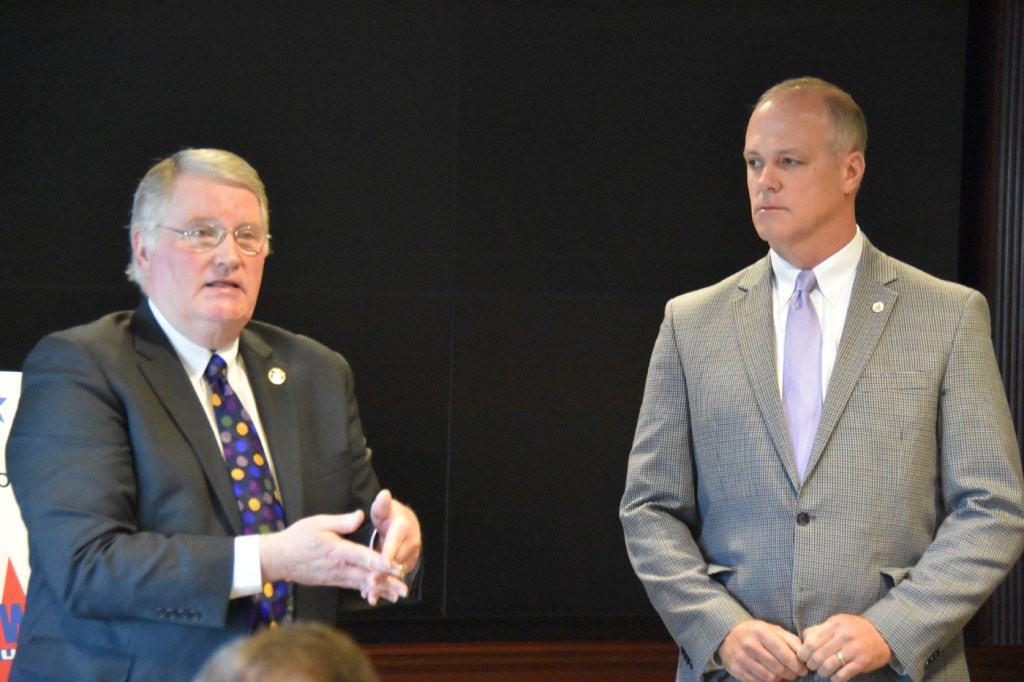 Talk of the ongoing search for an answer to the state employee pension woes was the chief topic when Sen. Tom Buford of the Senate’s District 22 and Rep. Russ Meyer of House District 39 took center stage at last week’s Chamber of Commerce Rooster Booster.

The warm-up act for Buford and Meyer was Jessamine County Judge/Executive David West, who spoke on the importance of networking at events such as the Rooster Booster.

West talked about how a personal connection formed with former Woodford County Economic Development Director Craig McAnelly at a meeting in New Orleans and a golf game 12 years ago have led to a cooperative that landed the new 84-acre industrial park and saving a $384,000 machine grant for Albaad that was nearly lost.

Meyer said the state’s legislature may be looking at a special session to decide on the pension reform issue. He said the governer’s proposal has come out but has now been shelved. Another version is expected to be released soon. Buford said the Senate may have had the votes to pass the bill by about 23 votes out of 38, but the House did not and still does not have the votes, so changes will have to be presented.

Buford said the problem with the original bill was that it was not inclusive to all parties and had some elements that were arguably unconstitutional.

“There are folks who were favorable of the bill and folks who were unfavorable, but I think we have to bring some folks to the table to have a good understanding of this.”

He said that work on the bill, as well as other key issues, was sidetracked by the sexual scandal in the House.

“They [the House] are kind of sailing the ship with the anchor down right now,” Buford explained. “It’s difficult to do without a speaker. This thing is rampant, and it’s terrible. It has caused issues with the pension issue.”

Of the pension system itself, Buford said that information he had stated that there were 544,000 people in the system as of June 2016. One of the state’s biggest problem is the low number of workers in state and local government jobs to support workers that are now retired. Another problem is that social security was not intended to be a sole source of income, but rather simply “to survive on.”

Buford segued his speech to the Federal Reserve rate and getting the nation’s debt under control. He said that, in order to do so, programs would have to start being discontinued.

Meyer added that though a common charge is that the state has “kicked the can down the road” when it comes to the pension situation, the truth is that some reform measures were taken about 10 years ago. The issue is simply so large and encompassing that it will take a lot of time and a lot of work to correct.

“This problem has been a bipartisan effort of everybody in Frankfort,” Meyer said.

Talk turned to the effect that the rising cost of health insurance has on pensions. Buford said the nation is one executive order away from removing the government mandate on health insurance, which would effectively end the Affordable Care Act. He said, for Kentucky, the legislation has essentially been an expansion of Medicaid.

“So it’s good that they are getting healthcare, but difficult for the budget,” he said of those who enrolled in the Affordable Care Act program. “Even though Kentucky pays a small percentage of that, we are probably going to have to start paying eight or nine or 10 percent of that pretty soon. Right now, that is eating our lunch.”

Buford said the state had to find a way to make Medicaid reasonable and rational, as opposed to the cost that it is at this time due to the effects of the Affordable Care Act.

Other topics touched on at the Rooster Booster event were the eastern bypass, which was bid a few weeks ago, and the development of the Brannon Road project north of Nicholasville.