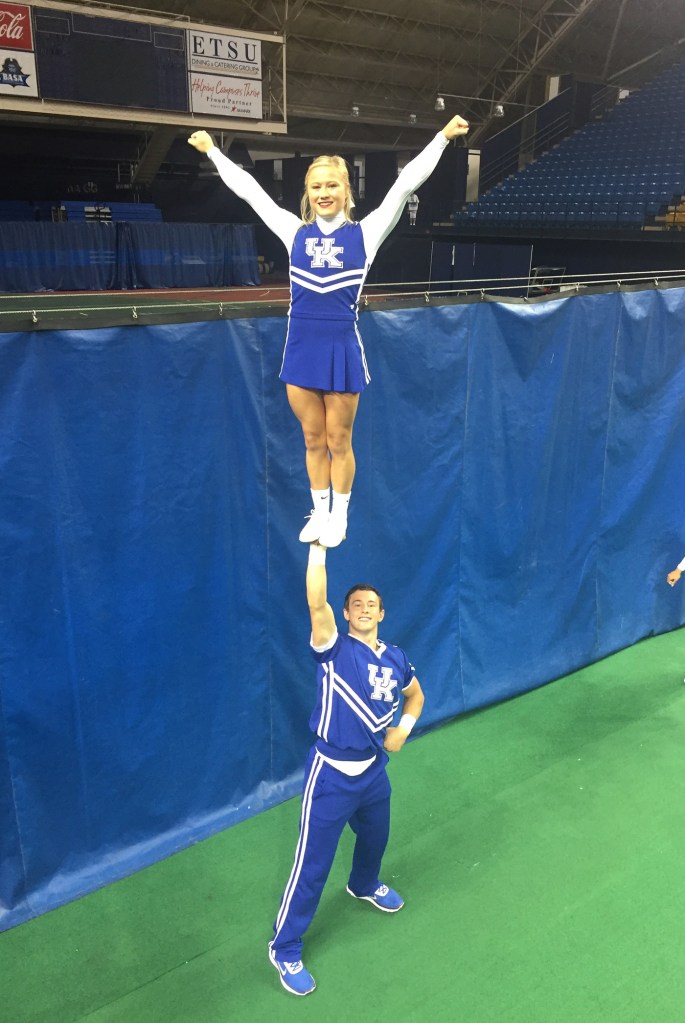 East Jessamine graduate Spencer Madden has been a University of Kentucky cheerleader since his freshman year and will be accompanying the cheer team this February to perform at the 2018 Olympic games in Peyeongchang, South Korea.

USA Cheer has chosen UK to represent the United States at the Olympic games in performances at award ceremonies, Olympic venues, street parades, closing ceremonies and a cheerleading championship with six other countries from around the world.

Madden grew up in Jessamine County and said he joined the cheer team at East Jessamine High School his junior year after focusing on mainly basketball and football at the local junior high.

“I played sports for parks and recreation all growing up,” Madden said. “Baseball, basketball, football. In middle school I stuck to basically basketball and football. I had a ton of friends that were females that were on the cheer team throughout my whole life. A couple of guys joined, and they brought some friends. Then some of my best friends were on the team so I thought, ‘why not give it a shot.’”

Madden said he came to a practice and ended up having a lot of fun. At the end of the practice, he was approached by the coach who asked him if he wanted to join the team. Explaining that he was not sure, the coach said they needed an answer then because they were putting him in the routine for their Friday game.

In his senior year in high school Madden said he attended a UK cheer clinic. He was invited to try out for the team in May and said he worked hard for a full month to get ready to make the team, although he admits he was not very prepared.

“They saw a lot of potential and gave me a shot,” Madden said. “I was the last person chosen.”

Madden said that trying out to become a UK cheerleader was an amazing experience. Personally having to be invited to try out for the team, he said the process took three days consisting of morning and evening cuts.

“That was my first experience in front of a crowd that was reactive,” Madden said. “Everyone in the stands wants their kids to succeed, but they were there also supporting everyone else’s kids.”

Madden said he is very excited for February when he and his team will travel to South Korea for the Olympic games. Eighteen athletes, the team’s head coach and two coaches from Team USA will make the trip, he said, as well as the team’s athletic trainer.

Madden explains that he believes UK cheer was selected to represent the United States at the Olympic games for several reasons.

“We have been so successful,” Madden said. “We are 22 times national champions. We do a good job representing the university. I think they thought we were the best fit for the given time and what they could make happen.”

Madden explained that the cheer team will change up their routine slightly for the Olympic games. He also said that Team USA coaches will work with them to incorporate the vision that they want to see happen in the Olympics as well.

As for his future, Madden said that, although he is majoring in accounting, he is getting into coaching as well.

“I work here in Jessamine County at Off Main,” he said. “I really like it. I like working with kids, helping them get new skills and seeing how happy it makes them. It would be hard to start a career as an accountant and open a cheer gym. Maybe something I do recreationally. I could see myself doing that.”

Madden’s mother, Dana Reed, is excited and proud of her son and his hard work.

“The UK cheer squad is impressive and spirited. I have confidence they will do an excellent job representing the USA,” Reed said. “It’s amazing to have a child be a part of that experience. This is an incredible opportunity for Spencer. He makes us all proud. It takes a community of teachers and coaches to help parents shape their child. It’s exciting to see all of his hard work, sacrifices and dedication come to fruition.”