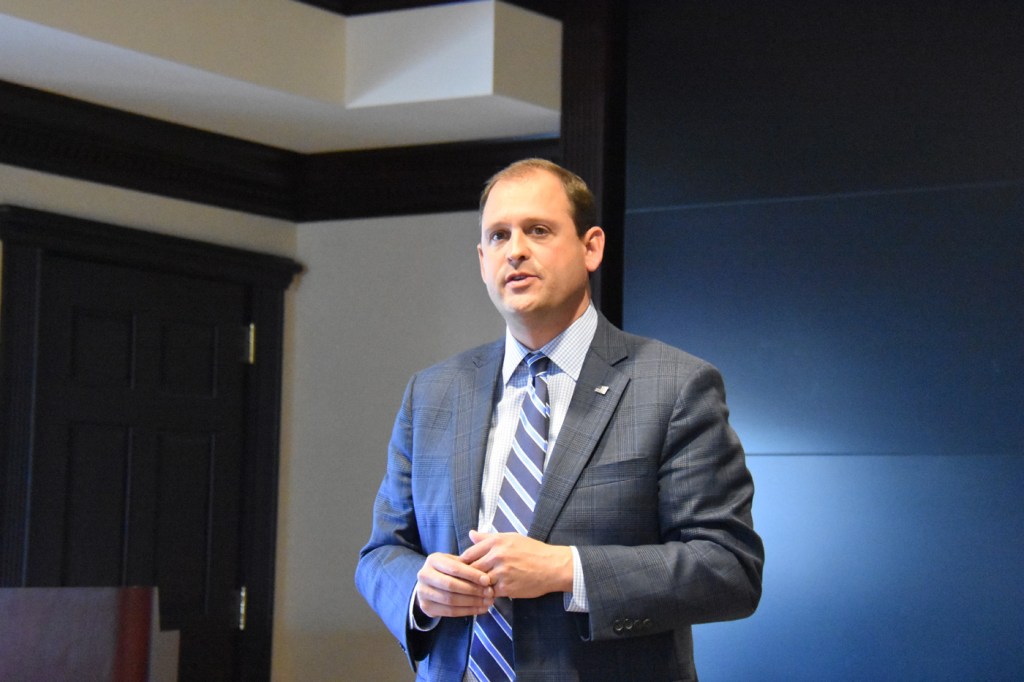 Rep. Andy Barr, Representative of Kentucky’s Sixth Congressional District, was the guest speaker at Monday’s meeting of the Nicholasville Rotary Club. Barr’s talk centered around the issues with North Korea and Russia, tax reform in the country and the efforts to have Camp Nelson designated as a national monument.

Just as he had discussed at a recent Rooster Booster event in Nicholasville, Barr explained his role and responsibility as the chair of the new Monetary Policy and Trade subcommittee. He said that the first jurisdiction of the subcommittee is oversight of the country’s Federal Reserve system. He said that they have a reform agenda, and three bills had been passed in the last week to help make the Fed more transparent, accountable and predictable.

The second jurisdiction of the Monetary Policy and Trade subcommittee is sanctions. Barr said that the subcommittee has direct oversight of the treasury, and its implementation and enforcement of international sanctions.

“This is where we use the economic levers in our country to achieve our diplomatic and national security objectives,” Barr said. “It is vitally important that we achieve our objective and protect the American people. One way that we can do that without conflict is by ratcheting up economic pressure.”

Barr said that the U.S. has not in the past used its economic power to great effect, and used the current issue with North Korea as an example. He said that the failed policy of ‘strategic patience’ created a country that was a global threat with nuclear powered capabilities. He explained how economic strategies can be used with other countries who conduct business with both the United States and North Korea to influence actions by North Korea itself.

“Earlier last month, we passed the toughest economic sanctions ever against North Korea,” Barr said. “It was a total bipartisan bill that I authored that passed out of the subcommittee with a unanimous vote and passed out of the U.S. House with only two dissenting U.S. votes total.” The bill, which was named after Otto Warmbier — an American tourist who died following an extended detainment in North Korea — says to the country that it can no longer engage in nuclear weapons with impunity. This bill, along with secondary sanctions against Chinese and Russian banks will help hinder the prosperity of North Korea’s weapons program in a diplomatic manner.

Turning the focus to domestic issues, Barr discussed tax reform efforts currently underway in the nation. He said that he is happy to have the opportunity to make changes that haven’t been made in a generation.

According to Barr, the current tax code has an abundance of loopholes and giveaways for the wealthy and well-connected that need to be corrected. In addition, he said that American families collectively spend over $99 billion each year trying to comply to the broken code. Businesses spend $147 billion on compliance, which diminishes productivity.

Barr talked about how despite trends in job growth, several factors were still contributing to a weakened economy, such as weak labor participation in the work force.

“Productivity is low,” Barr explained. “That’s one of the indicators of softness in the economy is low productivity growth. We need to get that labor participation up so that we can achieve that lift in economic growth and give people more opportunities.”

He said that in restructuring the tax code, the goal on the family side was fairness and simplicity, whereas the goal on the business side was more competition and job creation. The current bill, he said, would result in a large tax cut for the country’s middle class by reducing the number of tax brackets from eight to five, with the lowest being a zero percent rate. The standard deduction is also doubled, meaning that 90 percent of American families will be able to file their taxes on a “simple postcard-style form.”

“That’s a big deal,” Barr said. “Think about it: none of the procrastinating, none of the TurboTax, none of the H&R Block, none of the spending thousands of dollars on an accountant because most Americans are making less than $90,000 a year.”

“Every tax bracket gets a benefit, even losing itemized deductions and even losing state and local tax deduction,” he said. He said that for Kentucky, a bipartisan analysis of the bill showed that it would result in nearly 12,000 new full-time jobs created and the average median household income family saving over $1,700 per year on overall tax liability.

Barr also updated the Rotary club members on the effort to have Jessamine County’s Camp Nelson designated as a national monument. Barr said that the designation is currently on the president’s desk, and he hopes for an announcement soon.

Other topics that Rep. Barr discussed at the meeting included the efforts to repeal that National Health Care Act, President Trump’s declaration of the opioid epidemic as a National Public Health Disaster and actions being taken to help curb the addiction issues, America’s relationship with Russia and the status of the country’s care for veterans and Department of Veterans Affairs centers.

Nicholasville’s Rotary Club meets each Monday at noon on the second floor Central Bank on Main Street in Nicholasville.