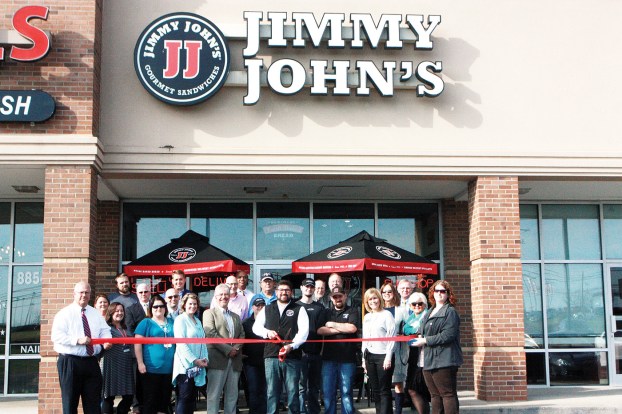 Jimmy John’s in Nicholasville opened its doors five years ago and celebrated yesterday with a better-late -than-never ribbon cutting.

Owner Jacob Glancy said he opened the doors in 2012, although he was so busy with two jobs and two children that he didn’t get around to having a formal ceremony. When he reached out to the Jessamine Chamber of Commerce recently, Glancy was told it is never too late.

“My first business in Nicholasville is Jake’s Cigar Bar and Lounge,” Glancy said. “We had that going about two or three years and wanted to expand that, but then I was worried about state-wide smoking bans, so I figured I needed to do something else.”

Glancy, who lives in Lexington, said he has a culinary background and, at that time, began looking at Jimmy John’s franchises. He made the decision to open up a shop in Jessamine County in order to be close to both businesses in case he needed to run back and forth.

“We are supporting him in this great endeavor,” said Chamber of Commerce Director Ronda May. “Even though it is five years old. He is definitely an invested person in Jessamine County, so we are really excited to have him.”

Glancy said that five years into business the community has been great. They see a lot of traffic, receive a lot of business from  Bypass 27, as well as shopping traffic from other businesses located around them.

“We really appreciate the community’s help, and we try and do our part,” Glancy said. “I love the county. The people are great in Nicholasville. They are really hometown people.”