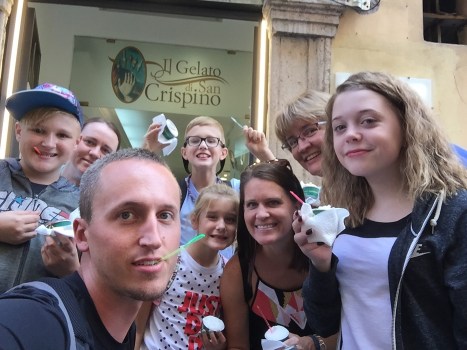 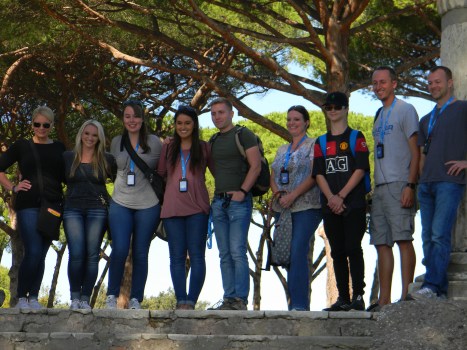 Over mid-October’s Fall Break, over five dozen Jessamine County students, parents and teachers took a group tour to Rome, Italy. East Jessamine middle school teachers Jason Sharp and Jacob Kraschnewski, group leaders on the trip, and three of the students were happy to talk about the adventure once home long enough for the Italian accents to subside.

Though the plane left in October, planning for the educational adventure began a year ago when East Jessamine Middle School teacher Jacob Kraschnewski decided that he wanted to take students to Rome, and worked with Education First — an international company that assists with and facilitates educational travel — to begin the process.

“It was on my list of things to do here,” Kraschnewski explained. “At that time it was my sixth year of teaching, and I was like ‘well, where do I go from here?’ I wanted to take kids on a trip to see the Eternal City. Me and my wife travel quite a bit, and that was a trip that I just really loved.”

Kraschnewski said that he worked with social studies teachers at the school, and developed a list of students who be interested in taking the trip and would benefit from the experience. An informational meeting last October packed the library, he said, and yielded many names immediately on the sign-up list for the trip.

“It was overwhelming to see how fast people signed up and how many,” Kraschnewski said. “I was thinking like 10 or 12 people when I first had this idea, but we ended up having 62 travelers.” Of those 62, eight were teachers, about 20 were parents and adults, and the remainder was students. Several in the group had never flown before, and many were exiting this country for the first time. One had to return home before leaving the country due to illness.

“Our school has a few sponsored trips that we take, but it doesn’t have any opportunities for foreign travel,” Jason Sharp explained. “So we decided that we would step away and set this up together and see how it goes.” He explained that each student was in charge of their own fundraising to pay for their own trip. The trip was not sponsored or funded by any one school group.

“We were able to manage it on our own with just our tour consultant from EF and us working it out together,” Sharp said.

Much of the itinerary and planning work for the travelers once they landed in Rome was handled by EF, though Kraschnewski said he was able to add in some tweaks and extras, such as a trip to Florence that part of the group embarked on.

The trip to Rome began at Bluegrass Airport in Lexington, and one flight connected in Atlanta, Ga. while the other in Charlotte, N.C. before two planes —one with 41 members of the group and the other with the rest — delivered everyone to Rome. After about nine hours of travel, the flights landed roughly an hour apart in Italy.

Upon landing, the sightseeing began with a stop at the Trevi Fountain on the first day. The second day of the trip included stops at the Colosseum, the Pantheon and the Roman Forum. On Wednesday, the troupe visited the Vatican and the Sistine Chapel — sights that the students agreed were beautiful to experience, and even better thanks Franco, the best tour guide in the game by their account.

“The Sistine Chapel was breathtaking — astonishing,” student Jackson Gross said of iconic site. “The different collaborative artworks that went into it…it was inspiring to say the least.”

Also that day, everyone visited the massive underground burial site, the Catacombs, which was a stop Kraschnewski said he added to the itinerary as he had never been. The group learned about how the burying process took place, and how different classes were labeled. The solemn experience featured a tour guide who repeatedly warned against anyone breaking from the group and getting lost.

“For a lot of our tours, we had what they call ‘whispers’, which are little machines that hung around our necks with earpieces so that our tour guide could talk to us no matter where we were,” Kraschnewski explained. However, being so low beneath the ground in the Catacombs made the devices cut out, making for a memorable stop on the trip.

On Friday, half of the group took a four-hour bus ride to Florence, and saw sites such as the Duomo, the replica of David and the leather factory. The other half remained in Rome for a shopping adventure, as well as a visit to The Chains of St. Peter. There was an allegation about the group misreading a map and getting lost for a short time, but the parties present would not confirm nor deny the charge. It was confirmed, however, that the shopping took place without issue.

Saturday saw the entire group visit the ancient port city of Ostia Antica, and some signed up for a cooking class making fettuccine, lasagna and tiramisu, the latter of which became a popular nightly dessert.

Sunday morning brought with it a 5:30 a.m. wake up call to prepare for departure. Sharp said that even though everyone had to go through the strict customs once back on American soil, the return trip was smooth and uneventful.

“Needless to say, most of our kids had never traveled outside of the U.S. and come back, so customs was a new experience as well,” Kraschnewski said. “Overprepared was how we wanted them to travel, and not scared or anything. They were marvelous in airports, always staying together and keeping an eye out for each other. All the way there and back, they were very responsible.”

He said that everyone learned about how to travel and how not to travel, such as sitting bags down unattended, or attended by someone else. Lessons that will serve everyone — particularly the students — well in their futures.

The students all agreed that the trip was a great experience that was both fun and educational. They were pleasantly surprised by the amount of English that was spoken.

“I’m very interested in ancient history and architecture, so I really enjoyed the Colosseum,” Gross said. “And I really enjoyed learning the symbolism of the arch. It was very enjoyable for me.”

For Sharp, the highlight was seeing the students and parents with little traveling under their belts experience another country for the week. He liked seeing their confidence grow as they saw that they could make such trips on their own and being comfortable.

Kraschnewski enjoyed watching the tour guides and seeing them teach the visitors to their country. He was pleased with the trip, and the educational opportunities offered by traveling.

“As far as education, that [how to travel] is a life skill,” he said of the traveling experience. “And with all that ancient history stuff on top of it, I thought it was amazing.”