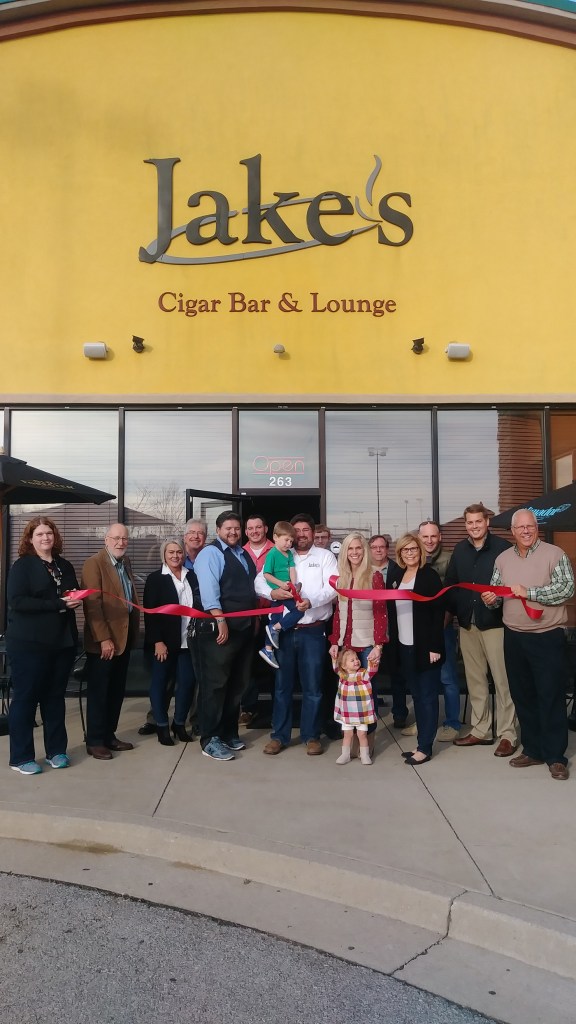 For the owner of Jake’s Cigar Bar and Lounge, a ribbon-cutting ceremony means something different than it does to other entrepreneurs.

Jake Glancy, his wife Autumn, and General Manager Jeremy Kendrick have worked hard over the last seven years to make their business a success, and it’s paid off. Located in Brannon Crossing, Jake’s draws customers who are looking for a place to relax; it keeps those customers by providing just that, along with a large selection of bourbon and cigars — the largest in the area.

“This is a hybrid. Most places are either a bar and only have 4 or 5 options for cigars, or they have a big walk-in humidor and they don’t have a bar. I wanted both, because there was nothing in this area that serviced both of those,” Glancy says.

The shop’s large walk-in humidor is temperature controlled at 70 degrees with 70 percent humidity to ensure that Jake’s cigar selection is kept fresh. Dozens of brands sit in neat rows, including everything from a high-end Pappy Van Winkle version to more affordable items. Flavored cigars are quite popular right now, and Jake stocks a little bit of everything to keep his customers happy — including a pumpkin spice version.

“These are pretty popular, the white chocolate truffle and Irish cream. These have just taken off,” Glancy says, gesturing to the flavored section.

Outside the humidor, a well-stocked bar gleams beneath soft lighting. Plush leather seating areas are situated all around the shop, and one corner holds arcade games, a large-screen television, and a stack of video games for those who want to kick back and make themselves at home.

On UK game days, the shop does booming business, and because it’s located in a busy shopping center it has the potential for foot traffic as well. Add to that the fact that the Glancys also own the Nicholasville Jimmy John’s store, and you can see why they’re only just getting around to the ribbon-cutting ceremony.

That’s perfectly okay with Jake, who says it’s just a celebration of the shop’s success. Besides, even at seven years after the opening, it couldn’t have come at a better time, according to Glancy.

“We were always so busy, always had stuff to do, and then a year later I opened Jimmy John’s and … we never had time,” Glancy says. “But seven is my lucky number. … We actually have a Jake’s cigar and it’s priced at $7.77 because it’s my favorite number, so it makes sense to do the ribbon cutting in the seventh year.”