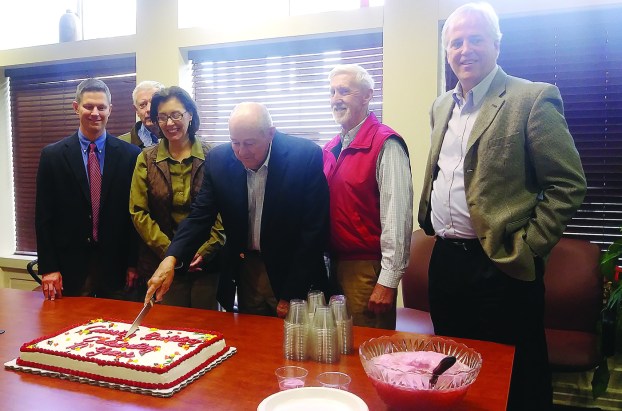 When a fire tore through downtown Nicholasville in 2005, it first ravaged buildings and then left them flooded; among the devastation was the historic W.N. Cassity Building — named for former Judge/Executive Neal Cassity — and, seemingly, the legacy the esteemed Kentuckian was to leave Jessamine County.

That all changed when Cassity, County Attorney Brian Goettl and several members of the Jessamine County Fiscal Court gathered to rebuild the structure a decade ago, dedicated to preserve not only the history of Nicholasville’s downtown area but also to honor Cassity’s contributions to the city.

“We were originally going to build on Oak Street, and then this property became available,” says Goettl of the new building, adding that because it offered more space than they needed, they were able to lease some of the space to the County Attorney’s office. This means the W.N. Cassity Building will eventually pay for itself, a promise that was made during the dedication ceremony 10 years ago.

On Nov. 17, Goettl and several members of the Jessamine County Fiscal Court gathered to honor Cassity at the building that bears his name to celebrate the decade of service the new site has provided; also in attendance were some of the first responders to the fire. A large cake dominated the table in a meeting room, where the history of the area could be seen in the form of colored glass bottles filling the windows. These were unearthed during the building process and are thought to be from around the turn-of-the-century, but they are the only signs of age in the building. After 10 years of use, not much has changed.

“It’s remarkable, except for a bit of wear and tear on the carpet, it looks the same.  It is truly on track to be a ‘100 year building,’” Goettl said in a press release.

With an outstanding 43 years of service to the people of Jessamine County, Mr. Cassity made a clean, dependable water source for everyone in the county one of his first priorities and stayed involved with various projects through the course of his career, right up until he stepped down as judge executive in 2014. Over the years, he earned a reputation as someone who would rather call on other voices and make decisions as a group than dictate what should be done, something that his peers still respect.

“I thought, we need to do something because it’s been three years since Neal was judge executive,” Goettl said in an emotional speech during the celebration. “Neal was not only a person that I worked with, but he was a good friend. He meant a lot to the county, he meant a lot to downtown.”

Cassity cut the cake during the ceremony and shared the afternoon with his friends, acknowledging that a lot of people had put some hard work into creating a space for public service.

“This is the Cassity Building and it has my name and I’m really honored by that,” he said. “But it’s not just my building, it’s everyone’s building.”