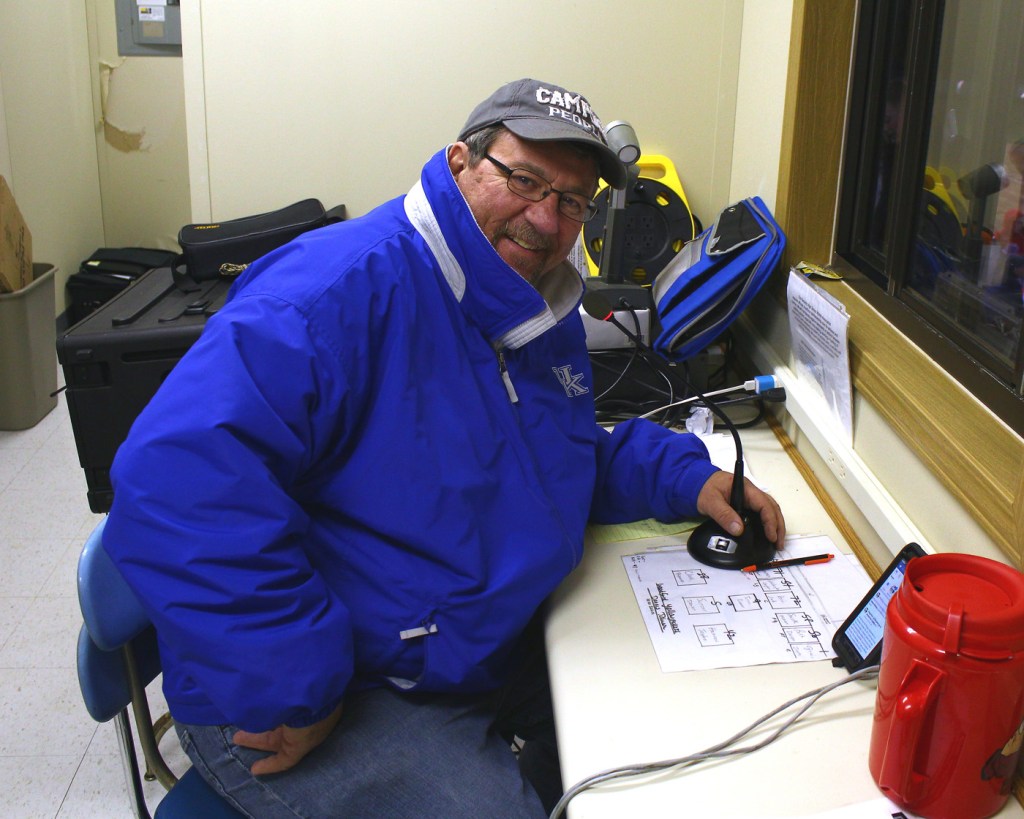 After 40 years in the booth, West Jessamine football announcer Doug Fain made the final calls of his weekly career last week.

Doug Fain grew up talking into microphones in Jessamine County. For 40 years, some of those mics were found at the West Jessamine High football field. Last Thursday evening, Fain sat down at the field’s microphone for the final time.

For Fain, the last play of the game was his last call.

Fain’s broadcasting career began in the summer of 1978 at the WNVL radio station in Nicholasville, working for its then-owner, Bill Laney. Laney was also the public address announcer for the Jessamine County High School football program. When the 1978 season started, Laney offered the 15-year-old budding disc jockey the opportunity to take his place calling a game for the team, that consisted of his own classmates on the field. Fain told his boss that he wasn’t any good at it, but he really liked doing it.

And so a 40-year labor of love began. Last week, it reached the end.

“When Cawood Ledford, who used to announce University of Kentucky football and basketball retired, he’d went 39 years,” Fain said. “So I joked with some people that while my talent level compared to Cawood is like comparing a pothole to the Grand Canyon, I can at least beat him on quantity,” Fain said with a chuckle. “I said, ‘I’ll just stick around for 40 years and beat his record.’”

Fain said that back in the 1980s, he signed a contract with the county’s board of education designating him the public address announcer at no charge, a designation that would hold true until one year’s notice was given. Last fall, Fain said he wrote a letter to the board stating that this season would be his last.

“Forty is enough,” he said.

“There comes a time in your life when you know that it’s time.” He said that his football-calling duty was like his pageant announcing at the fair, which he carried on for 30 years. He enjoyed doing both, but they each eventually reached their ends for him. He is ready to do other things.

“Forty years was my contribution to the school system,” he said. “Though it is a small part, I tried to help them. I hope it’s been a good contribution.”

Fain was quick to add that he will still be found behind microphones, courtesy of his work at local radio station JESS-FM and the KCAL old-time radio performances. He will also continue participating in select auctions and events where the vocal performance of a seasoned pro can help out a worthy cause.

Just as countless players have done on the field throughout his 40 years, Fain is handing off the  seat and microphone at the Jessamine West football field to his chosen successor, Marshall Tingle, an auctioneer and son of former Jessamine County Schools superintendent Kathy Fields.

“He filled in for me a couple of times last year and this year to get his feet wet,” Fain explained. “Marshall’s an auctioneer and he doesn’t mind talking to crowds. He’ll do fine.”

Leaving the post to Tingle means that his Friday nights will open up to more activities for he and his family. He said that over the years, there have been family camping trips at the horse park where he returned to the field to call a game, and rejoined his family afterward. That will be a problem he is looking forward to not having to worry about.

Over his 40-year tenure, Fain was absent for five games out of roughly 500, an attendance record that he said “ain’t too bad.”

Fain’s local sportscasting career included basketball games until the split of the high school. After that, football at West Jessamine eventually became his sole sports gig – at least on a regular basis.

“I still get asked to do like a senior night or eighth-grade recognition at a local school,” he said. “I like to do that.” He said that he would still be interested in giving a helping hand and vocal cord if needed, but his football game calling career is now over.

And now that it is over, he won’t have to learn the football rule book after all.

“I still don’t know a lot about it, even watching it,” Fain said of the game itself. “I don’t watch football on TV at all. I’m not a football fan. But it’s not about the sport, it’s about the announcing.

“I did learn the referee signals and what the penalties were,” he added. “But I have called ‘block in the back’ for 40 years, and I still don’t really know what that is, but I know it’s a penalty.” He compared it to beauty pageants, which he said he can announce without knowing how to be a contestant. It all comes down to the proverbial Gift of Gab.

“One of the talents I think God gave me was the ability to ad lib and not have a script,” Fain said. “That’s probably from the radio experience after all these years.” All these years indeed, a tribute to the love for a job that has been with him since 1978, when the ability to talk into a microphone transformed a shy teenager. A love that he chose over acceptance to Sullivan Business College in Louisville after his high school graduation to study computer programming.

Fain said he often wonders how things would have turned out had he chose the other path. At the end of the day, though, he is content with his decision. As for all of the West Jessamine football players whose games he has called over the past 40 years, especially the multiple generations he has been seeing, his voice has been an institution that will be missed across the field from end zone to end zone.

Without a block in the back in sight.