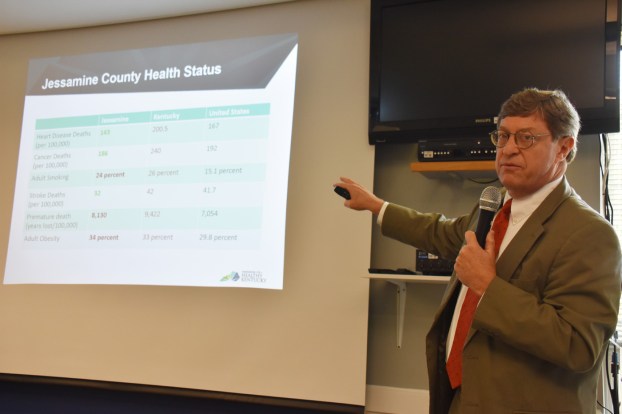 Kentucky has a lot of work to do when it comes to getting its citizens healthy, but there are clear first steps that can be taken.

That was essentially the message Ben Chandler, former attorney general and current president and CEO of the Foundation for a Healthy Kentucky, delivered to a crowded conference room at the Jessamine County Health Dept. on Tuesday. Chandler was the featured speaker of the Jessamine County Chamber of Commerce’s October luncheon.

Chandler said that the Foundation for a Healthy Kentucky is a non-profit and nonpartisan organization that was created 16 years ago with the goal of helping improve the overall health of the state’s population despite all current trends. He said that the organization was going to begin using policy to address the many issues that the state is battling.

“As you all know, we don’t lead the world in good health,” Chandler said. “And that’s a shame because my granddad always told me there were only two things that mattered in life. Those two things are your health and your faith. Everything else emanates from those things. ”

Chandler said that the citizens of the United States spend twice as much on health care per capita as the rest of the world, yet the country ranks 37 in terms of outcomes. He said that the life expectancy in America was lower than most other industrialized nations.

“The reason we are in this situation is that we have essentially created over time a health care system that is a rescue system,” he explained. “We spend our money on the back end after people have already gotten sick. When that happens it is more expensive.”

Chandler said the nation does not spend nearly enough money trying to keep its citizens healthy in the first place, yet doing so would lower health care costs tremendously.

According to data provided by the foundation, Kentucky’s economy is ranked 45th in the nation, despite being number 26 in terms of population. He said that those stats illustrate that the population is not as productive as it needs to be. One of the key reasons, Chandler said, was that an individual had to be healthy to be productive.

“You have to have a healthy workforce,” Chandler explained. “It’s hard for us to attract business into Kentucky for that reason. They [businesses] look at Kentucky and see an unhealthy workforce, and they understand that it costs them money on the front end in terms of productivity and it costs them money on the back end in terms of higher health costs and insurance costs.”

Kentucky, he pointed out, leads the nation in cancer and cancer deaths. He said the state had to make it a priority to correct the problem.

“Eastern Kentucky is about the most unhealthy place in this country,” he said. “But it’s not just there, it is the rest of Kentucky too.”

Chandler said diet and exercise are also areas needing serious attention and work statewide. In youth obesity, the state ranks 40th out of 43 surveyed. For adult obesity, Kentucky ranks 46th out of all 50. In the area of heart disease deaths, the state is 43rd out of 50.

In drug overdose deaths, the state is number 48th out of 50, illustrating how Kentucky’s loss of life per capita is near the nation’s top. Reports show a loss of 1,400 lives lost last year to drug overdoses, which he said was an all-time high. Chandler said that the drug situation was a true crisis.

Chandler said that data for Jessamine County in all health-related areas suggest that is is in line with the rest of the state. However, the smoking and cancer rates are well above Fayette County who has a smoke-free law.

The Foundation for a Healthy Kentucky has two suggestions for curbing the smoking problem, neither of which come at a cost to taxpayers: increasing smoke-free laws and increasing the tax on cigarettes.

“It’s been done in other states throughout the country, and we can do it here in Kentucky,” Chandler said. “We want to talk to our legislature and our localities about it.”

He said that if they are successful with the state legislature in getting a smoke-free law passed, then the foundation will begin a grassroots push at the city and county levels to encourage the leadership to pass smoke-free laws for public buildings, workplaces and restaurants. He said the goal is not to tell people they cannot smoke, but to use inconvenience as a method to help deter and decrease the problem.

Chandler said the current cigarette tax is $.60, but it needs to be at least $1.60 or more to make a difference, and that he was confident that such a tax would lead to a significant number of smokers quitting within the state and greatly prevent people from starting.

In addition, he said the state would acquire about $260 million in revenue annually to deal with the pension problem and other issues. The major hurdle, he said, to dealing with the issue in Kentucky is the tobacco culture and its history. However, its cost (each individual pack of cigarettes sold in the state leads to $35 in health costs down the line, according to data presented) and social effects have made change imperative.

He pointed out that while the drug epidemic cost the state 1,400 lives last year, deaths tied to smoking totaled 9,000.

October is Breast Cancer Awareness month. Breast cancer is the second leading cause of cancer death, and in Jessamine County,... read more