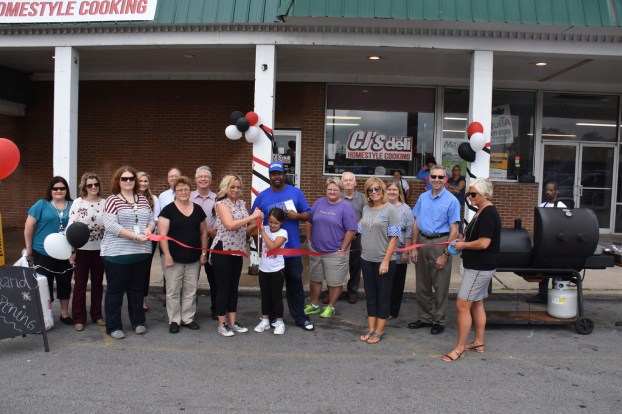 CJ and Laura Johnson, along with their children and staff, walked away from the grills at CJ’s Deli long enough on Wednesday to cut the red ribbon into the Jessamine County Chamber of Commerce.

After his passion for cooking led him to work at several restaurants over his career, CJ Johnson gave in to his wife Laura’s urgings to open his own eatery on Main Street in Nicholasville on June 2.

“I started really young, when I was like six or seven,” Johnson said of his knack for cooking. “My mom had to work on the weekend at a country club and she didn’t have a babysitter, so she would get me a bar stool and I’d sit in the back. She had me peeling potatoes, dicing potatoes, dicing onions and carrots and celery and stuff.”

Johnson said he liked it so much, that he gradually worked his way up from a butter knife to a real knife for the task at hand. He hasn’t stopped since.

The chef is a native of Lexington, but he and his family have now lived in Nicholasville for four years, and he said his goal of owning his own restaurant fills a need in the community.

“I had been working in so many restaurants, and I knew I could do it,” he said. “Everybody said Nicholasville needs a place like this anyway, so I thought I’d open up and get going at it.”

CJ’s Deli features daily specials and a full menu. It is open Tuesday through Sunday from 6:30 a.m. to 9:30 a.m. for breakfast and 11 a.m. to 7 p.m. for dinner. They deliver to both Nicholasville and Wilmore.

Asbury Theological Seminary and Asbury University are joining together for a series of events from Oct. 31 to Nov. 2... read more