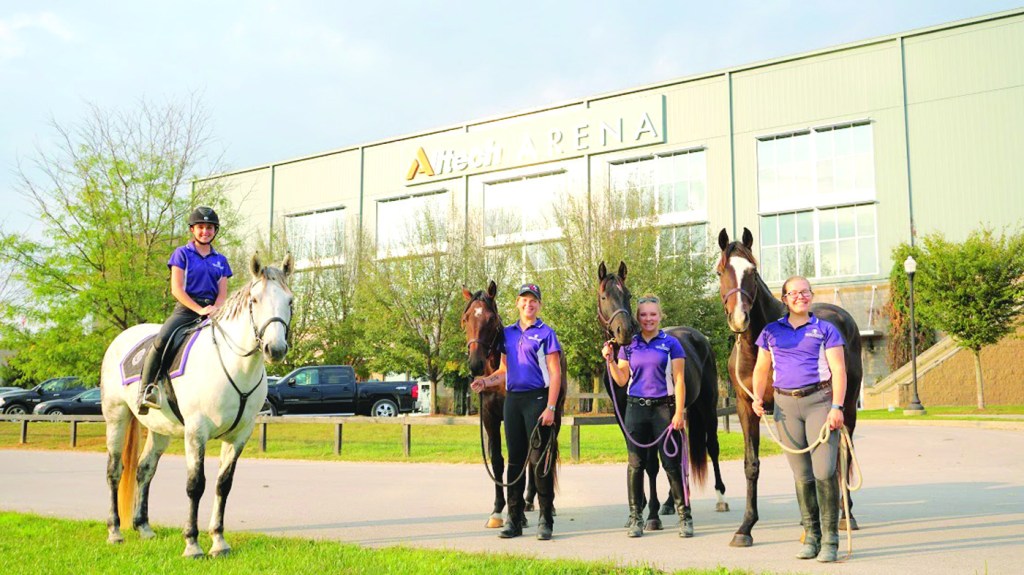 The Alltech Arena at the Kentucky Horse Park was site last week of the 33rd annual National Mounted Police Colloquium. Once again, students from Asbury University’s Equine Program took part in the event for valuable training for their own horse-training education.

According to Harold Rainwater, executive director of Asbury’s Equine Program, this year’s event featured more than 100 officers from 21 departments from across the U.S., with one from Canada. Rainwater said that the event consisted of a week-long continuing education session for mounted law enforcement officers.

“What they allow us to do from Asbury, and have for 15 years, is to participate in that because we train police mounts,” Rainwater explained. “Some of the horses that were there had been trained by us.”

This year, there were 10 students from the university taking part, only one of which was returning. In addition, the school had four horses currently at the school in exhibitions.

“We’ve been doing this since 2001, and we have been placing horses since 2006,” Rainwater said of the equine program at Asbury, which he founded.

“It takes about four years to get a horse from a baby to street-worthy. Last year was our best year ever, as we placed five horses in service — one in Las Vegas, three in Grand Rapids, Mich., and one in Lexington. All of those are premier programs, so getting horses into those programs was a big deal to us.”

In addition, the program has placed horses in Atlanta, Omaha, San Francisco, Louisville, Miami and Nova Scotia. An even larger feather in the program’s hat was one of its horses being featured prominently as the lead horse out of 80 in the last presidential inauguration parade.

“We have great students,” Rainwater said of the program. “They really work hard.”

Rainwater said that he was very pleased with last week’s event, both of the students and the horses, especially since three of the horses were 2-year-olds who had little time away from the barn.

One horse, who was 7 years old, actually competed in the competitions.

After last week’s event, he said there are law enforcement agencies knocking on Asbury’s door to purchase horses, which is a measure of the program’s quality.

“It was very, very successful,” he said of the event. “We had no injuries. We had a couple of falls, but that is going to happen when you’re pressed in these situations with obstacles and sirens and noise. To come out of that with your riders all in tact and your horses all sound, to us it was hugely successful. Nine of those students had never been there before, and were exposed to what our ultimate goal is, which is to train a horse well enough that a police department will purchase it for their unit.”

Selling horses to law enforcement agencies is not a directly profitable venture for the university past paying for their expenses, but the educational and experience value for the students is of immense worth. They leave the program with a resume stating that they have trained a horse, and they track that horse for the rest of its life.

“We had one student who trained a horse that went to San Francisco with the National Park Service, and he went all the way to San Francisco just to see his horse that he had trained,” Rainwater said. “It’s a pretty big deal. They stay in touch with their horses.”