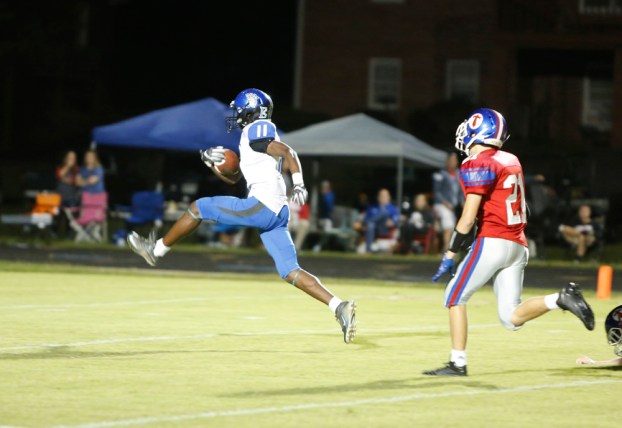 Jaguars outlast Mercer on the road

For the past two years, the game between East and Mercer County has decided the championship of District 4A-5, and the Jaguars gained the upper hand in the battle for this year’s district title by defeating the Titans 30-27 Friday night at Alvis Johnson Field.

The Jaguars scored 30 unanswered points by controlling the line of scrimmage and held off a late Mercer comeback attempt to beat the Titans for the second straight year.

East won this game by the same score last year en route to its first district championship, and Mercer rode a 19-0 victory to a district title in 2015.

“The last two years, Mercer County and East Jessamine have only beat each other in this district … and we knew if you’re going to win this district you’ve got to beat Mercer County,” East coach Michael Bowlin said. “It puts us out front and gives us a chance to control our own destiny.”

Connor Hearn carried the ball 36 times for 177 yards and two touchdowns and threw a halfback pass for another score to lead East (3-4, 1-1) in its district opener.

East scored on three consecutive possessions following a turnover on its first. Cameron Garrett’s 41-yard touchdown pass to DeAnte Sanon early in the second quarter gave the Jaguars a 14-7 lead, Hearn’s 4-yard pass to Storm Wilson on fourth down made it 21-7 and they added a safety shortly before halftime.

Hearn carried the ball on the first seven plays of the second half, scoring from 4 yards out to make it 30-7.

Mercer (4-3, 1-1) got off the ropes with a 33-yard interception return for a touchdown by Jackson Lewis but still trailed by 16 points when the fourth quarter began.

Lewis’ 3-yard touchdown run made it 30-20 with 9:25 remaining, but he was stopped on a two-point conversion attempt that would have made it a one-score game.

After East burned more than 6 minutes off the clock, Aaron Johnson caught four passes totaling 86 yards to get Mercer to the 1-yard line. Lewis scored from there with 2:04 to play to pull the Titans within three points, but they never got the ball back.

Gunnar Gillis completed seven of 14 passes for 153 yards, including a 72-yard bomb to Trevon Faulkner for Mercer’s first score. Lewis had 73 rushing yards on 11 attempts.

Mercer ran only 31 plays and possessed the ball for only 11:20. The Titans finished with 209 yards, including just 56 on the ground, while East had 251 rushing yards and 352 yards in all.