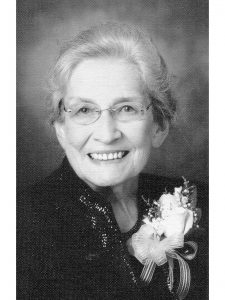 Dr. Phyllis Jean Davidson Corbitt died Friday, Sept. 22, bringing to a tender close a life filled with blessing, gratitude, and service. Born the third child of the Rev. Harrison and Mary (Love) Davidson, Sr., Phyllis grew up in a family of strong-willed peopled intensely devoted to God, hard work, music and each other.
Knowing from an early age that she wanted to be a missionary to Africa, she enrolled in Asbury College in 1942, and there discovered her call into medicine. While in college, she also met and fell in love with her “buddy” Duvon C. Corbitt, Jr.
Marrying in 1947—after a courtship interrupted by Duvon’s service in World War II—they attended Vanderbilt Medical School together, graduating in 1952 with Phyllis the only woman in the class. Medical and surgical residencies at St. Joseph Hospital in Lexington brought them back to Kentucky, the place they would always call “home.” In 1954, their first child Jeannie nearly died of methemoglobanemia ten days after birth, but Phyllis correctly diagnosed the condition and its cause on the way to the hospital: analine die poisoning from the ink used by the family’s diaper service. In 1957, Duvon, not to be outdone by his wife, made a last-second, heart-stopping dive along the edge of a cliff to prevent two-year old Danny from tumbling over.
Training in tropical medicine eventually took Phyllis and Duvon to the Leopold Institute in Belgium, the first time in 1957 for Duvon and the second in 1963 for Phyllis. Between 1957 and 1967, the couple staffed and directed the 200-bed Piper Memorial Hospital (now Samuteb Hospital) in the Katanga province of the Democratic Republic of Congo.
Following widespread violence that erupted after the country’s independence on June 30, 1960, Phyllis—then six months pregnant with Doug—was evacuated in dramatic fashion, along with Jeannie and Danny, by a U.S. Air Force C-47 (the military version of the venerable DC-3). Duvon chose to forego evacuation in order to keep the hospital running.
During a second term in the Congo, the couple once again came close to losing a child. This time it was five-year-old Dougie when he suffered prolonged respiratory arrest (roughly four minutes) during surgery for a branchial cleft cyst. The nurse anesthetist’s repeated attempts at intubation failed, and the couple had to break scrub to jam the tube down their son’s trachea.
In 1967 the family returned to the States on furlough shortly before Duvon assumed the position of founding dean of the medical school for the Université Libre du Congo in Kisangani. In 1970, however, when Duvon was offered and accepted the position of Executive Medical Secretary for the United Methodist Church’s Board of Global Ministries, Phyllis entered full-time private practice as a family physician in Wilmore and served there until her retirement at age 89 in 2013. Between 1974 and 1998, she also served as physician for the Student Health Clinic at Asbury College.
A physician who continued to make house calls decades after the practice had gone out of style, her service was not limited simply to the medical care of her patients. She was an active member of the Jessamine County Board of Health and a committed member of the board of Evangelism Resources, the Wilmore Campmeeting Association, and the Asbury College Alumni Association. Her community involvement also included the United Methodist Women, the Wilmore Community Service Center, and the Wilmore Women’s Club.
She is survived by her three children and their spouses: Jeannie Jones (Raleigh), Duvon (“Dan”) C. Corbitt, III (Mary), and Doug Corbitt (Peg); five grandchildren: Matthew Corbitt Jones (Elizabeth), Elisabeth Jones Chang (Ed), Andrew Jones (Kristin), Annie Corbitt, and Jeannie Corbitt; and seven great-grandchildren: Mary Beth Jones, Anna Leigh Jones, Stephen Corbitt Jones, Sarah Katherine Jones, Levi Davidson Jones, Samuel Edward Chang, and Katherine Janine Chang. Her family honored her Monday at 10 a.m. in the Wilmore Free Methodist Church and she was laid to rest beside her beloved husband in Wilmore Cemetery. Honoring her as pallbearers were Matthew and Andrew Jones, Philip and David Martz, Saumuel Naaman, John Gillespie, and Dr. Glen Spann. Honorary bearers were Dr. Harold Spann, Rev. Roy Lauter, Mayor Harold Rainwater, Gayle Lawerence, Dr. David Brabon, Paul Braum, Leonard Fitch, Arv Metcalf, Wes Eismann, and Dr. John Musick. The family received friends on Sunday at Hager & Cundiff Funeral Home starting at 4 p.m. and ending at 7 p.m. and at the Church on Monday starting at 9 a.m. until time of her service. Hager & Cundiff was honored to serve the Corbitt Family.
In lieu of flowers, donations may be made to the Phyllis D. Corbitt Scholarship Fund at Evangelism Resources or the Corbitt Memorial Scholarship at Asbury University. The family wishes to express its profound gratitude to the citizens of Jessamine County for the extraordinary love and consideration shown Dr. Corbitt over the years. After evening prayers during which many tears were shed on behalf of the sick and the suffering, Mom would frequently shake her head in wonder and say, “We are so blessed.” To have been a part of and to have served such a community was indeed a blessing. Thank you.

James “Jim” Garner Smith, 88, went to be with his Lord and Savior on Monday, Sept. 25, 2017. Jim was the son of the late William and Florence Garner Smith and foster son of the late Bernard and Carolyn Bloemer. He was also preceded in death by his foster brother, Tommy Bloemer. He is survived by his loving wife of sixty five years, Irene Cunningham Smith; son Eli Smith and wife Rebecca; daughter, Cary Smith York and husband Darrell; grandchildren, Corey Thomas Smith and wife Sandy and Kayla Raye Ruggiero and husband Jon; and great-grandchildren, Jaxen, Dallas, Maddie, Alana and Steven. Jim was a member of Edgewood Baptist Church, Nicholasville, and served the Lord as a Sunday School Teacher, deacon and church leader for many years. He was a founding member of the Jessamine County Beef Association, and served on the Jessamine County Fair Board and Jessamine County Fire Board. Jim sold lumber for over forty years for the Central Kentucky Supply and Stratton’s Lumber Company. Jim was a graduate of Berea High School and the University of Kentucky. He used his agriculture degree from the university in farming and raising Angus cattle in Jessamine County for many years. Jim also enjoyed fishing with family members and friends. Funeral service will be 11 a.m. Friday at Edgewood Baptist Church with Rev. David Wotier, Rev. Bob Blankenship, and Rev. Samuel Schmidt officiating. Burial will follow in Camp Nelson National Cemetery. Visitation will be today (Thursday) from 4 p.m. until 8 p.m. at the church. Family and friends will serve as bearers. Honorary bearers will be the Jim Smith Sunday School Class. Online guestbook at www.BettsandWestfuneralhome.com.