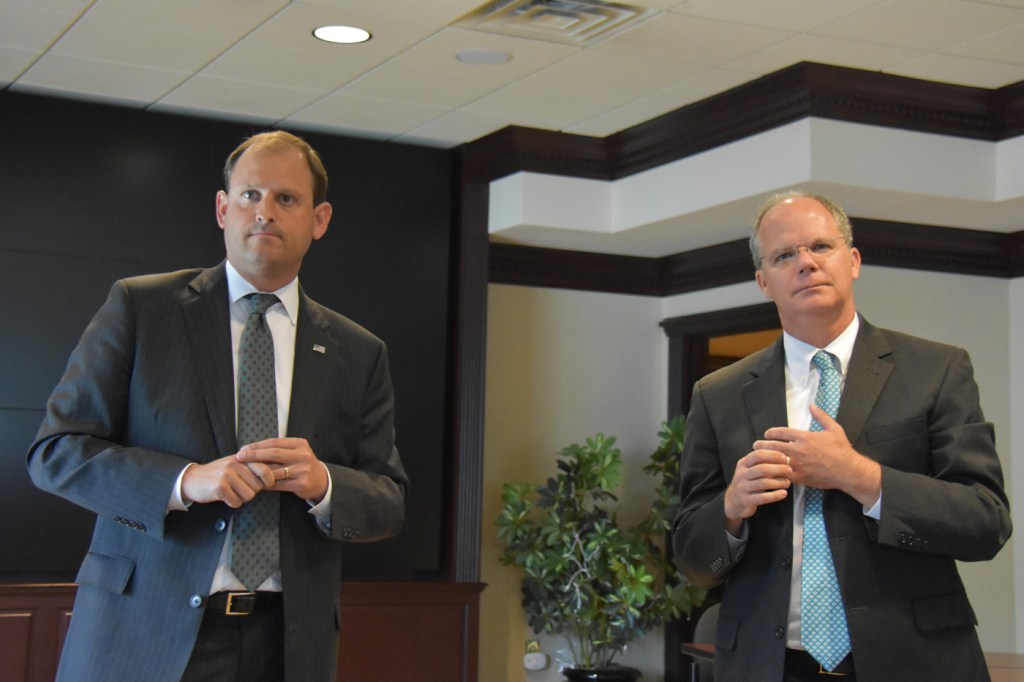 The audience was updated on some of the most pressing national issues from local Congressmen Andy Barr, Representative of the state’s sixth congressional district and Brett Guthrie, Representative for its second.

Rep. Guthrie’s portion of the engagement centered largely on the status of healthcare legislation. He addressed criticisms of Congress’s handling of the repealing and replacement of the Affordable Healthcare Act, stating that he has worked on the Medicaid architecture of the new bill for two years as part of the healthcare subcommittee. He said that delayed retrieval of information from the previous administration slowed down the process until March of this year.

Guthrie said that the bill presented did cover preexisting conditions, despite arguments against it. He also said that 22 million citizens would not lose coverage under the new bill despite reports to the contrary. He said that based on the score from the Congressional Budget Office, 14-15 million Americans would decline the coverage if the mandate was lifted. He said states could choose measures such as high risk pools for the remaining 8 million citizens.

He added that they could only repeal elements of the Affordable Care Act that directly affected the budget. The bill passed in the House, and needs 51 votes in the Senate to move it forward or send it back to the House before Sept. 30, and 60 votes after Oct. 1.

The next topic Guthrie discussed was tax reform, which he said had to be achieved in October regardless of what happens with healthcare. He said that there has been progress in regulatory relief, which is triggering confidence in companies and investors.

Rep. Barr began his turn on the floor by addressing geopolitical threats to the country. He said that Russia was engaging in its largest military exercise in Western Russia and Belarus since the end of the Cold War, which is of concern to the U.S. and other NATO countries. He said that Iran remains a threat due to their nuclear arms program and support for terrorist proxies. The current threat that is getting the most coverage right now is North Korea, who he said justifies a high alert in America.

Barr said that the threat from North Korea is graver than what we have seen in the past, blaming the foreign policy and failed approach of the previous administration’s strategic patience. He explained that as chairman of the nation’s Monetary Policy and Trade subcommittee, he has been given a new duty to implement sanctions against adversarial countries to the U.S. via foreign asset control and economic devices.

He said a bill has been drafted that changes primary sanctions to secondary against countries that do business with North Korea due to continued belligerence by that country. He said that the new sanctions will help with negotiations with China and Russia, who have flows of financing going into North Korea. He said that military presence in the Pacific region by the United States was not to provoke war, but to add substance to diplomacy.

On the topic of tax code, Barr said that tax reform is necessary because the nation’s current tax code is 2.5 million words in length, nearly three times its length in 1986 when reform was last carried out. He said that it costs individuals and families $99 billion every year, and $147 billion for businesses, just to comply with the tax code.

Barr told everyone that this fall, the big argument they will hear is that the tax reform is simply cuts for the rich, but in fact, 80 percent of the corporate income tax liability in the country is paid by labor. He said that if the goal is to raise the wages and incomes of most workers in America, the corporate rate must be lowered.

“Economic growth is the key to upward mobility,” Barr said. “If there is one thing you remember from my talk here today, remember this: we are going to double the standard deduction. That is a tax cut directed at low to middle income working Americans.”