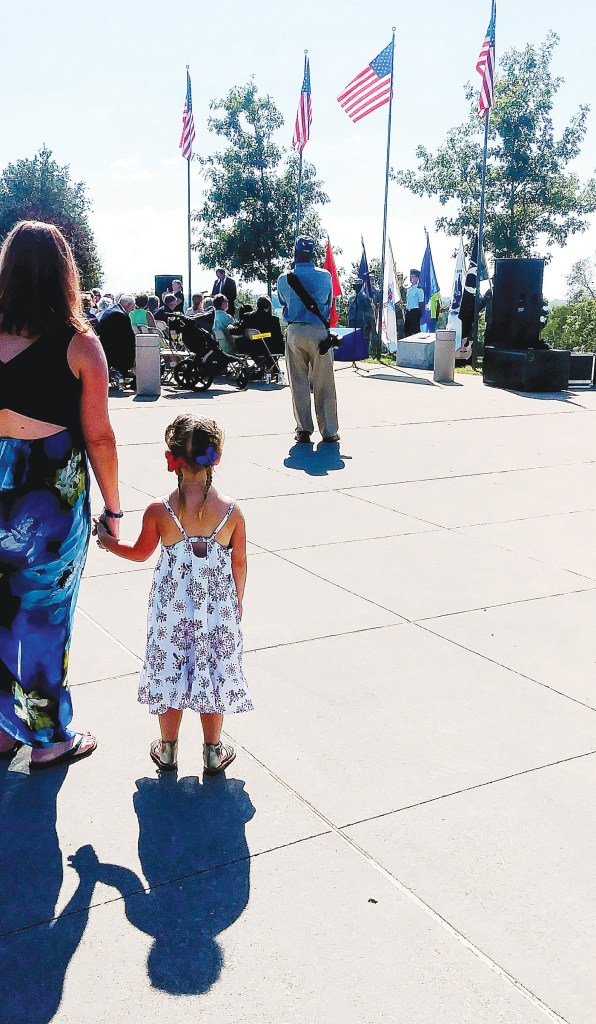 On an exceedingly hot but beautiful September Sunday, a hilltop gathering sits quietly in folding chairs, awaiting the beginning of a ceremony that unites them all in high emotion.

It’s a day for recognition and remembrance, the dedication of a memorial situated amidst rows of white headstones at Camp Nelson National Cemetery, and the assembled group is made up of the friends and family members of fallen heroes who called Kentucky their home.

Also in attendance are Congressman Andy Barr and several members of various branches of the military, including American Legion Post 18 from Stanford, there to perform a rifle salute. With American flags snapping against the sky as if to underscore the importance of his words, Col. Steve Parker, USAF (Ret.), begins to address the audience, urging the family members to come forward and place their yellow roses on the monument.

It’s a bittersweet moment for many of those in attendance; the Gold Star Family Memorial is meant to honor the sacrifice their loved ones made for our nation, yet it is also a reminder of the grief that is still so fresh in their minds.

That grief can be overwhelming when we face it alone, said keynote speaker Col. Kurt Buller, USAF (Ret.), and it’s what makes these occasions necessary.

“That’s why moments like these are important. So we can talk about our grief and share it,” he said.

The monument was inspired by one placed in Hurlburt Field, Florida by the Air Force Special Operations Command. When Mark and Barbara Roland saw it, they knew they wanted something similar to honor their son, Capt. Matthew D. Roland, USAF, who was killed in Afghanistan in 2015. Working with other local Gold Star families and the Lexington-Bluegrass chapter of the Air Force Association, among others, the Rolands championed the project with support from the Central Kentucky Veterans Committee. Now, the memorial will stand as a tribute to all fallen Kentucky service members and their families, including Capt. Roland.

The monument itself, an understated yet elegant piece, joins existing memorials for the U.S. Navy and veterans of the Korean War. The inscription reads: “Dedicated to the families left to remember and honor the sacrifice of their loved ones in the service and cause of freedom to a grateful nation.”

As the loved ones of those honored stand up and introduce themselves one by one, the emotion of the day’s events is evident in their voices and is carried over into a performance of “Wings Of A Butterfly” by Gary Pack; it can be found in the proud battle cries from each service branch as their service hymn is played, and in their straight-backed formations.

When the heat of the day begins to stretch out, fresh-faced young men in fatigues haul buckets of cold water around the gathering, handing frosty bottles to anyone who looks overheated. It’s in this sweet gesture that we see the thread of Congressman Andy Barr’s words begin to ring true; as he took the podium following Col. Buller, Barr spoke of a community that holds up the loved ones who are left behind, answering sacrifice with gratitude.

“Gold Star families do not carry the heavy burden of their losses alone, Barr said. “As a community, and as a grateful nation, we come here today as just one example of how we share these meaningful losses together as a country.”