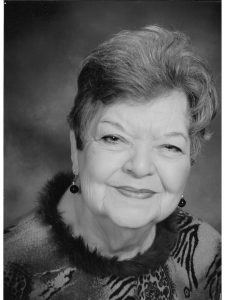 Mary Jean Jones, 84, of Nicholasville, Ky., formerly of Pinch, W. Va., passed away peacefully in her sleep on Sept, 13, 2017. She was born March 30, 1933 in Webster County, W. Va. After graduating from high school, she moved to Washington D.C., where she worked for the federal government. In 1961, she moved to Gettysburg to work as a secretary to President Eisenhower for two years after he left the White House. Upon returning to Washington, she worked for the GSA for 10 years. She then moved back to W. Va. and worked as a legal secretary until her retirement in 1998. She loved reading about and keeping up with politics. She was a member and Eucharistic Minister at Our Lady of the Hills Catholic Church in Pinch, W. Va. One of her greatest joys in life was being ‘Maw Maw’ to her grandchildren. She loved playing with them and watching them grow. She will be truly missed by her family. The family would like to send a special thanks to Terry and Misty from Hospice of the Bluegrass for helping us care for her during her illness. She was preceded in death by her parents, William Roy and Jessie Jones; brother, Bill Jones, and sister, Jessie Lee Bennett. Survivors include daughter Jessie Woolley of Nicholasville, Ky.; grandchildren Eric Woolley of Nicholasville and Kristin Woolley of Columbus, Ohio; sister Naomi Legg and her husband Jerry Legg of Pinch; nephews Jerry Legg, Jr., Michael Legg, Richard Bennett, George Bennett, and Fredrick Bennett; nieces Joan Hawkins, Debbie Wyatt, and Lisa Bennett. A private memorial gathering is planned. Memorial donations may be made to Bluegrass Hospice Care in Lexington, Ky. or Our Lady of the Hills Church in Pinch, W. Va.