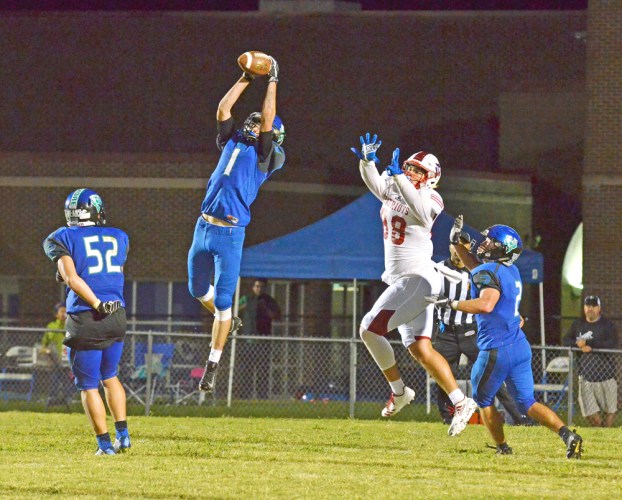 The East Jessamine Jaguars survived a valiant comeback effort by visiting Lincoln County Friday night to pull to .500 on the season.

The Jags (2-2) never trailed in the game, getting off to an explosive 14-0 start and posting a 27-13 lead late in the third quarter before the Patriots rallied. Lincoln put together back-to-back scoring drives in the second half and were on the move again in the closing seconds of the game, but they would come up short in a 27-26 loss to the Jags Friday at The Jungle.

“It was a carbon copy of our first game (loss) where we jumped all over 14-0 against Walton-Verona and then here they came,” East Jessamine coach Michael Bowlin said. “And it came off a turnover just like it did with Walton-Verona. I was even telling the guys in the headset, ‘We’ve got to talk to our kids about this not being a repeat of our first game of the season.’ I’m proud of our coaches and our kids that came out ready to play, but it seems like when a little bit of adversity hits us we kind of back up and go in a shell a little bit and we give them some easy things. So we’ve got to work on that perseverence.”

“But late in the game, when we had to have it, we made some plays, our coaches made a lot of adjustments that obviously wound up winning it for us.”

One big ‘winning’ adjustment for the Jaguars came with 1:34 to play as Lincoln’s Emma Kaiser lined up for the extra point kick to tie the game at 27-all. Kaiser, who has 11 point after kicks in three games, would not get much air on this kick attempt as Connor Hearn burst through the Lincoln line to block her kick for the win.

“The blocked extra point was Coach (Jordan) Marcum’s idea,” Bowlin said. “He had a different blocking scheme that he thought would get there and it did. It worked great for that last extra point. They had their strength set to our strength (earlier PATs), so then when they lined up on that last extra point we just flipped it and we went stronger on the other side that we thought we might be able to bust through the line and get it and our kids executed it perfect.”

“I know they’ve got a really good kicker and she does a great job and I hate to see it come down to that. But we’ll take the win. Our kids worked hard all week,” said Bowlin.

East got a short field for its first drive of the game, taking over on the Pat 9 after an interception by DeAnte Sanon off Lincoln quarterback Bryson Yaden. Traveon Dean put up the first touchdown on the scoreboard scoring on the first play.

The Jags made it 14-0 midway through the second quarter as quarterback Cameron Garrett, who was 6-for-10 for 82 yards, hit  Wilson for a 19-yard touchdown pass. Hearn ran in the two-point conversion.

Lincoln’s Tra Carey, who rushed for 92 yards and three touchdowns, put together two straight scores to get the Patriots within 14-13 before the break. He scored his first TD, a 5-yard scoring run, with 9:54 to go in the first half with Kaiser adding the kick. A Jaguar fumble set up the score. Then with 1:52 to go, Carey capped off a 43-yard drive with a diving leap into the end zone from the 6 to make it a one-point game.

Wilson, who had two touchdowns in the win and led the Jags’ offense with 111 yards on six carries, had the East Jessamine fans on their feet after he zigged and zagged his way behind the line of scrimmage at the Jags’ 15-yard line before eventually escaping the Lincoln “D” and breaking into an open field for an 85-yard touchdown run to make it 20-13, East, at the half.

“Storm’s an electric player,” said Bowlin. “I told our kids in every film we’ve played this year we’ve only had one dynamic run through three games and it was Storm Wilson in the first game of the season here against Walton-Verona. I said, ‘We’ve got to have more of those. If we’re going to be a really good football team, we’ve got to score from farther out than the 3-yard line. It can’t be an 80-yard methodical drive. We’ve got to get some easy touchdowns.’ So we did that tonight. He made a great play.”

“We made some really, really nice plays early in the ballgame that got us going, but the one that really probably swung the game in our favor was Storm’s touchdown because, at that moment, we’re really thinking, ‘Okay let’s just go into halftime. We’ve got a one-point lead we’ll be fine.’ And then he cracks it out of there and we’re gone for a touchdown and we’re thinking, ‘Wow! we’re going to be in good shape.’”

There was a moment during the long TD run, however, where Bowlin questioned whether Wilson could get away from Lincoln’s defense.

“They actually did a great job of smelling it out. Their defense was sitting right on top of it, but  Storm was just Storm. He does what he does. He cut back against the grain and found a crack. He’s really, really fast. He’s our most dynamic player. Does a great job. Caught the first touchdown down there on the pass. Storm was kind of a one-man game tonight at times. He’s got that capability.”

Hearn, who had 48 yards rushing on 10 carries, extended East’s lead to 27-13 with 7:26 to play in the third quarter. The Jags took possession at the Lincoln 30 after a short punt and, on the second play from the line of scrimmage, Hearn took the ball in from the 20-yard line.

Carey ignited Lincoln’s second-half comeback effort when he tacked on his third touchdown of the night at the 3:06 mark of the third quarter. Carey capped off a 15-play, 75-yard drive with the 6-yard scoring run and Kaiser added the point after kick to make it 27-20.

After Hearn blocked Kaiser’s kick, Lincoln still had one last chance at the win.

After forcing the Jaguars to punt, Lincoln took over at its own 15-yard line with 12.4 seconds still on the clock. Yaden hit Josh Salyers for a 28-yard pass out to the 43, leaving five seconds on the clock to go for a potential game-winning TD pass. Yaden got off the pass, which was intended for Salyers, but the Jaguar defense was there to bat the ball away as time expired.

“I’m proud of our coaches and kids tonight for not letting this be a repeat of Walton-Verona, coming back to take the win,” said Bowlin.

By Will Osborne Contributing Writer A stingy defense and powerful rushing attack leads East Jessamine to a 22-14 win at... read more