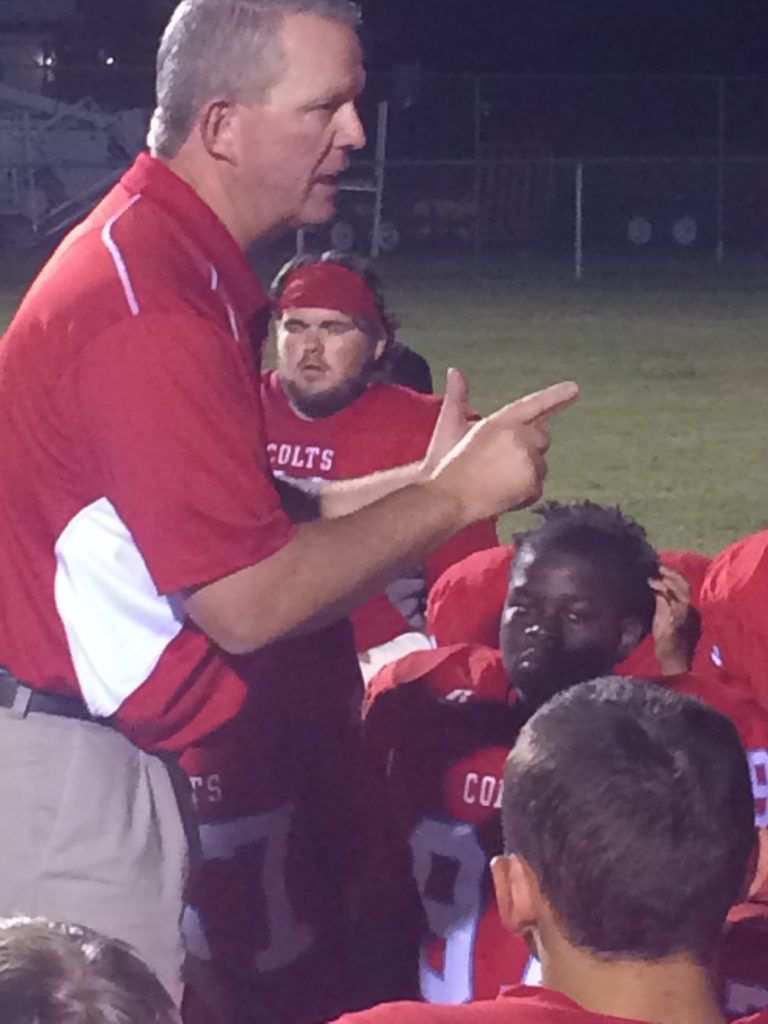 When a reporter asked West Jessamine football coach John Gilliam this past week what he likes about his senior quarterback, Jacob Humes, Gilliam laughed and threw the question right back.

“To be honest with you, what DON’T you like about him?,” Gilliam said of Humes after the Colts improved to 3-1 with a 20-0 dismantling of visiting Russell County Friday night. “And I’m not just talking about on the field. The kid has like a 3.5 GPA, and he’s an unbelievable leader. I could stand here and talk about what he does off the field, in academics, and in that school building over there even more than out here.

“But when he’s out here, Jacob is all business. He’s a leader, and his teammates respect him. Because, you look at him, he’s probably the second or third strongest guy on the team. So he’s no stranger to the weight room. And he does stuff by his actions. He’s still a great leader verbally, but he leads by his actions, and the kids follow.”

Friday’s dominating win over Russell County’s Lakers (0-3), was a typical balanced performance by the Colts on the offensive side, and an improved effort defensively.

But those numbers don’t show how calmly, but aggressively, Humes went about his business.

“We’re only four games in, and there’s a lot of room for improvement, but things are going pretty good,” said the glass-is-half-full Humes.

“But we’re definitely getting better.”

Humes’ tale is made all the more remarkable by the fact that this is the first year he’s started at quarterback since a freshman season on the junior varsity team.

Humes suffered a badly broken arm a year later that knocked him out of action as a sophomore. And last year he spent much of the season at linebacker and running back on a WJHS bunch that finished 3-8.

All that feels like a distant memory now for a Colts team in unchartered territory, riding a three-game win streak into Friday’s home game with 0-3 Nelson County.

When Giliam took the West Jessamine job this past spring, one of his first decisions was to move Humes to quarterback, a move that Gilliam said both Humes and his parents, Ron and Deb, heartily supported.

“We moved Jacob to quarterback, and said, ‘Hey, we want to commit you to this position,’” Gilliam said. “And he and his family supported that. They are unbelievable people. They’re like, ‘Whatever it takes, whatever you need him to do.’”

Humes appears to hold no grudges against anybody for his delayed ascension to varsity quarterback.

“Honestly, I was just happy to get to play what I played,” Humes said of his 2016 role. “I thought linebacker/running back were really fun positions. It’s not about the position, it’s about the sport.”

Gilliam, on the other hand, admits he wishes Humes has more experience at quarterback.

“I wish he was a sophomore,” Gilliam said with a smile. “Because he’s still learning to read that option. From actual quarterback technique, he still has a lot of work to do. But, he loves his role, and he knows that he’s not always going to be the star. But he can definitely run this team.”

Gilliam emphasizes the word T-E-A-M because the Colts are far from a one-trick pony.

West Jessamine’s offensive output vs. Russell County included some 262 rushing in an attack that can beat you with straight ahead power, read option, and through the air.

The other two West Jessamine touchdowns came on runs of 13 and 3 yards by Humes. The other points by the Colts came on a two-point conversion pass from junior Asher Fitch to Horne.

“This offense really suits me,” Humes said. “But it helps that I have a great offensive line and great receivers, too.”

This appears to have the makings of a special season for West Jessamine, under Gilliam, who came here from Boyd County last spring, and also previously had long coaching stints at Morehead State and Union College. But Humes refuses to look too far ahead.

Humes is also sorting out his future beyond this football season. He plans to attend Western Kentucky University, and said he’d love to play football for the Hilltoppers, but he won’t sell his soul to do so, so to speak.

“I’m going for an education,” Humes said. “I’m going to college for physical therapy. When I broke my arm two years ago, I went to Donald Greg Pitts in Lexington, and I loved everyone over there. I think it’s my calling. I think it happened for a reason.”

“If I got to go to a great college and play the sport I love, that’d be amazing, you know?” Humes added. “It’d be icing on the cake.”