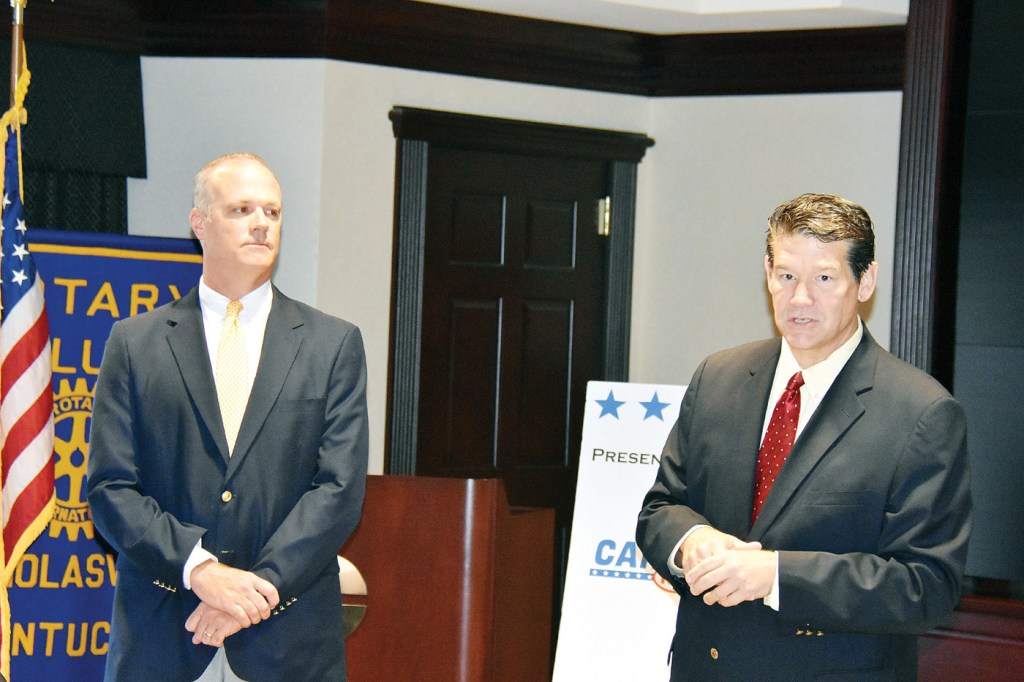 The Jessamine County Chamber of Commerce held its second Rooster Booster event of the summer last Thursday at Central Bank on Main. State Representative for the 39th District Russ Meyer and Jessamine County Judge Executive David West were the featured speakers for the event.

Meyer gave updates on the status of $11.2 million East Brannon Road project, the $23.7 million southern portion of eastern bypass project which will begin letting in next month, as well as its $15 million center portion and $38 million northern portion. He also said that the right-of-way portion of the Y-intersection near Wilmore was being addressed, but no letting date has been set. He also said that West Brannon Road was a “work in progress,” and the widening of the Third Street Bridge was one of the top three projects being looked into by the task force.

Meyer then discussed what he described as the biggest issue the state had ever faced, the pension situation. He talked about the different types of pension programs in the state, and said that the pension issue began looming during his term as mayor of Nicholasville, and that the sate was now going to have to address it the way that local governments have already had to deal with the challenge. The lack of funding for the program from the mid-90s to 2008 has led to a crisis that he said he said would require a bipartisan effort with locked arms to work through.

“I know that everyone is anticipating going into a special session to work through this,” Meyer said. “I know that everyone has a lot of questions about what’s been proposed, and what they want to see done.” He said that there are three pieces to the issue that must be solved: the revenue component, the cutting of expenses to show efficiency and the benefit perspective within the pension itself.

“It’s going to be an important couple of weeks coming up,” Meyer said. “I am looking forward to it because I have already been through that process here as your mayor, and already had to make those tough decisions and see them through.”

Judge West began his portion of the presentation by stating that collaboration between the city of Nicholasville and county was at an all-time high, talking about the new economic initiative that has spurred the purchase of about 80 acres for a new industrial park on the western bypass. He talked about the new combined tourism entity and becoming a Work Ready Community thanks to the effort by the Jessamine County School system.

“We have to continue to be a good community because companies look at the whole picture now,” West said. “They want to know if their executives and their employees are going to have a good quality of life. So it is up to both governments, and Wilmore, to build that.”

One of the biggest issues that West said the county is facing involves its roadways. He said that the county is growing at an alarming pace, and the roads are being traveled at rates they weren’t build to handle. He said that everybody needs to slow down.

West also addressed the initiative that has been spearheaded by Rep. Andy Barr to earn Camp Nelson a National Park designation, which he said would take the responsibility out of the county’s hands but land many more resources for the park.

The forum concluded with questions regarding the installation and implementation of another river lock, issues with the traffic lights and congestion and crosswalk pedestrian accidents on Main Street in Nicholasville, as well as the hazardous highway situation at the Y-intersection north of Wilmore.