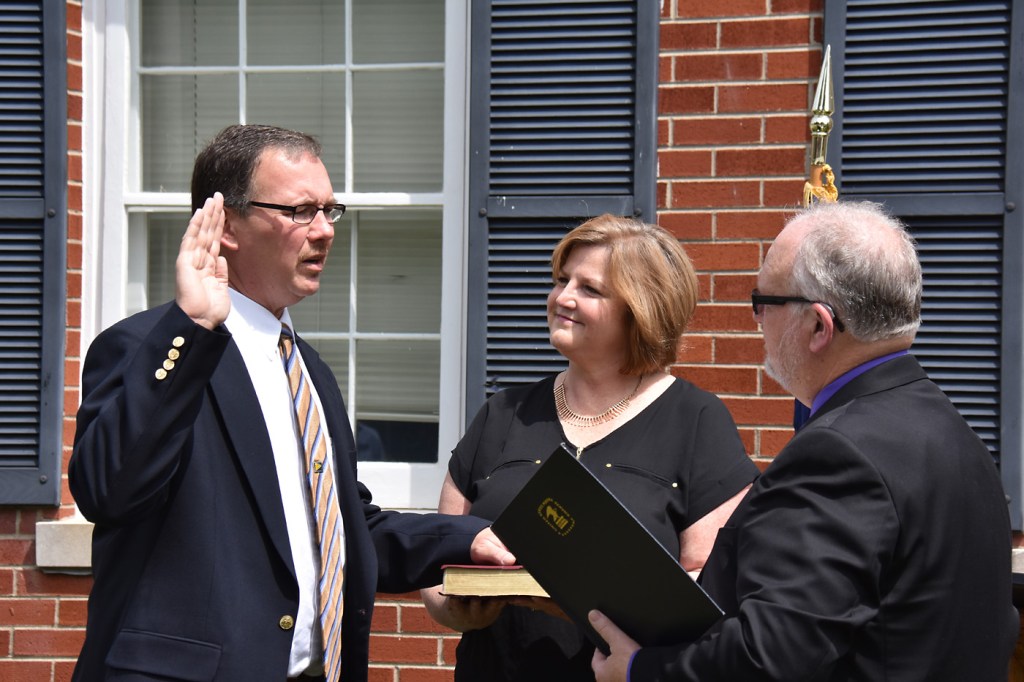 Tony Shearer being sworn in as Wilmore Postmaster.

For Tony Shearer, a resident of Wilmore for over 30 years and United States Postal Service employee for nearly 25, being sworn in as the Postmaster of Wilmore’s Post Office is the achievement of a longtime goal.

Shearer began his career as a carrier in Danville in 1991 at the suggestion of his brother-in-law, who worked as a clerk at that post office. At that time, Shearer — who had served in the United States Army for six years and was an Honor Graduate from the Army’s NCO Academy — said he was working at Thomson-Hood at the Department of Veterans Affairs.

After making the career move and working at the Danville post office for two years, Shearer transferred to Bluegrass Station in Lexington, where he worked his way up from carrier to supervisor.

Then, his career took him to Nicholasville, where he worked for six more years as a supervisor. About 10 years ago, he took the postmaster position in Salvisa before transferring to the Officer In Charge seat in Irvine. After a stint as postmaster in Hustonville, his career finally returned him to Wilmore in January.

According to Shearer, his last transfer has brought him home.

“It’s a nice, small community and a close-knit group of people,” Shearer, who has served as a special deputy with the Jesssamine County Sheriff’s Office since 2011, said of the town. “There’s a lot of folks that are like family. It’s just one big family here.”

Shearer said that it was good to return to the town and provide the services that the residents want and expect from the United States Postal Service.

“The Postal Service has been very good to me over the years,” Shearer said. “Evidently, it’s made an impression on my family because my son has been a carrier now in Nicholasville for almost five years and I’ve got a new daughter-in-law for about a year, and she’s a clerk there in Nicholasville.”

Shearer was sworn in with his wife of 32 years, Amy, by his side. John Dampier, the Frankfort Postmaster and acting manager of operations program support out of Louisville conducted the ceremony and Manager of Post Office Operations Area 5 Doyle Keith swore Shearer into the office.