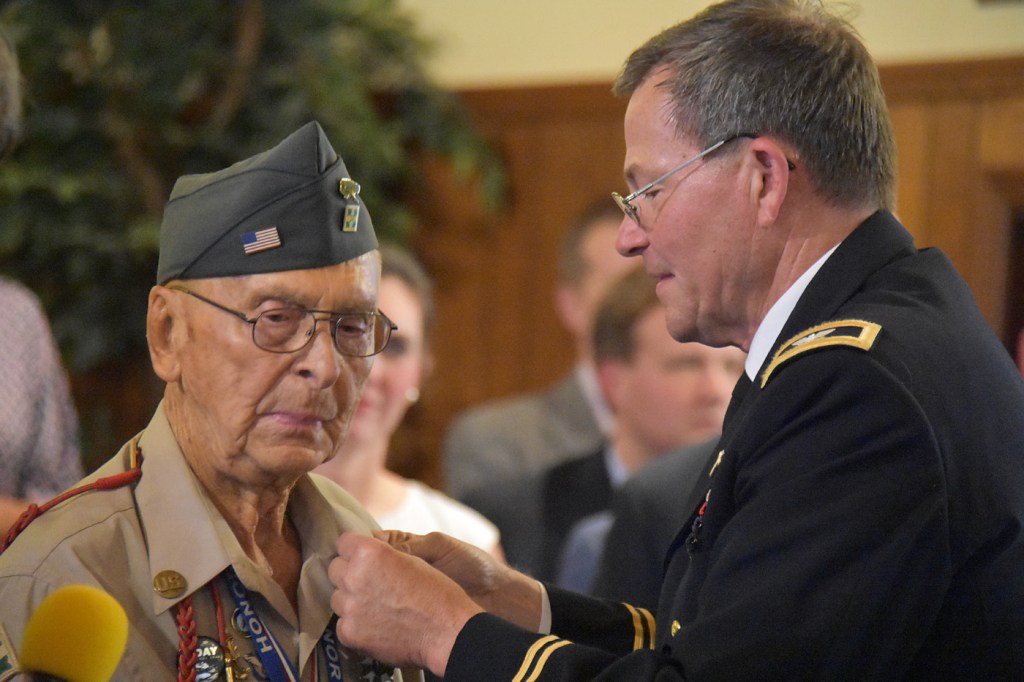 The Edgewood Baptist Church was near capacity last Thursday for a Military Honors Ceremony in which the Military Freedom Fest recognized its 6,000th area veteran.

Though many veterans from the region were recognized and thanked for their service by local elected officials—including Nicholasville Mayor Pete Sutherland, Nicholasville’s City Commissioners, magistrates of the Jessamine County Fiscal Court and Representative for the Commonwealth’s Sixth District Andy Barr and Representative for the House District 39 Russ Meyer — the largest honor of the night went to World War II veteran Charles Edward Wilson of Carlisle. Wilson was the 6,000th veteran to be honored by the Military Freedom Fest.

Wilson, 89, was 18 years of age when he registered for the draft to serve his country.

As a member of the U.S. 4th Division, he was a forward observer the first wave to land on Utah Beach to liberate Cherbourg, France. An injury that occurred during his second rotation left him paralyzed on the ground for fifteen days with what he later learned was a broken back.

Wilson then took over as a tank driver for a soldier who lost his legs to a land mine. A second serious injury from artillery fire left Wilson in a state where an unknown soldier was to find him half-buried, unconscious and bleeding.

Despite his injuries and hardships, Wilson helped free Paris on his 19th birthday in August of 1944 and went on to help locate the Dachau concentration camp in 1945.

Wilson returned to Kentucky to receive his high school diploma, attend Eastern Kentucky University on the G.I. Bill, earn a degree in industrial arts and education and teach until 1979 before retiring as a principal. He has since returned to France three times, and was invited by the country’s government to help celebrate over seven decades of freedom.

Wilson, a two-time Purple Heart recipient, was awarded the French Legion of Honor medal — France’s highest order of merit for military and civil merit — in 2015. He is the third area veteran recognized with the honor by the Military Freedom Fest.

“God bless you for your service and honor,” Chaplain Col. Dewayne Brewer said to Wilson after pinning him with his French Legion of Honor.

Wilson was also presented with a Purple Heart plaque and coin, a Commonwealth Ambassador appointment by Secretary of State Alison Lundergan Grimes, a key to the city of Carlisle, an honor from the State Senate, an honorary citizenship and key to the city of Nicholasville, a gold-seal letter from Sen. Mitch McConnell, a certificate from the county business community, a proclamation from the Jessamine County Fiscal Court declaring Aug. 10, 2017 to be Charles Edward Wilson Day in the county and a letter from the government of France that was translated and read aloud.

Finally, he was given a French flag that was flown in his honor.

“Our nation is so very fortunate to have so many veterans who have served their country and stood up to defend the freedoms of the American people,” Rep. Barr said of the veterans in attendance.