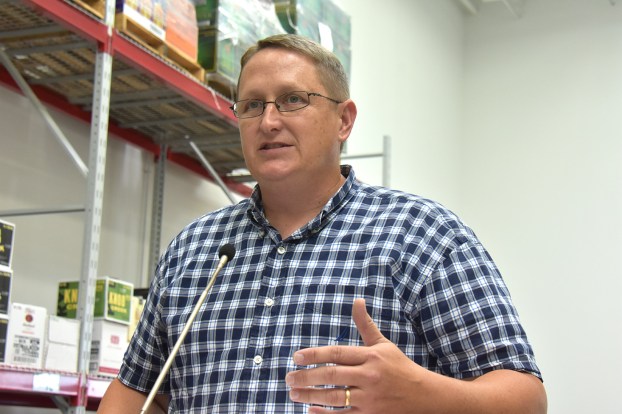 As far as City Engineer Tim Cross is concerned there is a lot going on in Nicholasville.

The Jessamine County Chamber of Commerce held its monthly luncheon Tuesday afternoon, and recently appointed Cross, gave the audience an update on several projects in the area.

Cross explained that the city recently made engineering its own department, whereas it had in the past fallen under planning and zoning. The engineering department’s chief duty is to review the plans for city infrastructure, including roads, streets, waterlines and sewer lines. Cross said his new department is responsible for ensuring that their construction was correct.

Cross reminded everyone that Nicholasville is an MS4 — Municipal Separate Storm Sewer System — city, meaning that it must maintain a stormwater permit with the state. Storm sewers are a major topic for cities on both the state and national levels, he explained, due to the growing reach of the Environmental Protection Agency. He said that some of the measures that Nicholasville has taken as an MS4 city have included inspecting and mapping all of its stormwater system.

Other projects that have been done regarding stormwater awareness include the offering of a rain garden class, which will assist agriculture students at the Jessamine Career and Technology Center with constructing a rain garden near the soccer field.

Next, Cross talked about developments in the Brannon Crossing area. East Brannon Road development is now visible on Google Earth, he said, and East Brannon Road will soon connect to Tate’s Creek. Ashgrove Road will connect to East Brannon as opposed to Tate’s Creek. He said that construction on a 200-seat Asian restaurant is now underway by Hobby Lobby at Brannon Crossing, and the Bluegrass Hospitality Group has also purchased land and has been granted approval to build a new restaurant as well.

Cross said that The Avenue at Brannon Crossing apartment complex is full with a waiting list, and has been successful in attracting young professionals to the area. The planning for a new development at the corner of Ashgrove Pike and U.S. 27 is underway for a similar facility with 240 units. He said that the old house on the property will be kept as an office. In addition, the entrance to Bethel Harvest Church will become Bethel Harvest Way and be built all the way to Ashgrove.

Other discussions for housing development included the new homes being built in the Burley Ridge subdivision on Sulphur Well Pike, and how the West Place subdivision is being connected to Hoover.

Cross touched on the Eastern Bypass, which he said is scheduled to be bid in two months.

“The Transportation Cabinet will be meeting this month to pool the funds for construction,” Cross explained. “The city of Nicholasville has advertised and had our first pre-bid meeting for the utility relocation on that project, so we are moving ahead. We will begin to relocate the utilities in the route of that first section, which goes from the south end of the bypass down by Hoover over to Sulphur Well. They are purchasing right of way and clearing it as we speak.”

Cross also talked about the Transportation Cabinet’s SHIFT — Strategic Highway Investment Formula for Tomorrow—program, and how Jessamine County is part of the Lexington Metropolitan Planning Organization. Four projects in the county have been approved. One particular project is the North Third Street bridge, which is being surveyed by the state. He said that $500,000 for design has been approved by the state, and $1.5 million has been allotted for reconstruction.

“We have to have sidewalks, and that is what we are going to push for,” Cross said of the project.

Another proposed highway project that Cross discussed was the U.S. 27 Access Management Plan.

Under this plan, the state would re-design the highway from the north end of the bypass to Man O’ War Boulevard to be similar to New Circle Road, complete with concrete barriers, U-turns and centralized traffic signals. Although Cross said that he is not a big fan of the plan because it rushes traffic through Jessamine County and into Lexington, he feels that fewer traffic stops would help with safety on the highway.

The final topic Cross discussed at the luncheon was the downtown performance park, on which ground will break this week. The park, which began as a section of land the city purchased off of Main Street, will be paved and outfitted with seating and space for downtown activities and entertainment.

“We have been through the ringer trying to get that funded and approved,” Cross said. “We are very excited to get that going.”