Peel recognized as an Everyday Hero 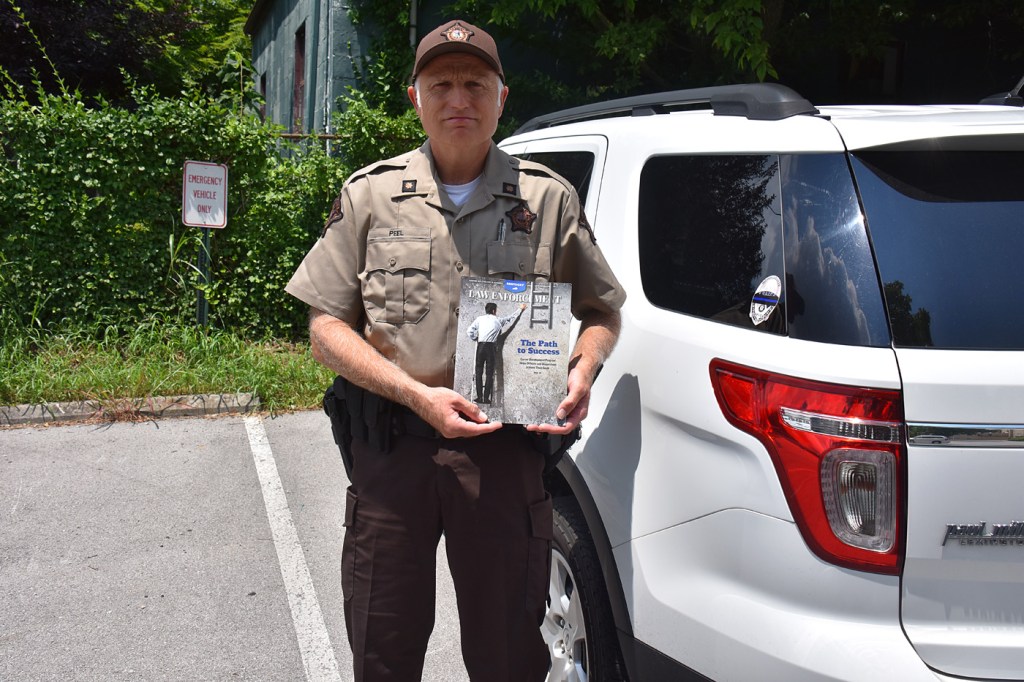 “I was humbled and honored and all that,” Peel said about being featured in the magazine. “That’s something that I can always look back on when I retire, that I was in KLEC Magazine.”

The quarterly publication created by the Kentucky Justice and Public Safety Cabinet covers multiple hot-topic issues across the state.

Changes which “Doodle” Peel has seen and participated in during his almost 30-year career serving Jessamine County.

Peel received his nickname, “Doodle,” from his mother when he was a baby because she said he looked like a doodlebug.

Peel graduated high school in 1978. He spent the next 10 years trying to figure out what he wanted to do in life. For a decade, he sampled a little bit of everything from farming to factory work. In September 1988, Peel was contacted by a former sheriff, who eventually talked him into joining the law enforcement profession.

Peel graduated from the Sheriff’s Academy at Western Kentucky University in 1991.

He has continued to serve the community he loves through various roles at the Jessamine County Sheriff’s Office such as serving papers, answering phones, conducting traffic stops, and murder investigations. He was given the title chief deputy in 2007 after Sheriff Keven Corman was elected.

Peel said when he started, there were only two police cruisers and four deputies at the Jessamine County Sheriff’s Office, now there are 32 sworn deputies and 29 vehicles in the fleet.

In the interview for the magazine, Peel talked about the best, worst and most interesting days on the job.

He told the interview his worst day on the job was November 13, 2001, the day that former Capt. Chuck Morgan and Deputy Billy Ray Walls were shot and killed while another deputy, Sammy Brown, was wounded serving a terroristic threatening warrant on River Road. He described that day as “mind-numbing.”

He also reminisced about being on a murder scene five minutes before it happened 25 years ago.

He said he was replying to an alarm drop call at a store.

He recalled a man putting air in his tires and an older man in the front yard of a house that sat behind the store.

He said he left the store after checking all the doors and windows and determining everything was fine and nothing was going on. A few minutes later, Sheriff at the time, Joe Walker, called him saying there was a shooting at the store he had just left.

The elderly man, who was 78 and had dementia, had shot the man who was putting air into his tires and took off in his pickup truck. The 78-year-old man died before he went to trial.

Peel speculated that he had become confused and enraged after assuming the man pumping air in his tires had laid phone books on his front porch. He described it as a senseless murder.

One of his more interesting arrests came in 2008 when an intoxicated Elvis impersonator came to a district courtroom. He said the arrest made it on the “World’s Dumbest Criminals” and national news.

Throughout the best and worst days, his favorite part of the job is helping people.

“To know that you did all you could and that you helped them get an outcome that’s satisfactory,” Peel said. “It’s not always possible, but to be able to help people. And that’s what over the years I’ve tried to pride myself in doing.”

It’s that willingness and drive to help others that has made, and will continue to make, Peel an everyday hero.

“Doodle is the definition of a public servant,” Corman said in a statement on Facebook. “It is his example and his leadership that makes it so easy for me to do my job.”

He said Peel fit all the qualities he wanted in a chief deputy and since day one, he has taken initiative on tasks such as administering the courts, patrol, court security and citizens complaints and concerns.

“I honestly couldn’t imagine a better fit for this article than him,” Corman said.