Patricia “Trish” Lovings Drury, 50, passed away at UK Medical Center on July 3, 2017. She was born in Lexington, Kentucky on August 19, 1966, to the late Romie Russell. Patricia was raised by her Father and Mother, Frankie Brinigar and Laura Jane Akins. She was the wife of John Drury. Patricia attended Woodford County High School. She spent her life as a homemaker and stay at home mom. She loved her daughter and grandchildren. Patricia and her husband enjoyed camping, and she used this time to take pictures of animals; she loved photography and animals. Her family said that she was a good cook and loved to cook. Patricia is survived by her husband, John Drury; daughter, Kayla Lovings Fenimore (Josh); father, Frankie Brinigar; brothers, Sonny Brinigar (Gina), Tim Russell and Billy Joe Russell; sister, Cindy Russell Francis; grandchildren, Malarie Fenimore, Jayce Fenimore and Aubrie Fenimore; nephews, Sonny and Dustin Brinigar, Dusty and Dylan Russell, Lucas Francis, Brian Stephens and Jake Daughtry; and nieces, Bonnie Russell and Morgan Young. She is preceded in death by her mother, Laura Jane Akins. Services will be held at Saffell House Funeral Home in Lawrenceburg on Friday, July 7, 2017, at 1 p.m., with interment following at Sandspring Cemetery in Lawrenceburg. Visitation will precede the service from 11 a.m. to 1 p.m. Pallbearers will be Josh Fenimore, Sonny Brinigar, Dustin Brinigar, Tim Russell, Joey Russell and Cindy Francis. In lieu of flowers, the family asks that donations be made to Saffell House Funeral Home to assist with the funeral expenses. Arrangements have been entrusted to the Saffell House Funeral Home.

William Allen Cartwright, 94, widower of Ruth, passed Sunday. Service will be held at 1:30 p.m. today at Porter Memorial Baptist Church. Visitation will be today at 11 a.m. until the service. Betts & West Funeral Home is honored to serve. 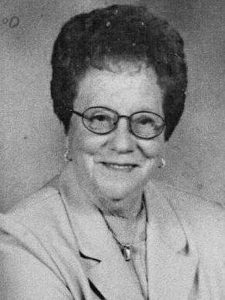 Marjorie McGuire, 85, of Hustonville, KY passed away on Monday, July 10, 2017 at Fort Logan Hospital in Stanford. Born February 11, 1932 in Danville to the late Roy Lowell Bryant and Eunice Johnson Bryant, she was the widow of the late Mike Moody. She worked as a homemaker for most of her life, loved her animals, and enjoyed gardening. She was also a member of Parksville Baptist Church. Survivors include her husband of 14 years, F. L. “Mack” McGuire of Hustonville; one son, Michael Warren of Nicholasville; four daughters, Pam Kramer (Tony) of Hustonville, Marilyn Elmore (Ricky) of Lancaster, Geraldine Royalty (Delmer) of Harrodsburg and Kathy Bodner (Harry) of Danville; thirteen grandchildren, seventeen great-grandchildren and one great-great-grandchild. In addition to her parents, she was preceded in death by a husband, Mike Moody; and three children, Gerald Dewayne Warren, Carolyn Warren, and Millard Stuart Warren. Visitation will be Thursday, July 13, 2017 at Spurlin Funeral Home Chapel in Stanford from 5 to 8 p.m. Funeral service will be at 1 p.m. on Friday, July 14, 2017 at the funeral home with interment following at Bellevue Cemetery in Danville. Casket bearers will be her grandchildren.

Hager & Cundiff Funeral Home will be having a Remembrance for Charles Ray Pierce, 75, widower of Beverly since 2011, on Thursday, July 13, at 11 a.m. Following his Service, he will be laid to rest in Maple Grove Cemetery. His children Tim, Jeannie, Charlene, Anthony, James and Joshua received friends at the funeral home on Wednesday.

Robin Louise Cobb Hasselbring, age 90, passed away on July 10, 2017, in Brentwood, TN. Survived by son, Edwin (Dana) Hasselbring; three daughters, Robin Kaye Hasselbring, Vivien (Dr. James) May and Laura (Jack) Eddleman; sisters, Phyllis (Ray) Bradshaw and Linda (Doug) Downing; brother, Gordon (Brenda) Cobb. She is the third child of Hubert and Thelma Cobb. Contributions may be given to Brentwood United Methodist Church or Nicholasville United Methodist Church in Louise’s honor. Visitation will be on Friday, July 14, 2017, from 12 p.m. to 2 p.m. at Hager and Cundiff Funeral Home in Nicholasville, KY, with a graveside service to follow at 2:30 p.m. at Maple Grove Cemetery. Hager & Cundiff is honored to serve the Hasselbring Family.

Louetta Hager Smith, 74, wife of John William Smith, died Monday, July 10, 2017. She was born on May 25, 1943 in Jessamine County, Kentucky to the late Eddie “Jog” and Vina Reynolds Hager. Lou was a hairdresser, a homemaker who loved to cook and sew. She especially loved the farm life. She was a member of the Mt. Lebanon United Methodist Church, the Jessamine County Beef Cattle Association, Southern States Advisory Board, the Jessamine County Fair Board, the Jessamine County FFA Alumni Association and the Kentucky State Board of Hairdressers & Cosmetologist. Additional survivors include a son, Jonathan H. Smith and his wife, Alissa and two granddaughters, Remie Lee and Bracie Lou Smith; two sisters, Esther Neal Davis and Anna “Twinkie” Floyd and her husband Billy; and a brother, George A. Hager and numerous other family members. She was preceded in death by two brothers, Roscoe and Wallace Hager; a nephew, Neal Floyd and brother-in-laws, Ray Davis and Rawhide Frazior. Funeral services will be 11 a.m. on Friday at Betts & West Funeral Home with Pastor Michael Canada officiating. Interment will be in the Maple Grove Cemetery. Bearers will be Johnny Hager, O’Neil Hager, Dave Stinnett, Kevin Corman, Russ Meyer, Greg Hobson and Dale Cuzick. Visitation will be Thursday from 3 to 8 p.m. at the funeral home. The family would like to thank Dr. Elvis Donaldson and his staff for the special care given to Louetta for the last eight years.