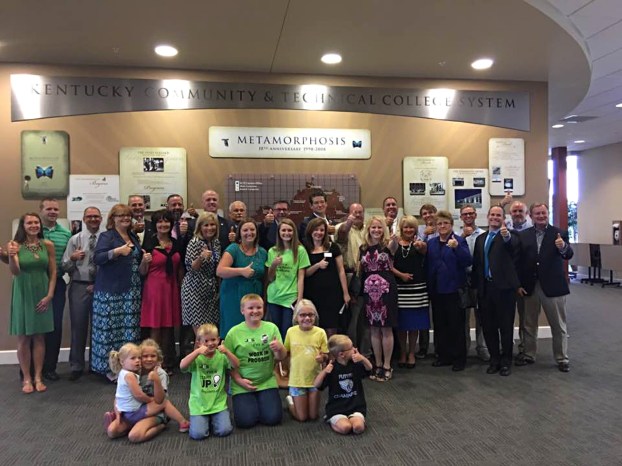 Many community members and officials made the trip to Frankfort on Tuesday to present a formal 10-minute presentation to the Work Ready Communities Panel after a year of preparation. That hard work paid off when the panel made the official recommendation for the county to become publicly recognized as a Work Ready Community.

“Our graduation rate has improved about four and a half percent, which is huge, so were well over the benchmark that was necessary to get this designation,” Director of Adult Education Mary Newton said.

By the time the presentation was made in Frankfort this week, the application for the accreditation, which contained over 100 pages, had already been completed and submitted.

Normally, there are several phases to the process such as a letter of intent, a formation period, work ready in progress and then the final designation of Work Ready.

“We went straight from the letter of intent to fully certified as Work Ready because our application package was complete at the time that we sent it in.”

To increase the county’s eligibility for the accreditation, subcommittees had to work on specific narratives such as graduation and emphasizing the National Career Readiness Certificate (NCRC), which provides work-readiness ratings in the three areas assessed by the ACT WorkKeys: reading and information, locating information and applied mathematics. The NCRC is a tool that allows hiring managers to gauge the employability of job applicants.

Other factors that were considered for eligibility were community commitment, the number of community members in the county possessing a two-year degree or higher and the number with high school diplomas or equivalency, as well as what is being done to accommodate soft skills development and internet availability within the community.

Newton, Assistant Superintendent and Chief of Staff Matt Moore, Nicholasville Mayor Pete Sutherland and County Judge Executive David West highlighted items in the package and described how the process brought the community together.

Among the thirty community members who made the trip, were Nicholasville commissioners, Jessamine County magistrates, interim superintendent Val Gallutia, Nicholasville’s chief of police Barry Waldrop, both state representatives Kim King (R) and Russ Meyer (D) and plenty of students from all grades.

“We just wanted to show them how behind this project the community was,” Newton said. “And they loved that and made special mention of that.”

She said the Work Ready accreditation is huge for the community because it has the opportunity to attract new businesses with the knowledge that a workforce is in place and ready with the academic skills and soft skills needed to perform job duties.

“In our school system we teach things like showing up on time and we teach things about being able to get along with others,” Newton said. “Not just your academic skills, but also those things that are intangible that are so important, and frankly so lacking in a lot of employees today, that’s something that we’re really working on.”

In the end, it was a matter of getting all the stakeholders on board, varying from government, schools and business leaders, as well as community members.

“It’s a wonderful feeling,” Newton said. “Just to be part of such a team effort really brought our community together.”

Though it is safe to say that Jessamine County is a Work Ready Community, the Kentucky Work Force Innovation Board will not publicly recognize the accreditation until it the board meets on August 17.