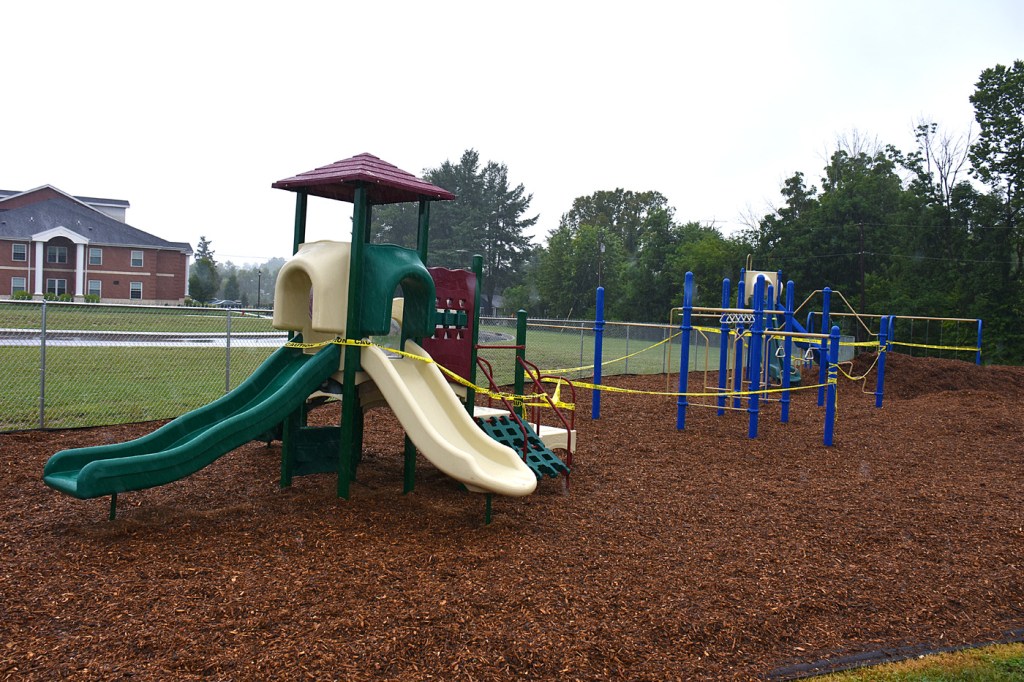 The younger visitors of Sims Ballpark in Wilmore will now have a new place to find entertainment.

The over 70 year-old-park located on Pleasantview Street recently received a new addition in the form of a playground complete with slides, swings, a toddler play-education area, four square, ten spin and a fitness unit, all of which are surrounded by a chain link fence.

The new equipment was installed on Saturday, June 17 and the layout of the playground is expected to be finished by the end of July.

The proposal to revamp the old baseball field by adding on a playground was proposed by members of the Sims family at a Wilmore City Council meeting three years ago.

Director of Community Development Judy Woolums said the previous playground had been dismantled in 2011 after the council joined in talks with Asbury Theological Seminary about the school obtaining the land the field sits on. In return, the institution would relocate the ballpark to Centennial Park.

However, in 2013, seminary president Timothy Tennent delivered a letter addressed to Mayor Harold Rainwater stating that the school was pulling out of the deal because they had become aware that “quite a few” Wilmore residents preferred to keep the ballpark at its current location, according to an article in a September 2014, issue of The Jessamine Journal.

The Sims Ballpark and Playgrounds Committee was formed in July of 2014 and the Wilmore City Council approved their proposal to add the new park in September of 2014.

By the time the proposal was approved, the old equipment had sat idle for a few years.

“We had to start over again because the equipment was so outdated by that point and in such bad disrepair,” Woolums said.

The location of the playground had to be changed as well because the original site was determined dangerous due to its close proximity to the street and the outfield of the ballpark. It was also too far away from parents on the bleachers watching the game.

The City and Asbury Seminary worked out a property transfer which allowed the new playground to be built next to the bleachers and the home plate, which was a much more secure area, Woolums said.

The place they chose is on the third base side of the field adjacent to the bleachers where parents will be sitting. It is also out of the way of the flight path of softballs.

After fixing the scoreboard at the park, the committee turned their sights to the new playground.

They worked diligently alongside the City of Wilmore, several local businesses and individuals in the community to raise over $22,000 to help make this project a reality.

Though the new playground is almost ready for game spectators to use, it is not finished yet.

“One of the things we’re hoping to do in the future is to work with the Wilmore Elementary School and their art instructor to have children paint outdoor mural panels to decorate that chain link fence with,” Woolums said. “That will take away that industrial look of it,” Woolums said.

Larry Sims, a member of the family the ballpark is named after, has many memories of long summer days on the field.

“It was in my back yard essentially, so every night was playing ball,” he said.

Sims recalled one season when he was in college he helped manage and take care of the field.

“That was enjoyable, to actually manicure the field, make it playable, make it pretty and just officiating games, that was probably as much fun as playing,” he said.

Nowadays, Sims is playing a role in the construction of the new park, and he looks forward to the other additions to come, including a half-court basketball court with additional fundraising.