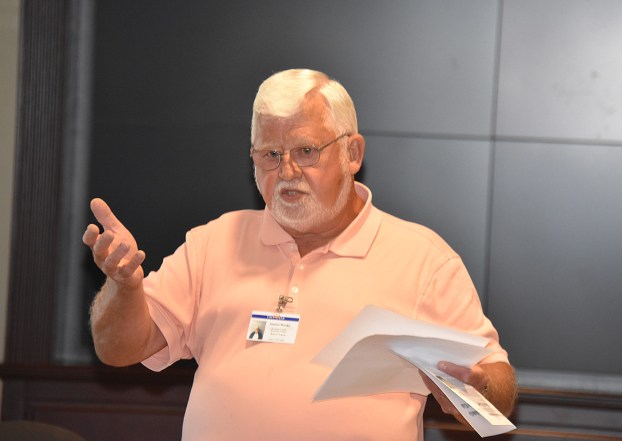 The Resilience For The Inward Journey program was initiated in the Jessamine County Detention Center on February 6 to help inmates with drug addictions and dependencies determine and combat the issues that are the roots of their substance abuse. Now, a new dimension of the program has been initiated to help those affected the most by the addicts’ behaviors.

Maurice “Moe” Mercier, co-founder and director of the Resilience program who implemented it and oversaw its development in Fayette County before bringing it to Jessamine, recently spoke about the program to the Nicholasville Rotary Club. He talked about seeing the young men and women who are struggling through the detox process while incarcerated.

“You stop and you see them and you think ‘man, life is being wasted here’,” Mercier said. “There’s some real issues and some real suffering going on.” The Resilience For The Inward Journey Program tries to respond to that problem, he said.

The new Resilience community support group was created to help parents or family members who are suffering through addiction with a relative, or individuals who lost a loved one to a drug overdose.

Both programs are responses to those who attended the Agency For Substance Abuse and Policy (ASAP) meeting for the state. From that program, and with assistance from the Jessamine County Health Department, a small amount of funding was attained for the Resilience program.

Mercier said that the program is still currently in “start-up mode”, and he hopes to see it taken over by others who will grow it upon his retirement.

The program consists of twelve lessons—or components—Mercier explained. Each lesson requires evidence to be shown that the addict is actively trying to apply the changes to their life.

“Everyone in this program volunteers to be in this program,” Mercier said. “It is not court-demanded. That makes a big difference, because you cannot change another human being. I don’t take anyone unless they show me that they have a desire to want to change, and they have to show evidence on an ongoing basis of how they are going to make those changes.”

Mercier said that there are currently eight participants in the Resilience program in Jessamine County. Three inmates recently graduated from the twelve-week program. See the article “JCDC inmates graduate from Resilience program” in the May 25, 2017, issue of the Jessamine Journal for more information.

Since the actions of addicts also affect those close to them, an important new element of the program is the community support group. Joining Mercier to speak at the meeting was his long-time acquaintance Rad Combs of Nicholasville, whose life has been greatly impacted over the past four years by his son’s struggle with addiction.

“I’ve got a 24-year-old son who is an addict,” Combs said. “He’s been in a couple of rehabs, and what we have been through as a family with the highs and lows has been an unbelievable roller coaster.” He said that he has learned a great deal about drugs and addiction, and now sees many similarities between addicts and non-addicts.

“When you are talking with addicts, the stories are all the same,” Combs explained. “And the family stories are close to the same as well.”

Combs illustrated how in the current drug epidemic, the old stereotypes of addicts no longer apply, using his son as an example of someone who had love, support and a good home, but still turned to drugs.

“The drug, or whatever the addiction is, is a symptom of the problem,” Combs said. “The problem is usually something internal to that person. The problem is bigger, that’s [the drugs] just how they go about dealing with it.” He said that to a rational person, the reasons and justifications that an addict gives make no sense.

The most devastating aspect of having a loved one who was an addict, according to Combs, was never knowing when the next—and potentially final—overdose was going to come. And no cure or program carries a guarantee to permanently erase the problem.

“This is an excellent program, but there is no silver bullet and everybody’s different,” Combs said. “That’s what makes this so difficult, because what works for some will not work for others.”

Speaking as a parent, he said that the initial emotions felt when discovering that a loved one is battling addiction are embarrassment and hurt, which turn to anger. Their own journey through this range of feelings led Combs and his wife to agree to help Mercier create a support group for families of addicts.

Combs said that the community support group is for anyone with a loved one who is an addict, because the process that those individuals go through is helped when they have someone to talk to who has shared the same emotions and experiences. Mercier is the program’s facilitator, and some of the former addicts who have graduated from the Resilience program assist.

“This process, program the aftercare and even the support group—it takes all of that to get through a hell like this,” Combs said. Through the program, Combs said that he and his wife have learned that though they can love and support their son all they can, his recovery is all on him as they can’t make the decision for him.

And that is something only others with addicts as loved ones easily understand, which is why he believes as he does in the program that he is part of.

The community support group meets every other Tuesday at the Jessamine County Public Library from 6:30 p.m. to 8:00 p.m. Anyone with a loved one struggling with substance addiction is welcome to attend and share.

At any given time of day, visitors of the Brannon Crossing Shopping Center in Nicholasville can see cars pulling into... read more