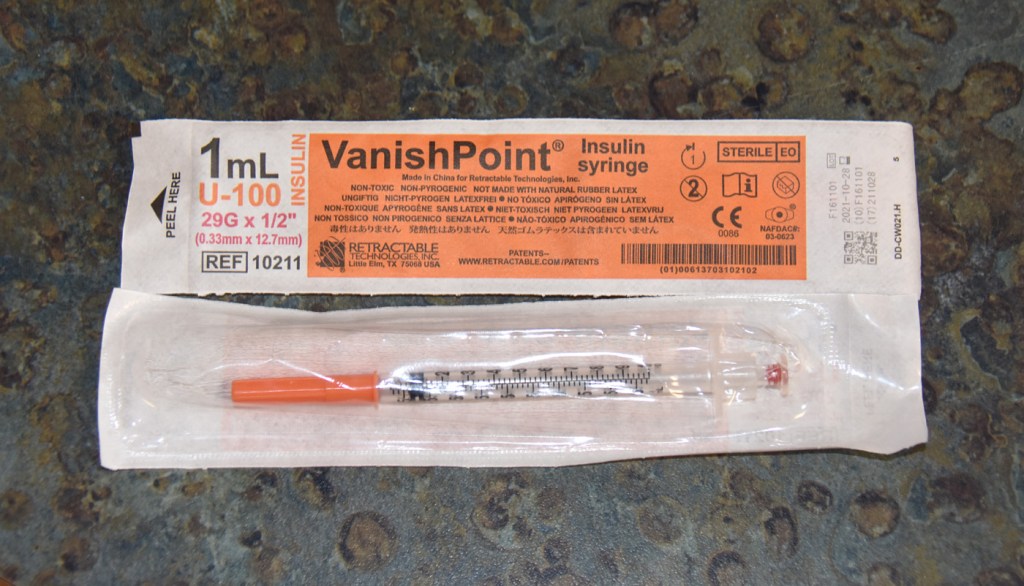 Gooch said that he presented the idea for the program to the city and the county in January of 2016, and was granted approval from both bodies, as well as the Board of Health. The program marked its first actual year of operation in April of this year. During its first year, 396 encounters were recorded.

“That is relevant to serving 127 unduplicated clients,” Gooch explained. “That means that 61 of those clients returned more than one time to the exchange program at a 46 percent return rate.”

Gooch said that the rate fell in line the first year of a similar program in Louisville, and thus with expectations for Jessamine County.

To date, 63 males and 64 females have utilized the service, splitting the gender ratio nearly in half. The youngest participant has been 23, with the eldest being 66 years of age. The average age of users has been 35. The age results come as a surprise to some in the community.

“People are surprised when they hear the fact that most drug overdose related deaths come within the age group of 45 to 54,” Gooch told the fiscal court Tuesday afternoon.

In addition, for those 396 encounters, 13,035 syringes have been out in exchange for 9,349 taken in for a distribution ratio of 1.39. Gooch said that everyone would like to see that ratio go down. He attributed those numbers to the fact that a participant’s first visit to the exchange is a needs-based visit.

“The way we operate the program is the first visit that they come in, we give them up to 40 [syringes] based upon their need,’ Gooch explained. “Then it goes to a one-to-one exchange after that initial visit. I think that’s why we see that we have that 46 percent return rate.”

The syringes that are given out in the program are retractable syringes, it was pointed out, so that if they are disposed of improperly and are laying on the ground, the syringes are retracted. This attribute lessens the risk of unintentional contact with a used needle.

He said that one feature that everyone wanted to provide at the center was on-site counseling. In its first year, seven individuals were counseled on-site for a six percent rate, which was the same rate that was recorded in Louisville. Twenty-two were actually referred to counseling, which was 20 percent of the clients referred to counseling in 2015. The referral program has been successful for those who would rather seek the service in another county due to anonymity and their job or standing in the community, or those who have a waiting ride.

“What we see is that when these folks come in to be served by the syringe exchange program, they are a little timid and a little untrusting,” Gooch said. “They want to get in and get out as fast as they can. That’s when we refer them and try to get them help outside.”

Due to that challenge, Gooch said that they offer a certified drug and alcohol counselor on site to be available. The counselor is involved in the intake process as one of the first points of contact new program entrees encounter as a means to make the introduction early.

Also reviewed was the results of the self-reporting of testing campaign that the program has been utilizing. Gooch said that 96 participants reported that they had already been tested for hepatitis C, 33 of which tested positive and eight of those were already being treated for the liver infection. For the HIV virus, 92 participants self-reported being tested with no positive results.

Gooch said that controlling the infectious disease rates was the type of success that the program was looking for. Dealing with rampant spread of the diseases carries a high cost, and it is a dangerous risk for the community at large. Especially officers of the law, first responders, and medical personnel who have first-hand interactions.

He explained that the last Center For Disease Control and Prevention report showed that Kentucky has 54 counties that are marked as risks for the hepatitis C and HIV outbreak. Though Jessamine County is not one of those counties, it is a problem that must be monitored closely in light of the county’s heroin epidemic.

Other programs being used to address the heroin epidemic and subsequent syringe issue discussed included the Safe Communities Substance Abuse program, the ASAP (Agency for Substance Abuse Policy) program and the Resilience For The Inward Journey detention center program. The latter program is based on a similar and successful program from Fayette County. Three participants have graduated so far from all twelve sessions, and there are currently six individuals in the process.

“We are in hopes of taking about thirty through the program each year,” Gooch said.

In addition, he pointed out the mobile pharmacy through the Department for Public Health that served 36 individuals earlier this spring with Narcan doses for overdose reversal. Gooch commended the Nicholasville Police Department for allowing its officers to carry doses of the drug for their own safety.

“It’s made a huge impact, honestly,” Major Chris Cain of the Nicholasville Police Department told the mayor and city commission. “A lot of folks and young officers thought this was enabling, but the old way [of dealing with the drug problem] doesn’t work. This is the only way it is going to impact and help.”

Gooch told both governing bodies this week that he believed that if the program saved one life, it was a success. Accompanying him at both meetings was 35-year-old Tisha Thomas, who was the first participant in the exchange program. She used the exchange eight times before entering rehab and cleaning herself of her heroin habit.

“This syringe exchange program is not going to save the world with this epidemic,” Gooch said. “But it’s an intervention that we can do that is going to make a difference, I think. All of these folks working together is what it’s going to take to affect this epidemic we are dealing with.”