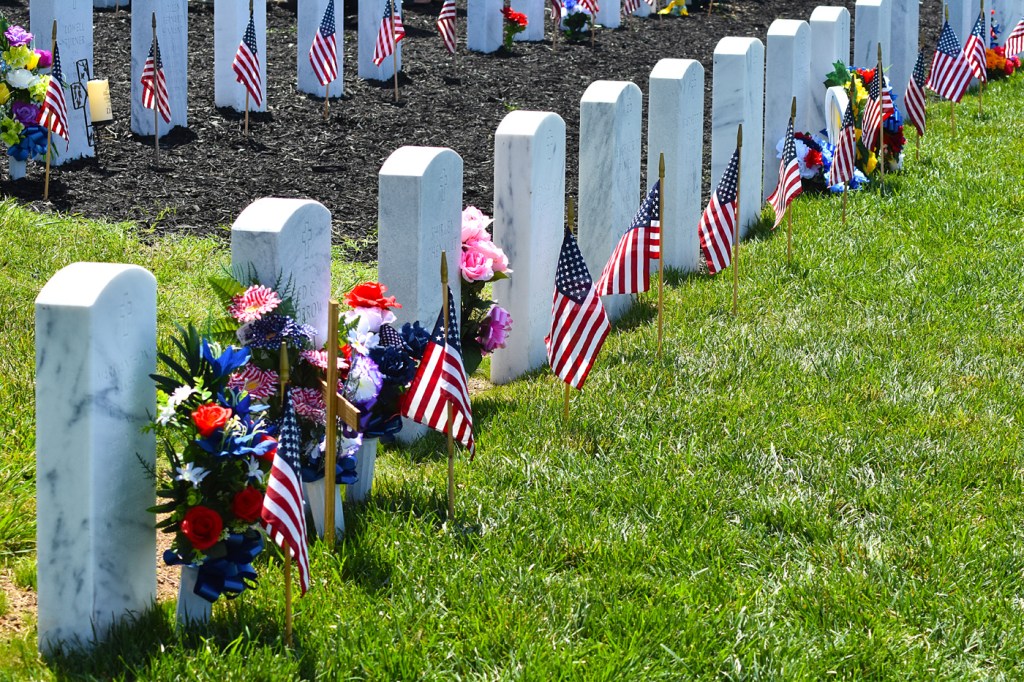 The morning couldn’t have been brighter for enjoying an outdoor event in southern Jessamine County Monday morning. Nor could it have been more pleasant for the many in attendance for Camp Nelson’s Memorial Day celebration who parked their vehicles alongside U.S. 27 to attend the event.

The crowd was large and respectful as it filled the hallowed grounds of Camp Nelson National Cemetery to attend the ceremony, which featured a full customary tribute to all of those lost to military conflicts. 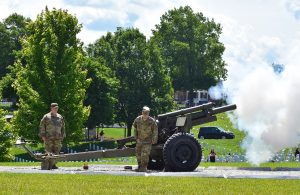 Nick McManus, Flotilla Commander with the U.S. Coast Guard Auxiliary and the Central Kentucky Veterans’ Committee Chairman, served as master of ceremonies, and the event featured a cannon salute by the Kentucky Army National Guard 138th Field Artillery Brigade from Lexington and a rifle salute and presentation of colors by the American Legion Post No. 18.

Musical tributes at the event included performances of patriotic anthems and the Armed Forces medley by the West Jessamine High School Band under the direction of Patrick Van Arsdale. Vocalists Beth Furr and Kelley Casey delivered stirring renditions of “America The Beautiful” and “The Star Spangled Banner” respectively. In addition, Michael Preacely sang “The Battle Hymn of the Republic” and The Diggles Family Ministries performed “Amazing Grace.”

The flyover featured the C-130 Hercules aircraft, said to have been the “wings of freedom” of many of the veterans in attendance. The flyover was courtesy of the 123rd Airlift Wing of the Kentucky International Guard out of Louisville, who provided aerial support during Operation Iraqi Freedom in 2003 and in Afghanistan in 2007 and 2009-2011. The plane, like all of the planes named by the 123rd, was christened after a Kentucky Derby winner—“Foolish Pleasure”.

Chaplain Dean Cook, Captain, U.S. Navy (Ret.) was the guest speaker at this year’s event. Cook, who served in uniform for 33 years, spoke to the crowd about the pride in which soldiers serve their country, and the debt of gratitude they are owed yet sometimes do not receive. Cook was presented with a plaque for his service after his speech. 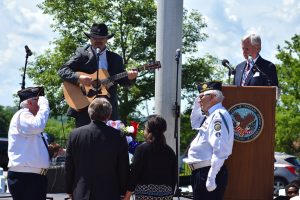 The Placing of the Memorial Wreath was carried out by Rick and Nancy Pounds of Lexington in honor of their late son-in-law, Captain David Lyon of the U.S. Air Force. Lyon was married to the Pounds’ daughter, Major Dana Pounds. Capt. Lyon was a member of the 21st Logistics Readiness Squadron deployed to train Afghan Special Forces. He was killed on Dec. 27, 2013, when a roadside IED struck his convoy. Cant. Lyon was posthumously honored with a Bronze Star, a Purple Heart, and the Air Force Combat Action medal.

At noon, the proceedings were paused for the raising of the American Flag to full mast. After a benediction by Ron Mounts, a U.S. Army Vietnam Veteran and Pastor from Nicholasville and a remembrance by Nick McManus, Skip Kraemer, CDR., American Legion Post 63 from Nicholasville closed the ceremony with a performance of “TAPS”.