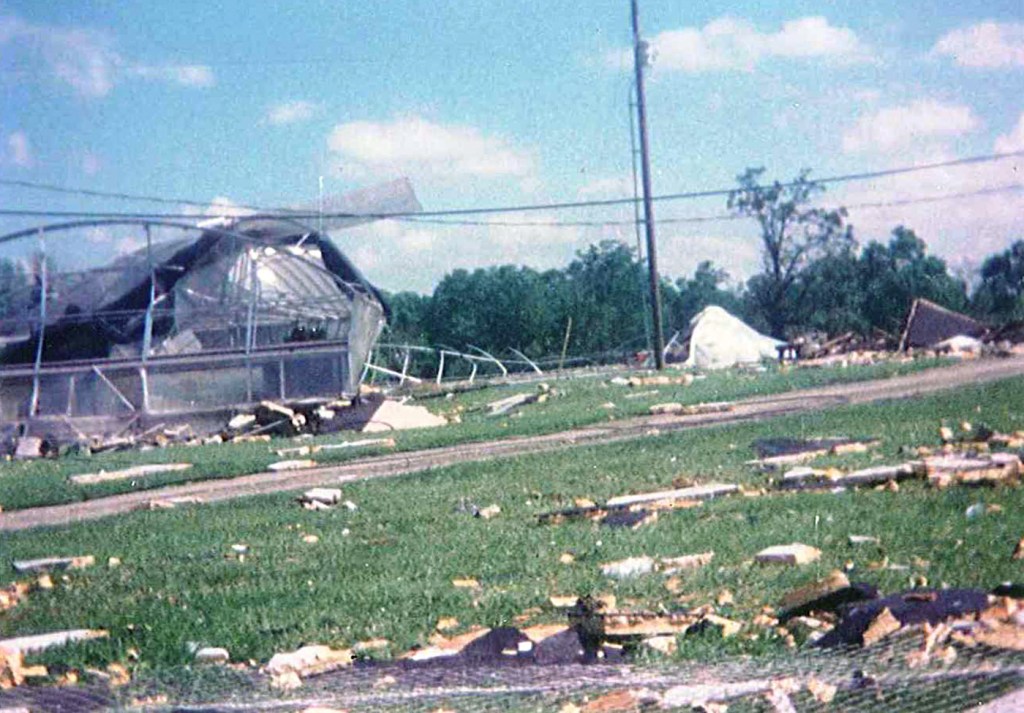 The National Weather Service has issued a preliminary report confirming that over a million dollars worth of damage in Jessamine County on May 18, 1995 was the cause of an F-2 tornado.

The storm was described as a “nightmare,” in an article titled “Storm ravages Jessamine County,” in the May 25, 1995 issue of The Jessamine Journal.

Around 7:40 a.m., a powerful wind ripped off the roof of Jessamine County High School — now West Jessamine High School — and smashed in the front wall near the main entrance. It was reported to The Jessamine Journal in 1995 by City Fire Chief, Charles Brumfield, that desks in one classroom near the entrance were covered in bricks that had fallen. During the commotion, many of the students were still on the buses, thanks to instructions from the principal at the time, Bob Korwatch.

Though many of the windows were blown out from debris coming from the roof of the school, Superintendent at the time, Larry Allen, said the kids were better off inside the vehicles because if they would have gotten off, they likely would have been killed.

“They would have been torn apart,” Allen was quoted in the May 25, 1995, issue of The Jessamine Journal.

The storm that turned the football stadium bleachers into a mangled metal ball also sent 24 people from the high school to the hospital for treatment, however, only a few them were seriously injured, according to a 1995 issue of The Jessamine Journal.

The estimated damages to the school were around $2 million dollars.

The high school was not the only place in Jessamine County to sustain damage from the storm. Businesses such as Central Kentucky Tire, Walmart and Humana’s medical center at orchard also endured some of the destruction. First Southern National Bank was also impacted by the damage that caused the bank to have to transfer around $74,000 to another location, according to a previous Jessamine Journal article.

Several cars, electric lines, and light poles that lined N. Main Street were also damaged, and just outside of Wilmore six horses were killed as a result of the weather.

Jessamine County Emergency Management Director Johnny Adams said he was a responder on the Wilmore Fire Department when the storm occurred.

“I remember that day adamantly because I had been out of Jessamine County High School one year almost to the day of that storm,” Adams said.

After the storm, Adams said he responded to several fallen trees and damage in the Wilmore area, and though he did not respond to calls in Nicholasville he did witness the destruction.

“Being in the position that I’m in now as emergency management director, it’s personal to me,” Adams said. “That’s why I take giving people advance warning in these types of situations seriously because I’ve seen destruction like this in the community before.”

The extensive damage was initially reported to have been caused by straight-line wind with speeds of around 100 miles per hour, which did not settle well with Adams or other members of the community. Adams said he had seen straight-line wind damage before and it was not to the scale that Jessamine County experienced on May 18, 1945.

“This was much more than that,” he said.

Adams said he witnessed the dark cloud and the flying debris just minutes before the storm hit the high school. He said the reclassification does give a piece of mind to all the people who lived that day and saw the storm for what it really was.

“To me, it’s doing nothing more than setting the record straight,” Adams said. “So many people in this community witnessed a tornado.”

Meteorologist-in-charge of National Oceanic and Atmospheric Administration’s (NOAA) National Weather Service Forecast office in Louisville John Gordon, was prompted to look into the previous classification after speaking at a Nicholasville Rotary Club meeting in the fall of 2016.

Gordon said he was bombarded with questions about the storm, so he told the community he would look into it.

After examining old radar data, news records, eyewitness accounts, pictures of the damage and archived weather data for a total of around 12 to 15 hours, Gordon said it was pretty clear to him that it was an F-2 tornado.

“It’s a miracle that no kids died at that high school, a miracle,” Gordon said. “It’s unbelievable how lucky it turned out to be.”

Gordon said the research will not stop there. There were also reports of similar weather in Mercer, Clark and Fayette Counties. He said he now has to figure out if those tornado sightings are connected to the one in Jessamine County. He said he would also like to figure out when the F-2 tornado in Jessamine touched down and when it ended.

“There’s still a lot of logistical and scientific things that need to be done,” Gordon said.

Gordon said he anticipates issuing a final report by June 30.