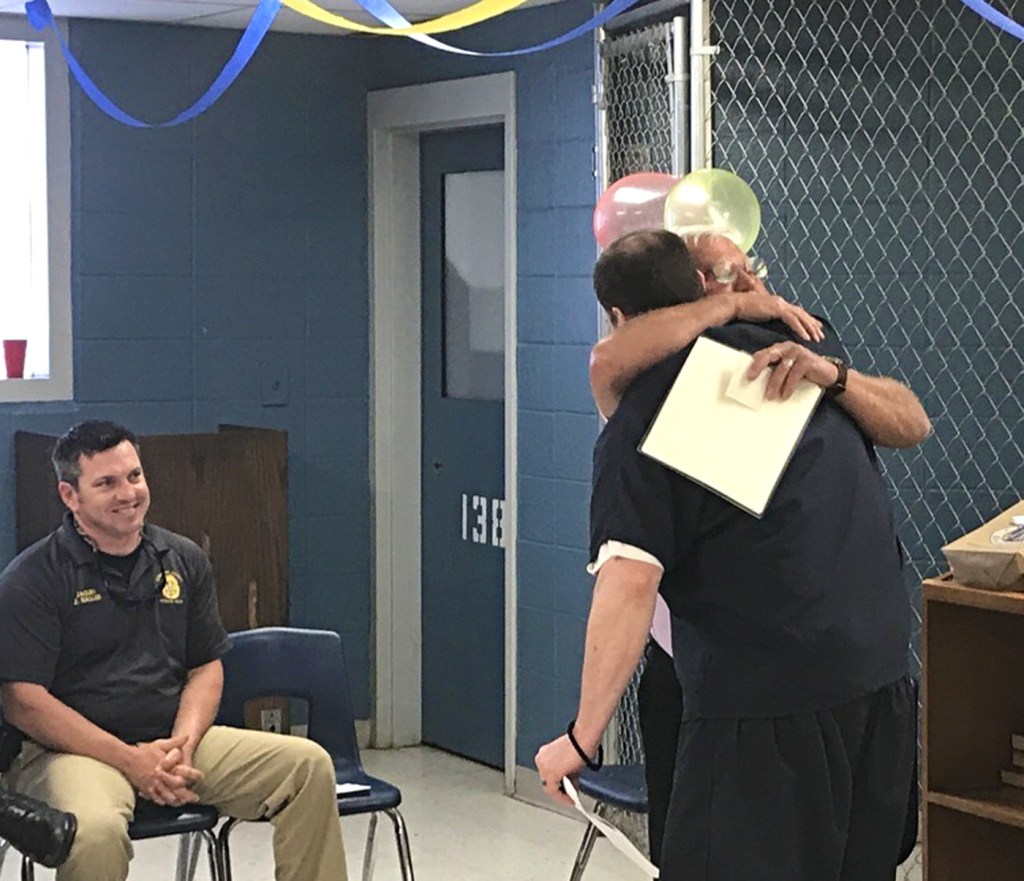 Inmates from the Jessamine County Detention Center recently celebrated graduating from a program designed to help them avoid being re-incarcerated for drug addiction.

“A large percentage of the inmates that are housed at the Jessamine County Detention Center are incarcerated because of drug-related offenses.” Jailer of JCDC Jon Sallee said. “From the time I took office as Jailer, it was easy to recognize that our community is facing a war against drugs, and as Jailer, I feel I have a responsibility  to the public to assist in the battle.”

Maurice Mercier — a human services consultant and “Resilience For The Inward Journey” program director who worked with the Fayette County Detention Center for around 10 years to help inmates battle addiction — approached Sallee in February of this year about starting the same program within JCDC so that those incarcerated could gain the tools necessary to keep them from entering the Detention Center again for the same offenses.

“I wanted a program that would put a stop to the revolving door of offenders that enter the jail,” Sallee said. “So we began researching to find a program that had a proven track record.”

The grant is used to pay for the tuition-based program, “Resilience For The Inward Journey,” which bills the jail a certain amount for each graduate.

The program is designed to counter the revolving-door aspect of addiction rehab systems. It was developed and validated over ten years in a non-violent, repeat-addictive offenders program in a county detention center. It incorporates a combination of psychology, positive psychology and spiritual growth from a non-creedal perspective.

The program is taught through a participant’s workbook and a leader’s manual, which was created by Paschal Baute, an Ed.D., psychologist who has 40 years of professionals experience in corrections, and Mercier. The workbook is the participant’s guide, and it consists of twelve lessons with worksheets for reflective completion and transitioning to a new way of life.

The leader’s guide includes the twelve lessons plus information for developing and guiding the individual participant.

On Wednesday, May 17, JCDC hosted their first graduation for the program. The three inmates who graduated completed the twelve-week program, but Sallee said their journey does not end there. They will continue to use the tools that they learned during the course as they continue through their recovery. More inmates have already taken the graduates place in the program and are expected to graduate as well soon.

“The program gives the inmates the tools they need so they don’t fall into the same patterns they did in the past when they are released,” Sallee said. “It gives them a new opportunity to go out and be a part of the community.”