Scheller’s awarded Key To The City 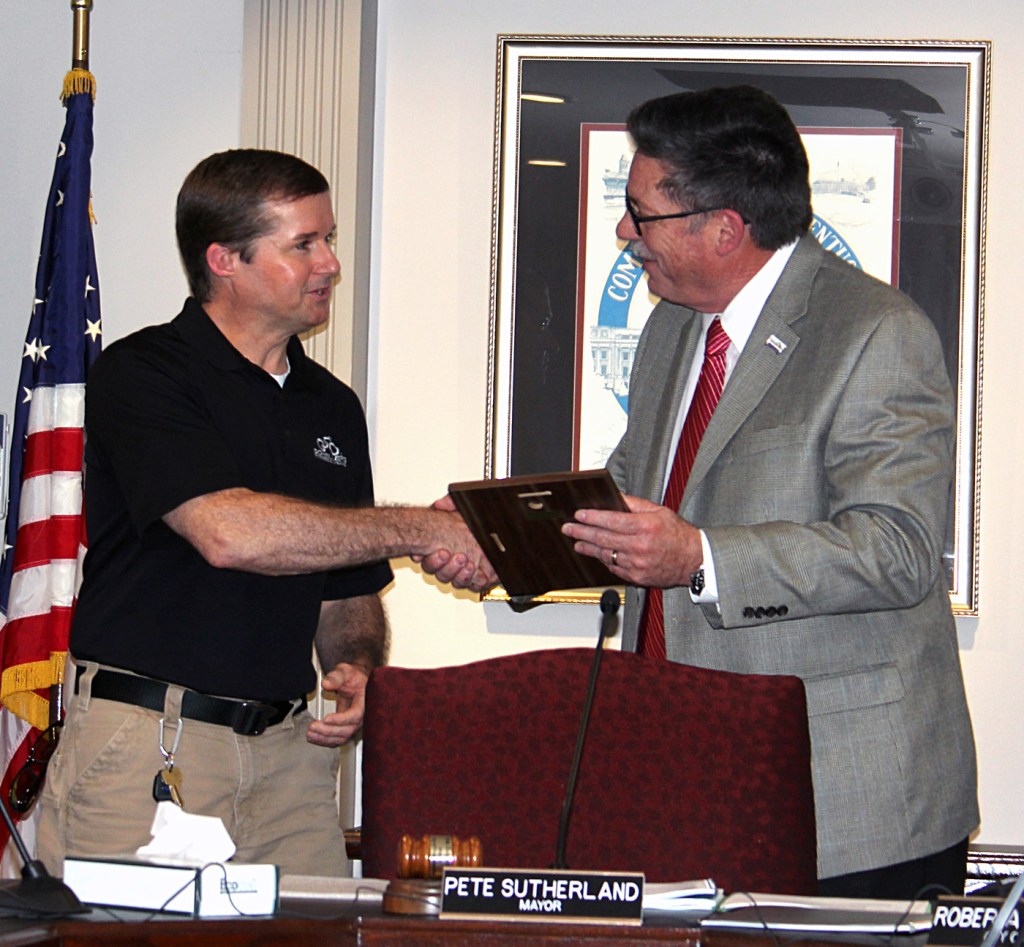 At Monday night’s City of Nicholasville meeting, Mayor Pete Sutherland recognized Scheller’s Fitness & Cycling with a Key to the City. Andy Lanier, the cycling manager at the Lexington Scheller’s store was in attendance to accept the award.

The recognition was given due to the Dero bicycle repair station that the company donated to the citizens of Nicholasville in April. The station allows for bicyclists to mount their bike onto it to conduct minor repairs. The repair station has been placed downtown for public use.

“It’s got tools built into it and a built-in pump,” Lanier told the Jessamine Journal. “So if you are riding around and notice that you are low on air, need an adjustment to your seat, or whatever you have the skills to do, it allows you to hang your bike on it and do it free of charge.”

The donation was given to the city as an effort to further promote bicycling in the region.

“We are reaching out and trying to give back,” Lanier said. “We’re trying to get more people out on bikes and get them active with access to basic repair necessities to make it easier on them. We are trying to promote cycling as best we can.”

Nicholasville’s Dero station is the seventh that the Louisville-based cycling shop has installed for a community in the region.

Avid bicyclist Libby Barnes was in attendance at the meeting at Mayor Sutherland’s invitation, and spoke to the Commissioners regarding cycling in Nicholasville and Jessamine County.

Barnes said that on Wednesday nights and often on weekends at their shop, they have members of a cycling group out of Lexington-based Bluegrass Cycling Club stop into cycle throughout Jessamine County on different routes.

“Yesterday, we had a variety of mileage from 72 up to 100, and we went through four different counties,” Barnes told the Commissioners. “The cyclists bring in a lot. It has a lot of benefits, and it helps in many ways.”

Barnes said that they were very grateful to the city for its involvement with the bike repair stand that has been installed in downtown Nicholasville. She provided a pamphlet that she picked up in another county that is used to promote their bicycling trails available as a tourism tactic for Nicholasville and Jessamine County to consider. For more of the story on Monday’s meeting, check out the online version at jessaminejournal.com.

Food, fun and plenty of wine to come