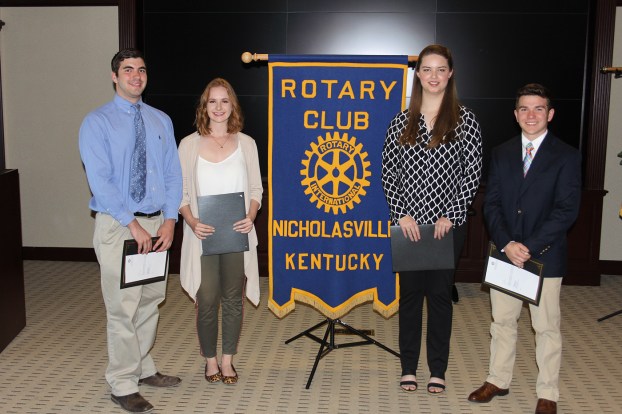 Once again, Nicholasville’s Rotary Club chose worthy graduating high school seniors from the area to be awarded scholarship money as they look to begin their college career. At Monday’s meeting, the four selected applicants were in attendance with their parents, and were recognized by the club.

Michael Hatton, son of Mike and Jennifer, is graduating from West Jessamine and planning to attend Western Kentucky University. Hatton said that he plans on working toward a degree in film.

Josiah Renner, son of Troy and Brenda, will be graduating from East Jessamine High School. Renner served as the 2016-2017 Jessamine County FFA President and the 2016-2017 Bluegrass Region FFA Sentinel. Renner said that he plans on attending the University of Kentucky to major in Agricultural Education.

This year, the Nicholasville Rotary Club awarded its first ever scholarship to a home-schooled senior. Sophia Sutherland, daughter of Phil and Johanna Sutherland, is a home-schooled student who has plans to attend the University of Kentucky’s nursing program. Sutherland volunteers at Baptist Health Hospital, helps out at her church and is a coach for her neighborhood swim team.

The fourth Rotary scholarship recipient announced for this year was Casey Kibler, daughter of David and Rachel. Kibler will graduate from East Jessamine High School, and plans to attend Hillsdale College in Michigan to major in marketing management and sports management before beginning law school. Kibler is involved with DECA and tennis, which she said she will continue in college.

Kibler received the largest annual scholarship that the Nicholasville Rotary Club offers—$1,500—which is offered in honor of the late Joe McMurtry. McMurtry was a lifelong Nicholasville resident who remained community-minded in both his personal and professional life.

“Joe was the best friend one could hope to have,” Nicholasville Rotary Club President Mark Maloney said. “He did so many things to not only help Rotary, but other great works in the community. More often than not, he remained anonymous and always kept a low profile.”

The other three scholarship recipients were awarded $1,000 each. The remaining sum of money that Rotary raised for the scholarships this year will go toward a new program that is being started to assist students who are already in college.

“The money will be used to fund a continued scholarship program for Rotary recipients already in college,” Maloney explained at the meeting.

Scheller’s awarded Key To The City