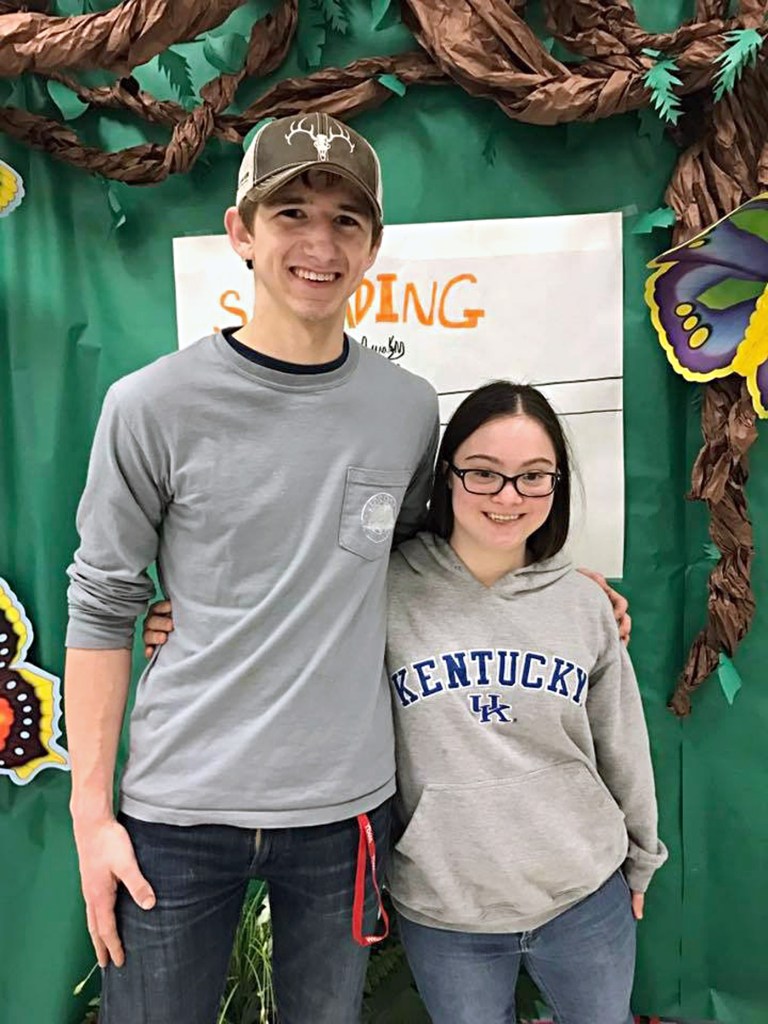 “Spreading Happiness” arose from an assignment in Corey Spalding’s awaken class. Students were tasked with creating a solution to the engagement problem within the schools.

“Students have just as much influence over each other as teachers do,” Spalding said.

This was the second year East and West Jessamine High School students have been given the assignment to create a social movement that would address a need in the school’s culture and community.

After studying various social movements, the 22-student class at West Jessamine High came up with the idea to give recognition to those who do not normally receive it, and to provide more extracurricular activities for students with special needs. They decided to create different social environments that would allow special needs students to interact with other classmates in and out of the school setting.

“The work they do in school is just as challenging to them as what we’re doing,” said Peyton Goble, a senior in the awaken class who is on the planning group for the movement.

The class came up with the concept at the beginning of the 2016-2017 school year. They hosted their first event last month in the West High cafeteria, where they were inspired to continue and grow the movement.

At the first game night, one of the students in attendance — who was known to have trouble communicating with others — opened up to some of the other attendees.

Goble said he and a few of his classmates walked around the outside of the school with the student to keep him company. The student’s mother, who had been watching from her car, was so moved by her son’s happiness that she asked to take a video of them walking around the building. That impact on a student’s life became the driving force to continue the movement, Goble said.

“That just really touched our class as a whole,” he said. “And it really encouraged us.”

They hosted their second event on March 24.

Despite the weather, Goble said the event went well.

The class provided various games such as cornhole for those in attendance. They also grilled out and provided snacks.

“It’s very relaxed,” Goble said. “They can come and do their own thing, we’re just there to make sure everything goes smoothly.”

Goble said the Friday night “Spreading Happiness” events are something his class is hoping will outlast their attendance at the school.

There is also a group in the class intend to ensure that younger and incoming classmates are informed about the social movement and are encouraged to continue it.

The financial group in the class is also working hard to help the movement get off the ground.

Each Friday for the past four weeks, the group has set up a coffee cart at the high school, where they sell hot chocolate, coffee, and donuts.

The coffee cart, after expenses, has raised around $40 to $50 a week. That money is used to buy items such as games and snacks for the “Spreading Happiness” events.

The class’s idea has caught the attention of Lord’s Legacy Life — an organization that promotes programs that are person-centered and results-oriented for individuals with intellectual or developmental disabilities.

Goble said he hopes the movement will be able to partner with Lord’s Legacy Life and coordinate times when the special needs adults can come and interact with students on game nights. He said he will be working with the organization over the summer and it may be put into place next year.

Eventually, Goble said the class hopes that “Spreading Happiness” will spread throughout the community and into the other schools.

“I’m really excited about the direction it’s going in,” Spalding said. “The thing that I enjoy most about getting to teach this class is seeing the students figure out how they can work together.”

East Jessamine High is also doing a social movement, “Prep for Pep,” to improve the culture and increase morale at the school by making daily announcements more engaging and highlighting different games and events at the school.