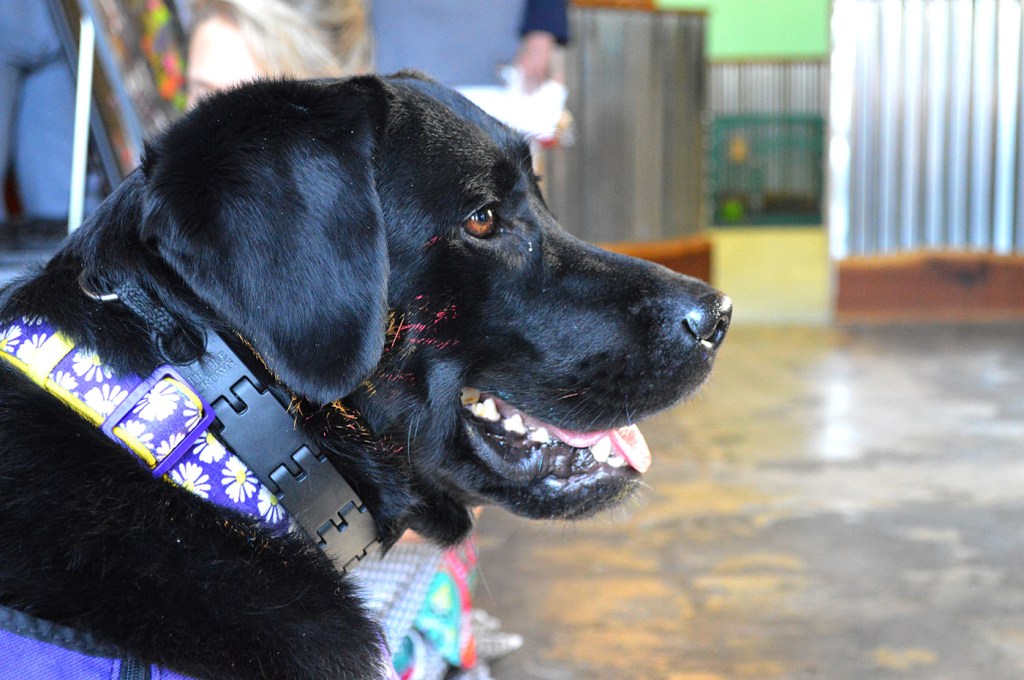 Many participants in the gallery walk on Friday watched in amusement as one artist created colorful paintings on canvas while her tail wagged with each brush stroke.

Maura’s artistic path began a year ago when she met her owner Gerria Berryman, who says she’s now a part of the family.

Art is not the only connection between the two, Maura serves as a second set of ears for Berryman — who is a retired Jessamine paramedic and the first female firefighter in Jessamine County.

Around eight years ago, Berryman’s hearing began to deteriorate. She said she got to the point where she could no longer be a paramedic and she didn’t like going out, especially not on her own.

She caught word about Circle Tail, a non-profit organization in Cincinnati, Ohio that provides service and hearing dogs for people with disabilities at no cost to the individual.

She decided to give it a try and received Maura, who turned out to have more to offer than just assistance with hearing.

Maura is working around the clock to hear what her new owner can’t. She knows Berryman’s name, and if someone says it a few times and she doesn’t respond, Maura will tap her on the leg to let her know she is being called, and then take her to the source.

She also does this with unusual sounds such as the doorbell, the microwave timer, and even a leak under the sink.

“They have to be independent workers, Berryman said. “Which means probably, if she wasn’t a service dog, she would be getting into trouble.”

Maura created her first painting a year ago, and it was given to one of Berryman’s friends whose grandson died from Sudden Infant Death Syndrome. Her next painting went to Circle Tail’s charity auction, where it raised $2,300.

“We were amazed,” Berryman said. “And that’s why I taught her to paint, to make money for non-profits.”

Proceeds from Maura’s artwork are donated to nonprofits to give back because Berryman said Maura didn’t cost her anything she would like to return the kindness.

After doing her second painting for Circle Tails, Berryman decided to continue training Maura to paint because she seemed to enjoy doing it so much.

Maura’s paint brushes began as a brush attached to a toilet paper roll with rice in it to keep it from collapsing — an inspiration that came from a college student who taught her dog to paint.

This allows the artistic canine to hold the brush to the canvas, and make colorful strokes with it.

Her current brushes are made from insulation for pipes in the shape of a T. The insulation has a cloth inside it to keep it from collapsing.

“It’s nice and soft and not hard on her mouth,” Berryman said.

Before Maura takes the brush to the canvas, Berryman dabs it into various colors of paint.

“Whether they see colors or not, I can tell you she defiantly has preferences,” she said.

Maura lets Berryman know when she likes a color by lightly biting at it. If she dislikes a color she will refuse to use it.

There is a particular shade of green she is drawn to, so Berryman keeps several tubes of it on hand.

After Maura has a paint brush loaded with her favorite colors, she will tap it onto the canvas a few times and go to Berryman for more paint and periodic treats.

Berryman will flip the canvas when Maura has covered one side it to ensure even coverage, and to make sure the various colors of paint do not smear together.

For the first time ever, Maura painted on a black canvas at the gallery walk. The black canvas boasting an array of colorful brush strokes is titled “Under the Sea.

“That one really tripped her up,” Berryman said.

Berryman will be donating two of Maura’s paintings created during the gallery walk to the Creative Art League of Jessamine County to be auctioned off at the next gallery walk on June 9.

“I think we need to support our county and our community as much as possible,” Berryman said. 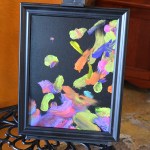 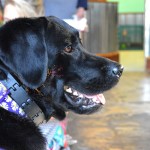 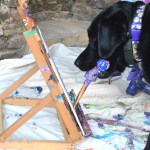 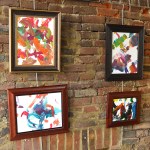 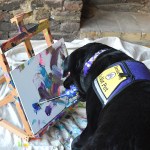 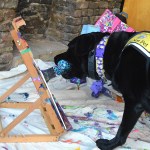