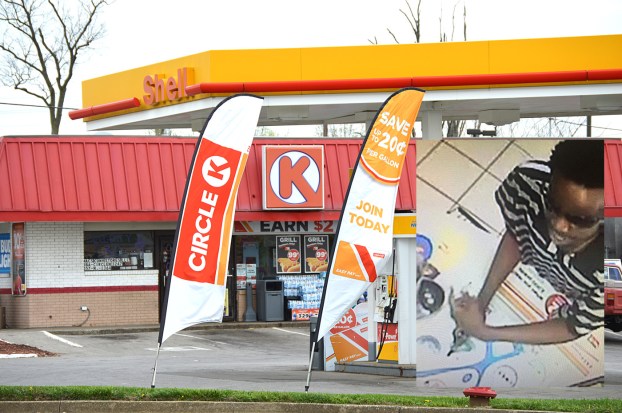 The Jessamine County Sheriff’s Office is searching for suspects in two robberies that occurred within 48 hours at the Circle K convenience store located at 100 Bellerive Boulevard.

In a statement released by Chief Deputy Allen Peel, deputies of The Jessamine County Sheriff’s Office responded to a call at 100 Bellerive Boulevard to investigate an armed robbery at  3:36 a.m. on Sunday, April 9, 2017. Officers arrived at the Circle K store to learn that the suspect, who was described as an African-American male around 5’7 wearing a red bandana covering his face, a black hoodie with the hood up and dark green pants, entered the store armed with a handgun.

The suspect allegedly grabbed the shirt of the clerk on duty and pointed the firearm at him before forcing him to open the cash register. The suspect then fled on foot with an undisclosed amount of cash from the register, as well as several tobacco products. The clerk was not injured in the incident, according to the report.

Then at 4:09 p.m. on Monday afternoon, deputies were dispatched to the same address and store to investigate another armed robbery. According to the report, a suspect described as a 5’8 African-American male weighing roughly 165 pounds displayed what appeared to be a small revolver handgun and took an undisclosed amount of cash. Upon exiting the store, the suspect allegedly robbed a female customer for an undisclosed amount of cash.

The suspect in the second robbery was reported to have fled towards Kroger.

“In both situations, the suspects fled on foot from the store,” Deputy Peel told the Jessamine Journal. “We had a deputy in the area who got there within five minutes of the call, but could not locate any suspects.”

Due to the first suspect’s face being concealed in on camera, Peel said that authorities cannot confirm at this time whether or not both robberies were committed by the same suspect. Peel also said that the Circle K store was the site of a previous robbery a few years ago by a suspect who was captured and charged in connection to other robberies around central Kentucky.

“It was just unusual that it happened in broad daylight,” Peel said of the second incident. “And that the robberies happened two days in a row at the same store.”

Anyone with information, is asked to call the Jessamine County Sheriff’s Office at 859-885-4139.

Plans to upgrade Nicholasville’s Diversicare Center began when the parent company took over on June 1, 2014. Last week, many... read more