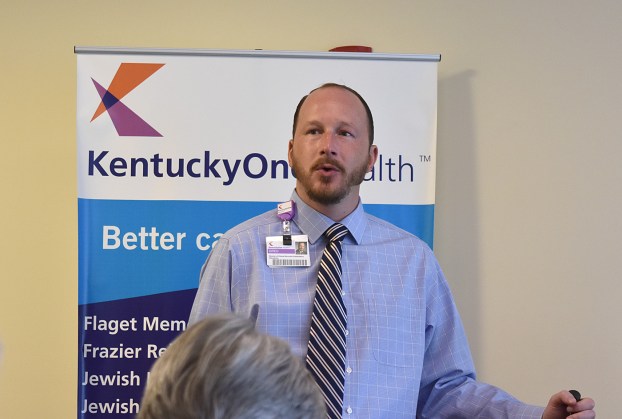 Members of the Jessamine County Chamber of Commerce met at Saint Joseph Jessamine on Tuesday for the April’s monthly luncheon. The event was also attended by Congressman Brett Guthrie (R-KY 2nd District).

Director of Operations Greg Giles welcomed everyone to the event, giving an overview of the facility’s emergency care services. The facility–which has been open since January of 2009–sees an average of 70 patients per day through the Emergency Department, and 30-40 patients per day outpatient.

Giles informed attendees of the new second location of the pain management service, which is coming later this month. The intent of the service, Giles said, was to steer patients away from treating pain with medication and toward therapies and interventions.

Giles then introduced the main speaker and presenter of the program, Market Director of Neurosciences at St. Joseph Jessamine, Kristin Howard, BSN, RN. Howard led the audience through a presentation on strokes, including their causes, their symptoms, proper courses of action to take in the event of having one and treatment methods. She said that strokes were emergencies and catastrophic events, and said that St. Joseph changed its protocol and procedures to be proactive and action-based when dealing with stroke victims.

Strokes are caused when blockages cut off blood flow to the other side of the brain, which causes brain cells to begin dying within minutes. She explained the differences between ischemic and hemorrhagic strokes, and that people of all ages are susceptible if they don’t keep aspects of their health in check. She also explained the F.A.S.T. method of identifying stroke symptoms: facial drooping, arm weakness, speech difficulties and time to call emergency services. Howard told the audience that 20 percent of the stroke volume that St. Joseph Jessamine treats are under the age of 55.

Congressman Guthrie, whose district includes the western part of the county, was pleased with the presentation, and the services that St. Joseph Jessamine makes available.

“It was good for me to see, especially with all of the healthcare debate in Washington,” Guthrie said. He said that he was particularly pleased with the services offered for victims of a stroke, for whom a capable healthcare center in Jessamine County can save the brain cells and even lives for people who would otherwise have to make it to Lexington when time is crucial. Guthrie told the Jessamine Journal that healthcare, and in particular, sustainable insurance options for Americans to use their healthcare, are among the topics he is hearing the most from his district right now.

“The big thing that I am hearing from my constituents is that they are glad that I stood with President Trump in trying to fix the healthcare bill to repeal and replace Obamacare,” Guthrie said. “The problem is Obamacare, if it stays as it is, is that it’s imploding. It’s as insurance people call it, the ‘death spiral.’ The pools of people in the insurance market are not getting the healthy people in, so it is becoming difficult to continue moving forward.”

Guthrie said Congress currently has about 200 that want to go in one direction and about 20 that want to go in another. A change would require 216 votes, and he is hoping that his colleagues can come together to reach that number and get the current health care law changed.