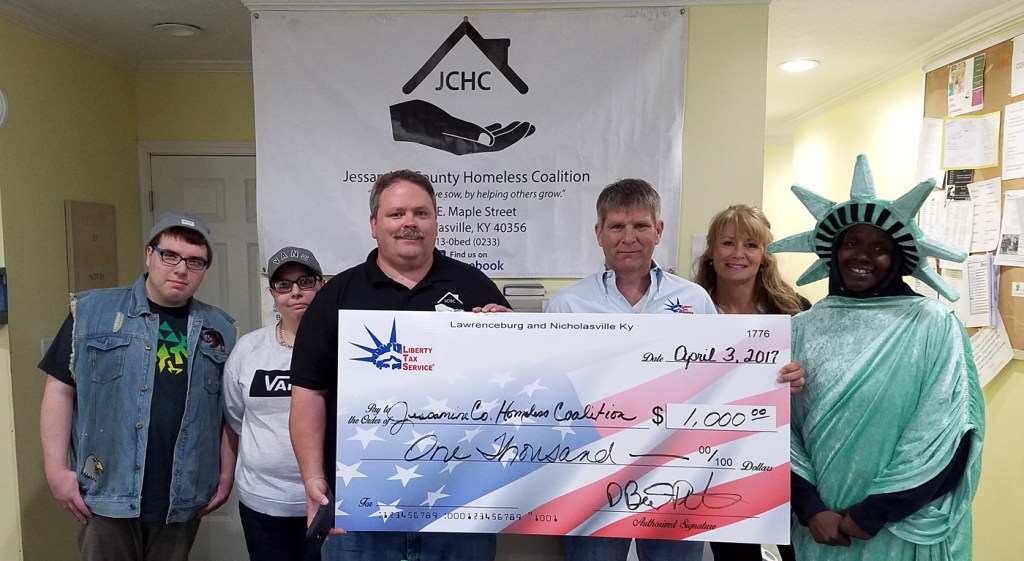 Over the month of March, Nicholasville Liberty Tax office gave its customers the opportunity to assist them in helping out the Jessamine County Homeless Coalition in exchange for free services.

Any new client that utilized the tax preparation services of the Nicholasville Liberty Tax Service office was given the option to donate $50 or more in lieu of their tax preparation fees to the homeless shelter in town.

“Our goal this year was to pick a local charity to support in some form or fashion,” said Brent Peterson, owner of Liberty’s Nicholasville branch. “The homeless shelter here seemed to be the perfect way for us to go directly to the community.”

Peterson said that they collected right at $1,000 for the shelter over the course of the month.

Though Liberty Tax has worked through its corporate office to arrange donations to national organizations and causes in the past, Peterson said that this was the first year that the corporate office granted permission to choose their own local charities to support.

“As local owners, we really appreciated the fact that they allowed us to do that,” Peterson said.

Peterson, who is in his first year in Nicholasville, made a donation to another charitable organization in Lawrenceburg, where he also owns the Liberty Tax office.

Peterson said that the homeless shelter was chosen as the donation recipient in Nicholasville due to several of its clients applying at Liberty Tax to work as mascot wavers outside of the office’s Main Street location. One such waver was Mary Potter, who had recently been helped by the shelter’s service.

“We had been hearing from those folks what a great place it was,” Peterson said of the shelter. “It was a no-brainer for us when we started looking at places locally, because the shelter popped out in our mind.”

Johnny Templin with the Jessamine County Homeless Coalition said that he takes the donation as a sign from above that they are on the right path with the service they are providing to those who need it.

“As a non-profit, finding revenue and fundraising is a never-ending task,” Templin explained. He said that the donation would cover over half a month’s expenses for the four-month-old shelter, which has served 110 local persons in need to date.

Templin said that of all of the shelter’s clients who willingly left the building, over half have had housing and/or a job upon their departure.

“We’ve been able to help in an amazing way, so this [the donation] is really appreciated,” Templin said.

Donations such as Liberty’s help the shelter assist community members such as Mary Potter, who sought help from it in January of this year. For some of its clients, the shelter is a solid rock on which to step to become sturdy again through times of personal turbulence. For others, like Potter, it is an opportunity to start on a brand new path.

“Without them, I wouldn’t be here,” Potter said. “They were my family, and they mended me, they molded me and they showed me what I had to do.”

She attributed the effect that the program had on her life to its spiritual nature.

“There’s a lot of power here because it’s amazing what prayer can do,” Potter explained.

She said that of everything the program gave her, the biggest was herself.

“I love this place, and miss all the people here because there are no friends like Godly friends,” Potter said. “This place is where love is, and what love is. They really help you.”

“Mary has been a wonderful team member,” Liberty Tax Marketing Manager Tina Litkenhus said. “Our wavers are very important to us outside as to let people know that we are open, and they are a big part of our team. People love to see someone out there waving and happy, and Mary has been with us all season.”

“We are very pleased to be able to help with the community and the homeless coalition,” Litkenhus said.

The Nicholasville Homeless Coalition is located at 218 East Maple Street.