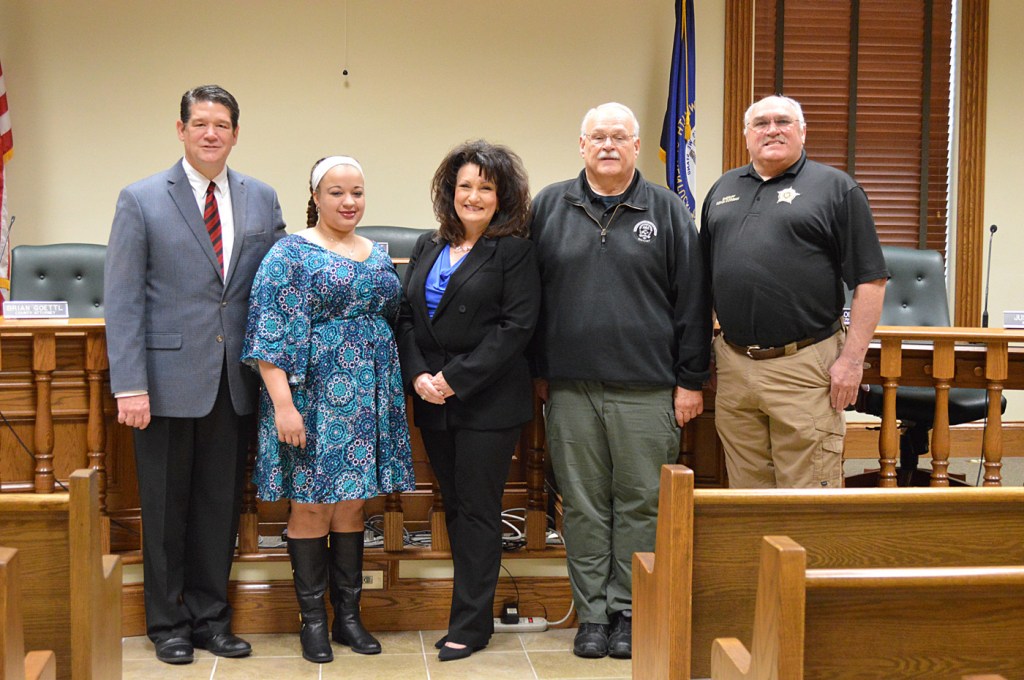 Mendenhall said most victims’ advocate programs in Kentucky are prosecutor-based, but the one in Jessamine County is law enforcement-based. This means the program receives violent crime cases right after they occur, and then they follow the case until it is adjudicated in court.

The goal of the program is to immediately offer services, crisis intervention and referrals to victims of crime — adults and children alike — to help them overcome hardships caused by the crime. They also prepare victims for their role in the criminal justice system.

Once a victim is entered into the program, they are given a needs assessment. Then, Mendenhall and her intern Simone Marx, a Social Justice Studies Major at Eastern Kentucky University, work to remedy those needs, which can include providing housing, providing safety and prepping for their next step in civil or criminal court.

When she began the program, Mendellhall said domestic violence was the most common type of cases she worked.

She said these cases are unique because the victim has an emotional attachment to the perpetrators — such as children, property and marriage — that can complicate matters. She said though domestic violence cases are some of the hardest ones, they are also the most important because family is the foundation of society.

Currently, many of the cases that come into the program are associated with the increasing numbers of drug addiction and the violence that can come with it.

“The program itself has changed tremendously in 20 years,” Mendenhall said.

“Every year they go up,” she said.

While the numbers of victims increase, funding for the program becomes harder to attain.

Every year, Mendenhall applies for a federal grant that allows the program to continue operating and helping the victims of Jessamine County.

“I am honored that this has been approved year after year for 20 years,” Mendenhall said of the funding.

Once the grant is received, the Jessamine County Fiscal Court and the cities of Nicholasville and Wilmore provide a 20 percent match.

Each year, the stipulations for the funding have become more strenuous with strict reporting guidelines from The Office of Victims of Crime’s annual audits for both the program and the financial aspects of it.

“We’re not guaranteed a job year after year,” Mendenhall said.

This is why help from Marx is so appreciated. Though Marx was only required to do an internship for the summer, she has continued her stay for almost a year.

“I love working here,” Marx said. “I love being able to work with victims.”

Marx, a junior who is working toward her Bachelor’s degree, helps with various tasks around the program such as sending out letters, creating folders for new clients, doing needs assessments and conducting follow-ups with clients, all at no charge.

Mendenhall attributes the success of the program to an abundance of people like Marx who are willing to help out, such as legal services, law enforcement agencies, social services, the Salvation Army, food pantries, Habitat for Humanity and the school system.

Though the Jessamine County Crime Victims Advocacy Program is a hub for information and assistance, they are not a single entity.

“We have to have these other programs,” Marx said. “Otherwise, we would not be able to complete the needs that we need to meet.”

Due to the small size of the program, Mendenhall said she was surprised to be named the National Organization for Victim Assistance (NOVA) 2017 Honored Victim Advocate in the category of System-Basted Advocacy. The award is a tribute to her outstanding leadership and tireless efforts to advancing crime victims’ rights.

“I’ve never seen them focus on a small program like the one in Jessamine County,” she said.

Mendenhall — who was nominated by her peers and colleagues — will be recognized for her hard work on NOVA’s website and their social media during National Crime Victims’ Rights Week. On April 5, her profile will appear on NOVA’s website.

Mendenhall is now up for consideration to be a recipient of the Margery Fry Victim Service Practitioner Award. The winner of the award will be announced at the NOVA 43rd Annual Training Event on August 14 – 17 in San Diego, CA.

“It’s absolutely an honor and a privilege to serve the people in Jessamine County,” Mendenhall said.

She said her favorite part of the job is seeing the changes that she can make in the lives of the victims.

“When it really works, and a victim becomes a survivor through intervention, and then, that survivor does not stop there, that’s when I get excited,” Mendenhall said. “To see that survivor no longer being affected by the crime that was forced on them and they become a thriver.”